It’s a common old adage ‘Never mix business with pleasure,’ but these two high-end hair practitioners are good friends who have worked together for more than five years and still find plenty of time to share a drink and a laugh. Linda and Justin even spent a holiday in Thailand together, along with their respective partners. 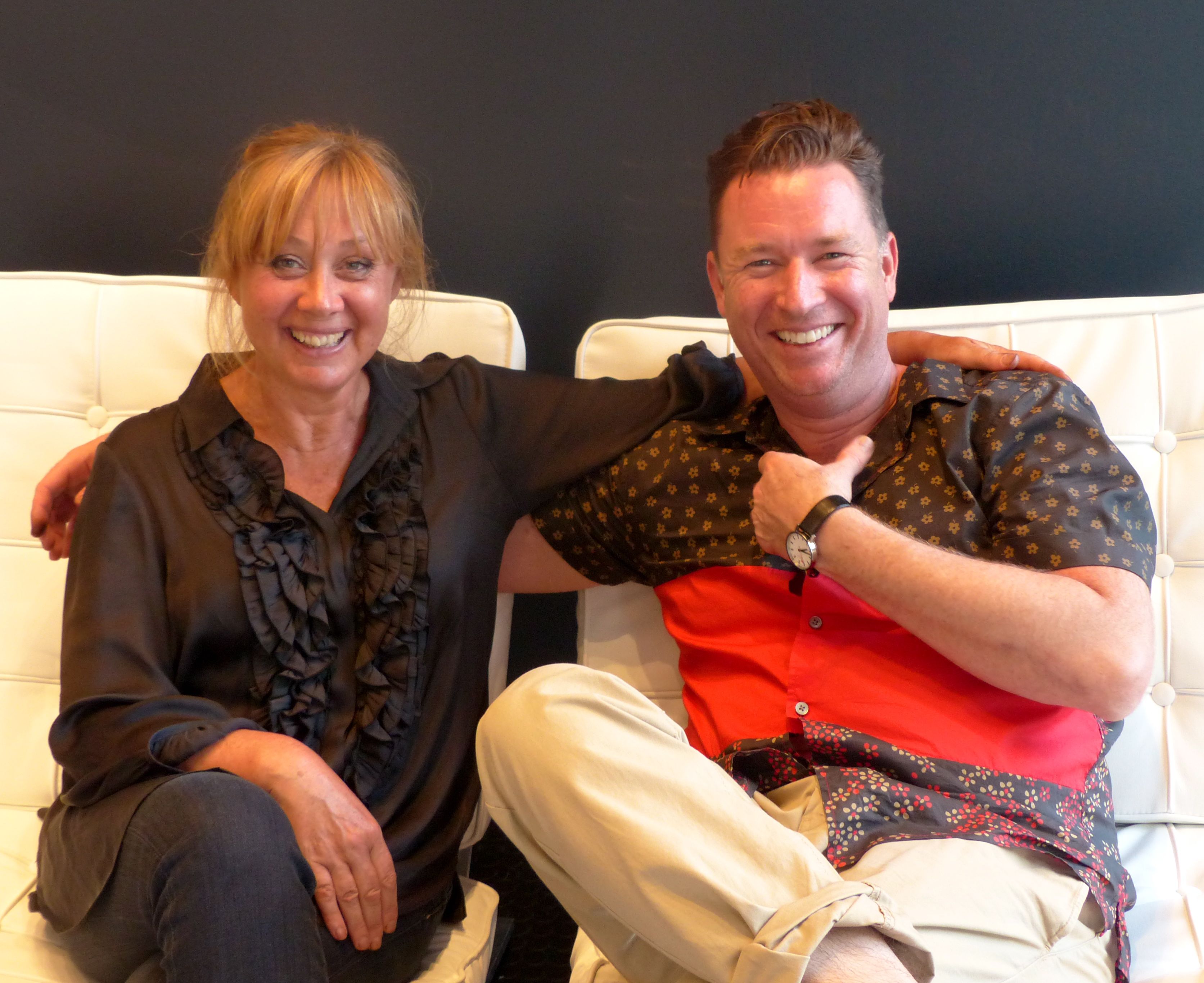 They’ve known each other for years. More than twenty years, in fact. They met back in 1991 when they worked together at South Yarra salon PDF and Justin sported long black hair. (Which he’d rather not discuss…) After a couple of years they went their separate ways.

Then five years ago, Linda was working at a boutique in Prahran where she wasn’t happy.  When a client told her that Justin had opened up his own salon just around the corner in Greville Street, Linda was ecstatic and bolted there as soon as she could to see if they could work together. He happily agreed and asked when she could start.

‘Tomorrow!’ replied Linda. The timing couldn’t have been better. 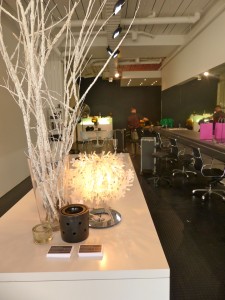 For both, it meant working with an old friend they adored. As well, they have enormous admiration for each other’s respective careers – Justin as a leading hairdresser and Linda being renowned in Melbourne as a brilliant hair colourist. That’s her specialty and means she’s always well booked up in advance. As is the very talented Justin.

Most of all they’re happy to have found a new home in St Kilda, where they opened Salon Golightly last month – conveniently situated just opposite the George Hotel. 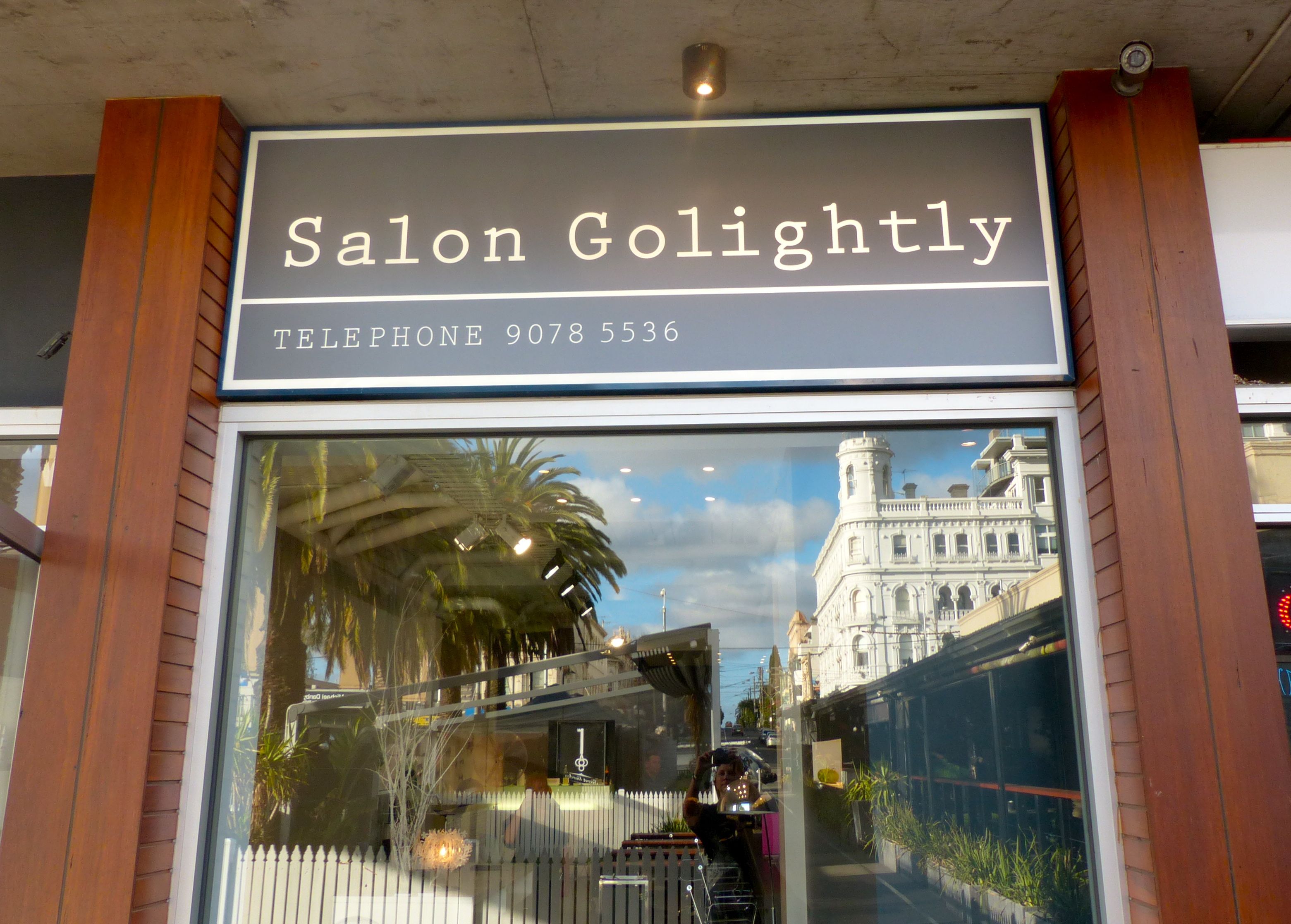 ‘We’re back amongst our people,’ says Linda. ‘There’s more of a cultural mix here. You get a bit of everything in St Kilda. It feels more comfortable.’

Both agree that the hair industry can be a tough business to survive in. It’s highly competitive and egos abound. ‘It’s full of lunatics,’ declares Linda.

So how do they make it work? Being friends and working together? ‘Well I think that’s just it,’ said Linda. ‘That we ARE friends makes it viable. It’s easy. There’s none of that hoo-hah that generally goes on.’

‘So you must have a lot in common?’ I suggest.

‘Our birthdays are on the same day,’ said Linda. ‘The sixth of the sixth.’ Ah, so that explains it!

‘She’s to the point and there’s no bullshit so you always now where you stand,’ said Justin. ‘As much as I love her, she annoys the hell out of me sometimes, but we work in similar ways. We’re hard workers and like to get on with the job.’

And they do work hard. But I also hear them laugh together often. I’ve been seeing Linda to have my hair coloured for nearly twenty years and can vouch for the fact that she’s never been happier. 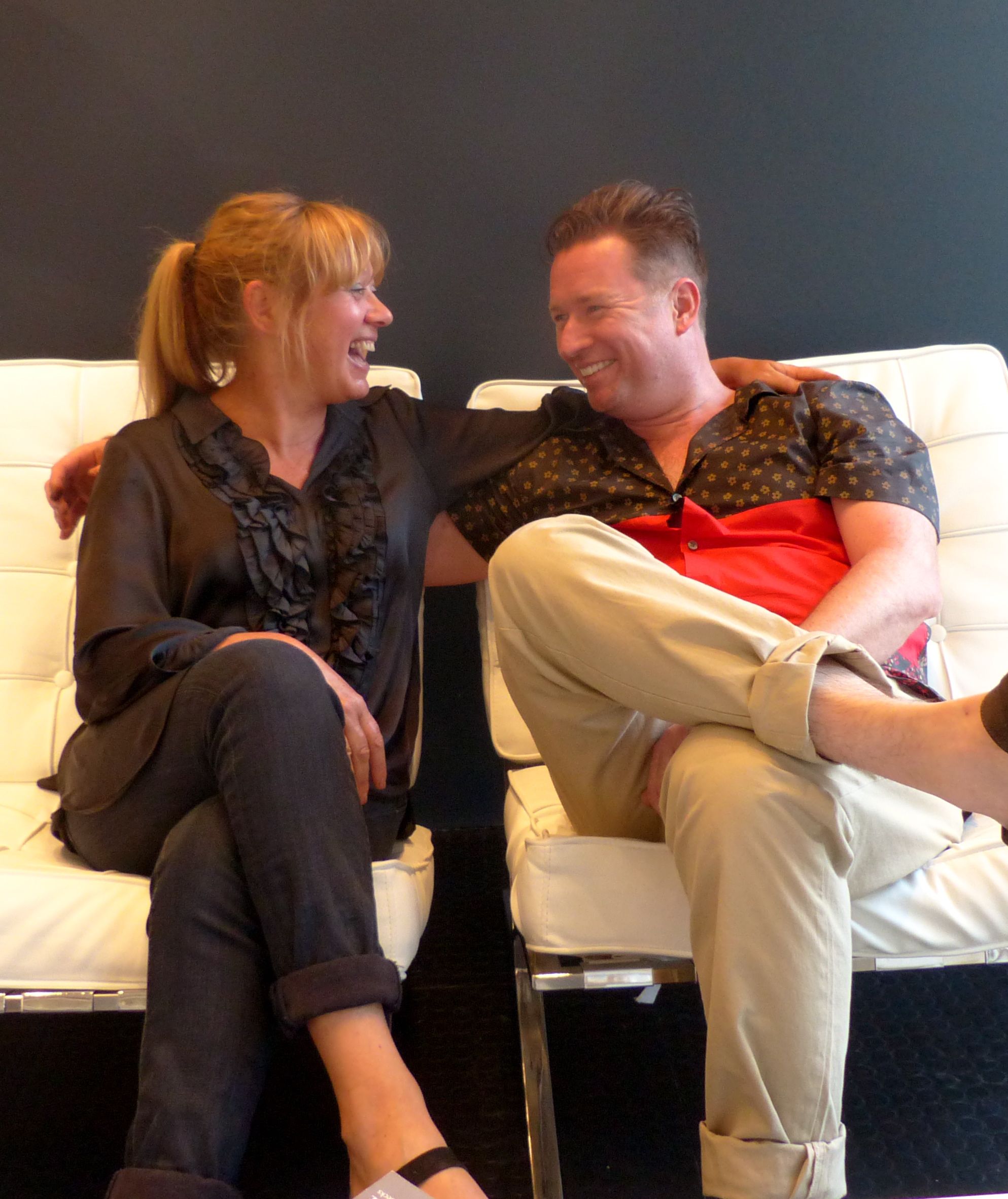 For Linda, there’s another bonus that comes with working with Justin. ‘He loves cleaning!’

‘It’s not that I don’t try. He always does it before I get a chance.’

Justin disagrees. ‘It’s just that she knows what I don’t like doing so she is aware of that and gets in first with those jobs. For instance, I’m happy to clean up wine glasses because if I don’t she’ll break them and leave the lipstick marks on them, but I don’t like cleaning up the tint bowls so she’ll get on and do that.’ 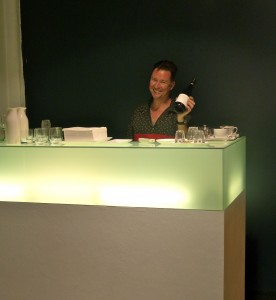 Justin at the bar

Yes, he said ‘wine glasses’. That’s the other lovely service provided at Salon Golightly. There’s a bar at the end of the long room, where Justin will happily double as a bar tender for his loyal clients who fancy a glass of wine toward the end of the day.

Linda also loves the fact that Justin has a wonderful eye for interior design. ‘He always likes to have things looking nice,’ she said. ‘I know when I come to work in the morning, it will all be sorted and look polished.’

‘I try not to involve myself in all that because I know I won’t do as good a job. If I ever suggest something, he just looks at me as if to say, “Don’t bother”.’ Not that Linda’s offended. She loves it. 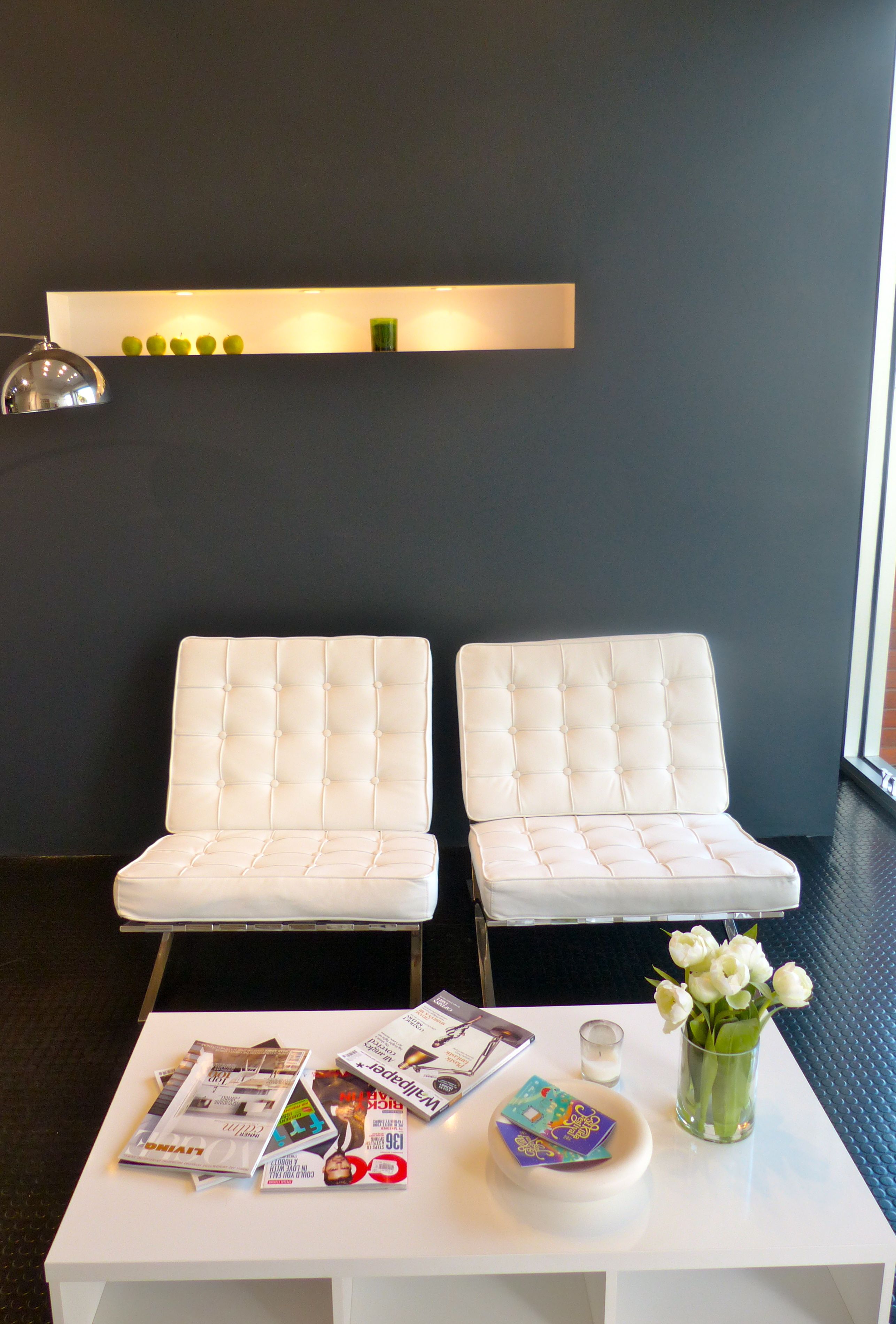 The entrance to Salon Golightly

Would Justin like to turn his hand to interior design? ‘No, I love experimenting but I’d hate doing a job for someone else and not having complete control. Say I did a room then someone wanted to put little knick knacks everywhere…’ He made a face.

‘That would do his head in,’ said Linda. ‘At the same time, I have to say he’s much better at doing something for a hair client that might not suit them than I am. If I have to do something I hate, it’s written all over my face.’ 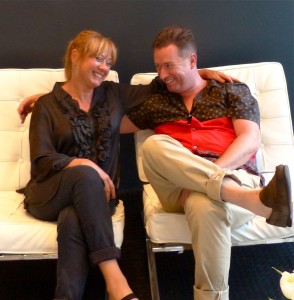 Not that either of them often have difficult clients. If someone’s TOO obnoxious, they won’t take the booking. I know this because when I asked them if they’d ever had to refuse a client, they looked at each other and started laughing.

Justin says he’s always polite. ‘I’ve had clients who come to an appointment, sit in the chair and say, “Last time you cut my hair I hated it and everyone else hated it.” So I ask them why they’re back? Then I suggest that clearly they’re not happy with my work and that they should go somewhere else. Then they generally burst into tears and go to the toilet, come back and apologise and we get on with it. But a few have left and that’s fine. It’s very rare.’

‘I’ve never had that. I just don’t take the calls from those ones,’ said Linda. ‘I don’t want to be tortured. I’m just not interested.’

As for future plans, Justin says they’re looking for one more person to work alongside them in their new salon.

Sounds appealing. A new salon set in the heart of eclectic, beachside St Kilda, opposite the George with two friends who work together like a dream. Now, where is my resume?

If you’re interested in a job or having a wonderful new ‘look’, here’s the details for Salon Golightly: