Given my last Blog post was so very sad and I’m still feeling blue, I decided to cheer myself up by re-visiting one of the happiest times I’ve spent this year – when Fletch and I visited the Greek Islands in late June.

We’d planned this holiday for about two years.  A trip to the Greek Islands to celebrate our 25th wedding anniversary. I’d been trying to get back ever since my time there was cut short more than 25 years ago (more on that later…) and this time around I wanted to make sure the adventure would be perfect. 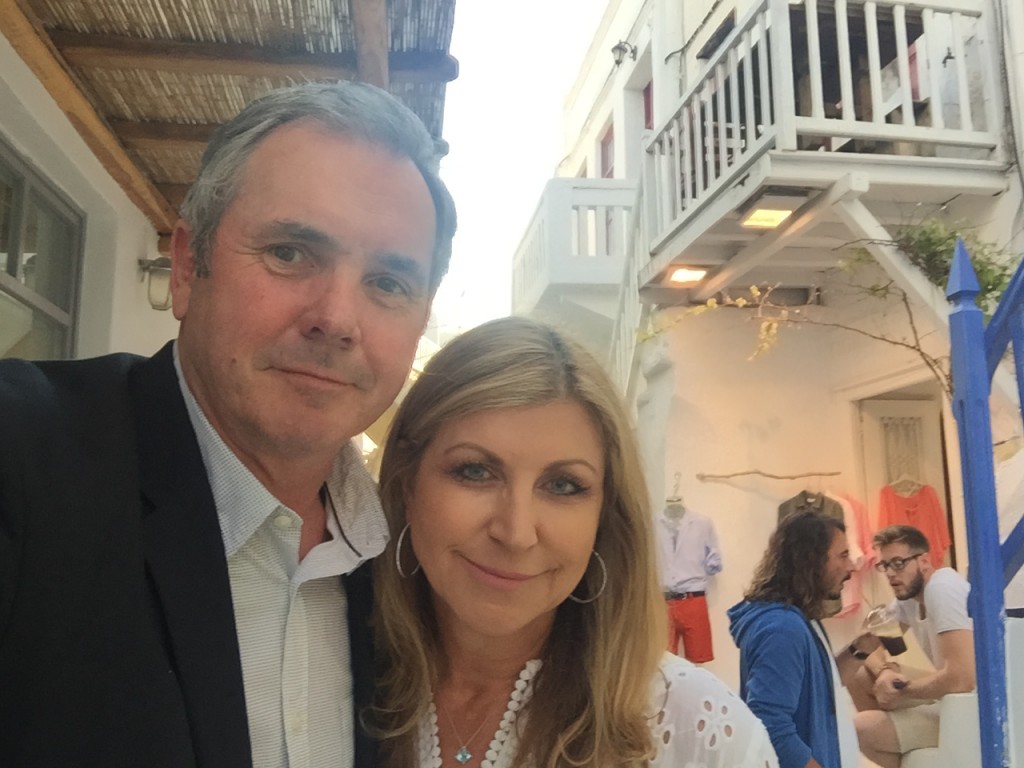 Heading out to dinner in Mykonos

Naturally, I was concerned when we began hearing about the terrible crisis facing the Greek economy about a month before we were due to leave. 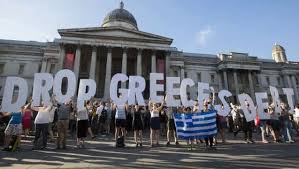 Protests over the economic crisis in Athens

Those fears heightened in the last few weeks with friends and relatives warning us – ‘Ooh, you’d better take heaps of cash. You could get stuck if you can’t use the banks.’

‘Make sure you watch your wallets. There’ll be a spike in petty crime if people can’t get their hands on money!’

‘What if the country can’t afford fuel and the planes stop flying?’

But while the problems caused by the Greek economy on a global scale are enormous, from a tourist’s perspective, there’s little to be concerned about. Taking extra cash isn’t difficult. Being cautious about personal security isn’t too much of an effort. And while I doubted international airlines would ever stop flying, if they DID, I couldn’t think of anything better than being stranded on a Greek Island!

So we packed our bags and jetted off. We landed as the Greek parliament was facing the tough decision about whether to accept new austerity measures or leave the Euro. When we arrived on the island of Santorini, it was a hot topic of discussion on the streets and dominated the BBC news, which I watched in our hotel room. 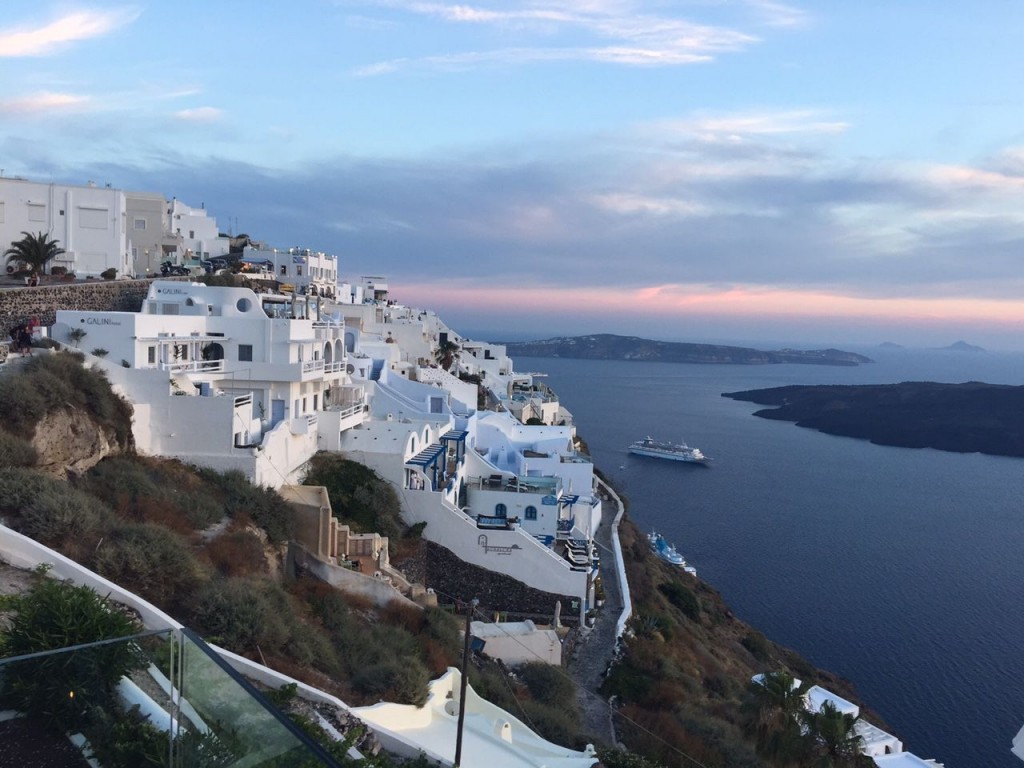 Outside, the island remained largely unaffected. A huge number of cruise ships visiting the islands helped buffer the impact of the banks being closed with hundreds of passengers disembarking with pockets full of cash to spend on shops in Fira and Oia. One jewellery store owner confessed they were also lucky to enjoy tax free breaks from the government that meant during the peak holiday season they were literally ‘raking it in.’

One smaller store – where I bought some locally made silver earrings – asked for cash instead of credit card, saying they knew cash flow would be an on-going problem, so wanted to build up their reserves.

Rallies in Athens were building and long debates were thrashed out in parliament as the tourist islands maintained a ‘business as usual’ attitude. The only indications of concern about the diminishing cash flow came from the increasing number of shops putting up ‘sale’ signs, with most traders also telling customers they’d do a ‘special price’ if they paid in cash rather than with a credit card. 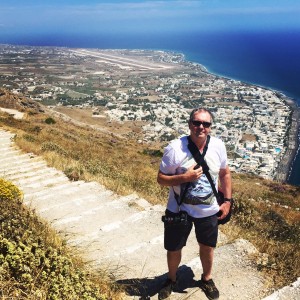 We did the usual ‘touristy’ things – climbed hundreds of steps up a hill to the ancient city of Thira: visited beach clubs with black sand: explored the ancient ruins of Akrotiri and indulged in a cocktail or two…

Perhaps the only side effect for locals was that there were slightly less tourists staying on Santorini, which for us, meant queues at tourist attractions were shorter.

Fletch was happy as there weren’t too many tourists to get in the way of his shots – photography being his passion.

And we definitely had no problems booking a ride on a sailing ship which took us took us to a volcanic island, hot springs and dinner on board as we drifted into a stunning sunset. 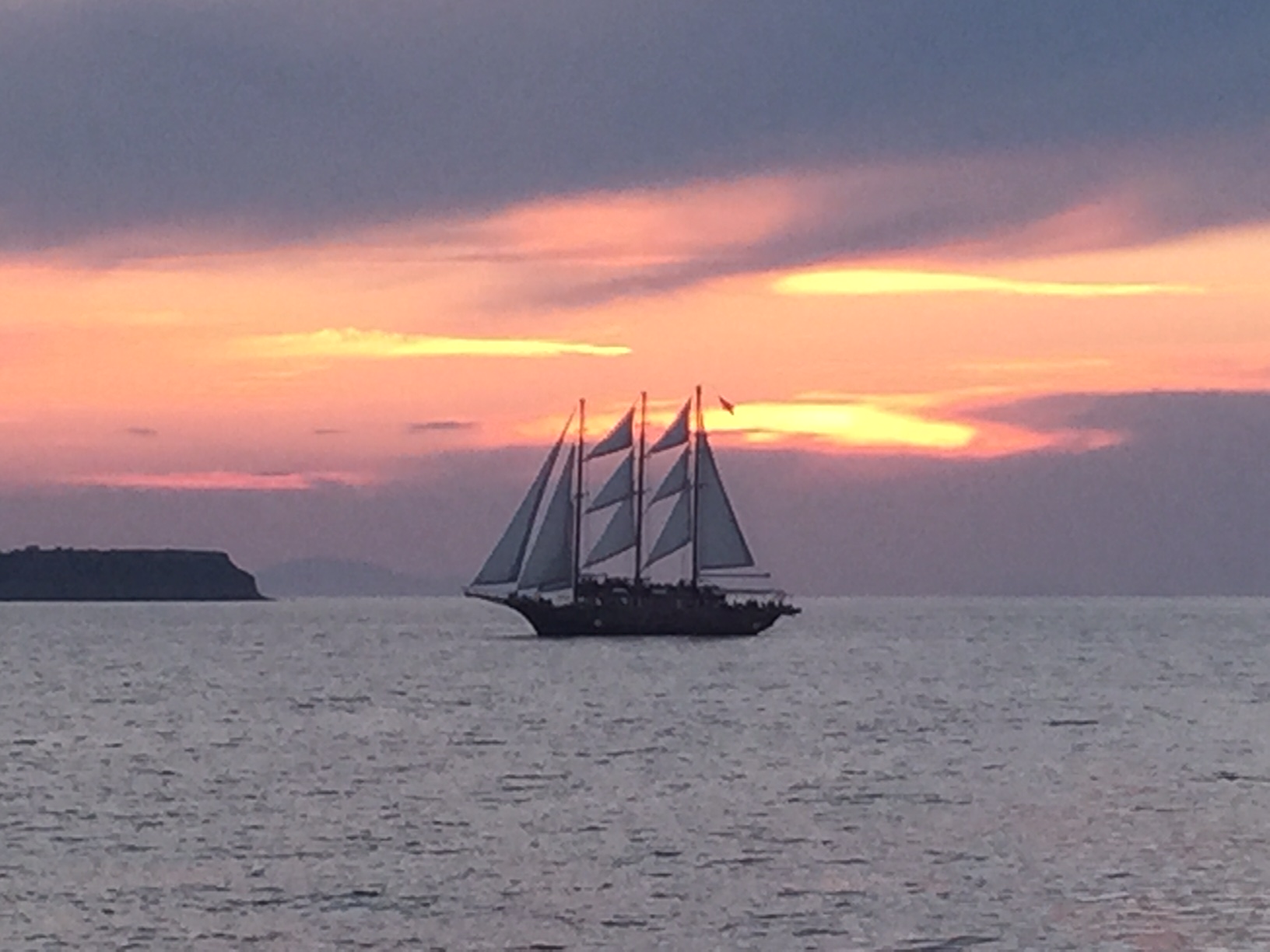 View from the Thalasa sailing ship

Some restaurants and bars let us know they weren’t able to get the same type of fresh produce they’d normally stock because of cash flow issues. They said some suppliers wouldn’t sell fresh food and veggies unless they were paid on the spot.

Again, not a major problem. Although it did create one embarrassing situation for me when I ordered a cocktail. No pineapple juice they said, so you can’t have a pineapple daiquiri.

‘That’s fine,’ I said. ‘What else would you recommend?’

The waiter muttered something then returned with a delicious passionfruit flavored concoction. 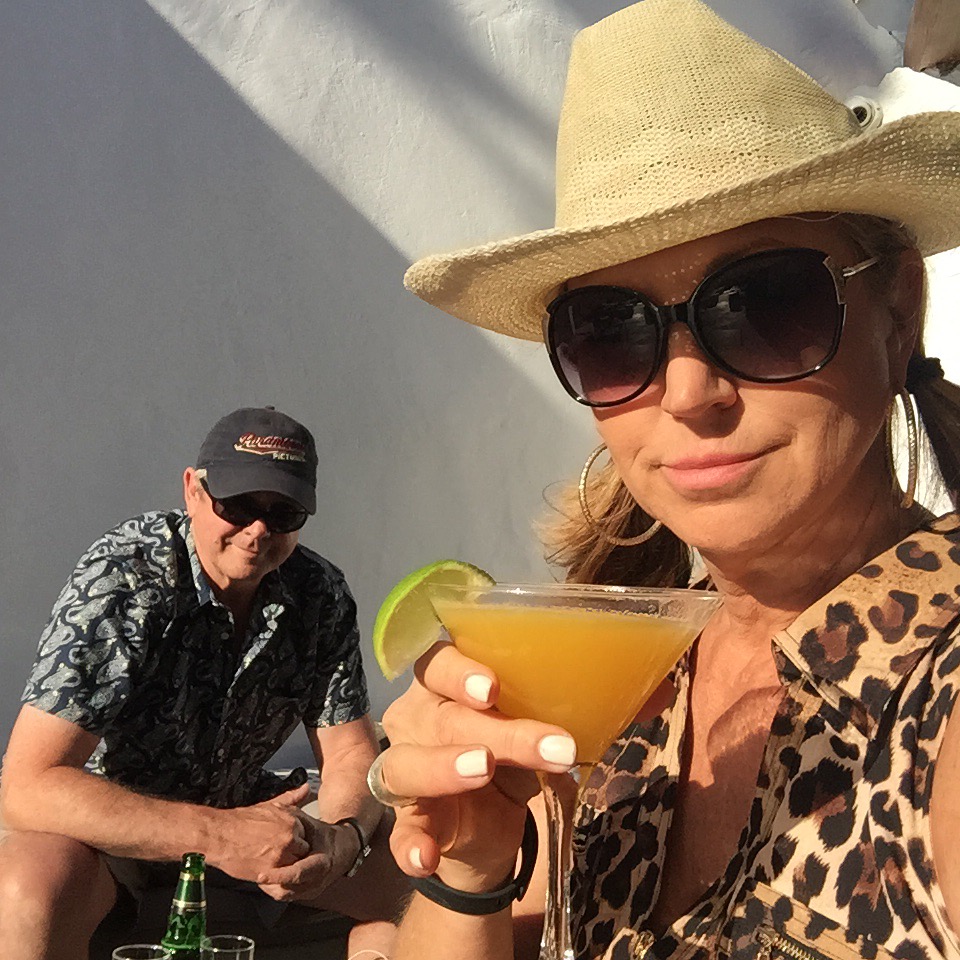 A week later we took the ferry over to Mykonos where again, even as the situation in Athens intensified, all appeared to be smooth sailing for the tourism industry.

We spent says by the pool at the beautiful Cavo Tagoo Hotel and the days passed all to quickly.

The infinity pool at Cavo Tagoo

We arrived in Athens a day before a major rally was being held in front of the country’s Parliament House and again, the Greek economy was the hot topic of conversation. Overall, the locals we spoke with supported the government’s position of staying with the Euro – feeling that to be on their own would only lead to disaster. Others were weary of talking, merely shrugging their shoulders and saying ‘It can’t get much worse than it is now.’ 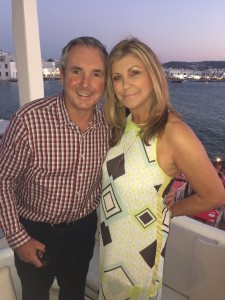 Everywhere we went, café and hotel workers greeted us with overwhelming enthusiasm. They were delighted that any tourist would turn up at a time of crisis to spend their cash in support of their coffers. I have never felt such a warm welcome in any country before.

At one point, there was talk I might do a live cross to a TV brekkie show and I was taken back to a time in the late ’80s where I was visiting Greece for the first time. As a keen young journo I’d given Channel Ten my itinerary, and sure enough, they called me in to report on a horrendous heat wave that claimed the lives of more than a thousand people. I got the call late at night just after I’d arrived on Mykonos and as a result, never even slept in my hotel bed. And I’d been trying to get back for a ‘proper’ holiday ever since.

Fletch getting arty with his camera…

So while I would have been happy to have reported on the financial crisis, part of me was also relieved that this time – more than TWENTY-FIVE years later – I could finally enjoy a holiday in Greece.

On a final note, I didn’t manage to get the time to hop on one of Athen’s tourist attractions that bought a smile to my face every time it rattled on by – the ATHENS HAPPY TRAIN. But it looked like a lot of fun and I think that right now, Athens needs all the tourists it can get. So hop on board folks! 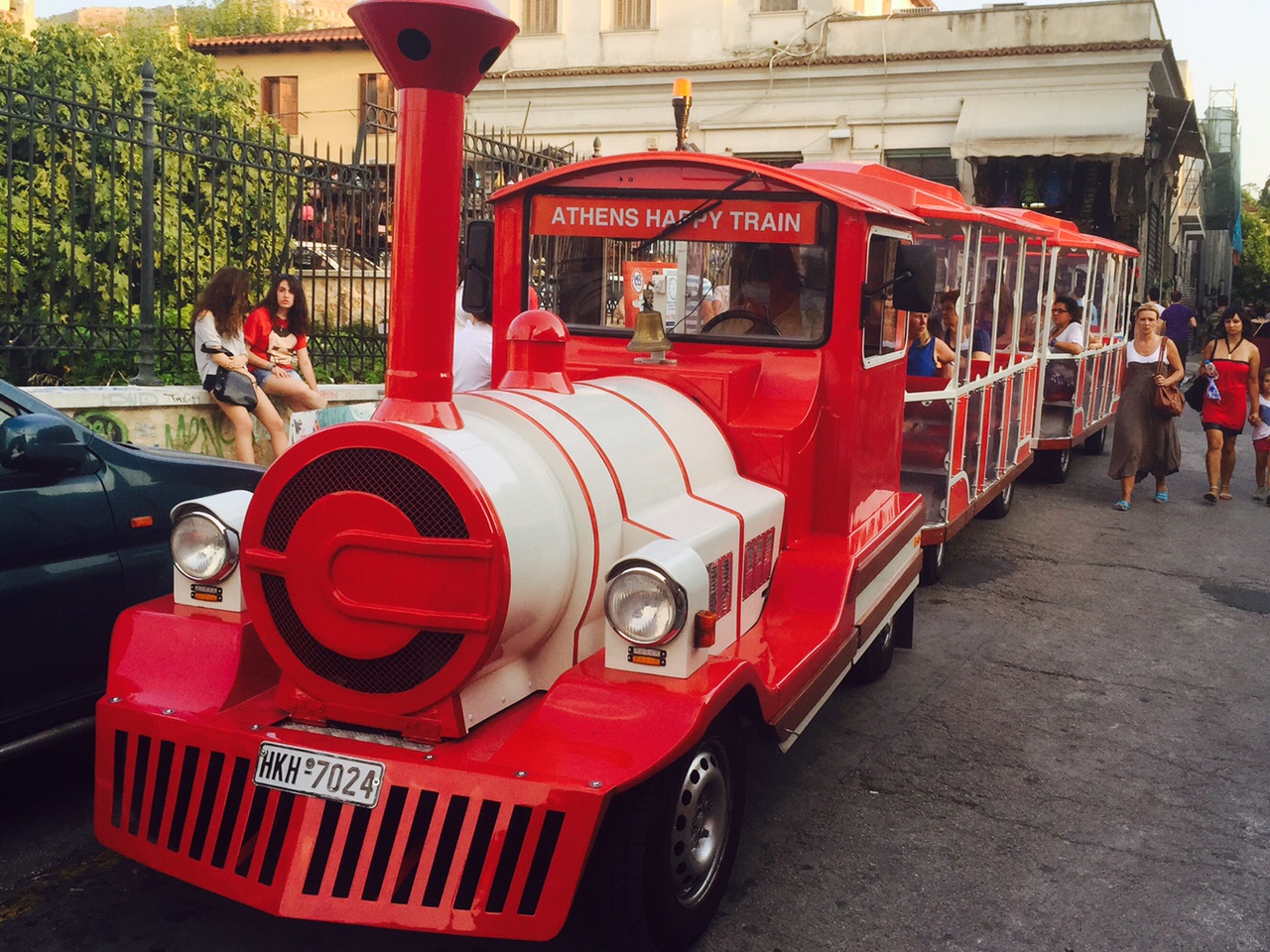 Thank you for following my stories over the past couple of years – it’s been a hoot! And this is not really a farewell – rather an ‘au revoir’ – meaning ‘until later’.

You see, last week I attended two book launches and was very proud to see these extremely talented women, who I am privileged to call friends, stand up and make speeches about their books.

And yes, you should buy and read both. The first I went to was for Clare Strachan, launching her book for young adults – CRACKED – and the second was for my step-sister Sian Prior, for her book – SHY – a memoir.

They are very different books, but both beautifully written and engaging. I am not going to attempt to give you a book review as much has already been written in the media that does the books better justice than I could. 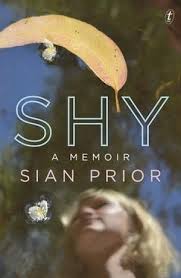 Shy by Sian Prior

For Sian’s book, for example, see these links to read more:

But at these book launches, it hit me like a tonne of bricks…. If I didn’t slow down and pay more attention to my OWN novel, it will never see the light of day.

I watched the movie ‘JOBS’ – about Steve Job’s life – the other day and one quote struck a chord and stayed with me:

‘Be as simple as you can be. You will be astonished to see how uncomplicated and happy your life will become.’

And so that is what I am going to do. You see, now that I’m working at smoothfm, on the Mike Perso More Music Breakfast Show, the time I spend on creative writing has become even more limited. And precious.

Hence something has to give. And it turns out the Blog is that thing.

So until I can’t help myself and HAVE to write to you about something, I am signing off until this book is finished. THEN I will really have something to write about!