There’s a lot of guys out there who simply ‘don’t get’ the Booty Up product. When you take it out of the box, as I unfortunately did when I met with a male friend at an outdoor cafe, he squealed with excitement, ‘I didn’t know you’d invented a sex toy!”

NO. It is NOT a sex toy. Don’t be ridiculous.

But yes, I did invent it. And that’s because I just happen to be a very organised, bordering on compulsive-obsession person when it comes to my wardrobe. I’m not like that about stacks of other things, but shoes and boots in particular? Yes. So I found it very tiresome that my boots would fall on top of each other and develop creases in the leather from not standing upright. Stuffing them with newspaper was annoying and boot-trees were either difficult to find in stores or way too expensive. I decided there had to be a better solution, And that’s when I came up with the concept for Booty Up.

The idea is a ‘new take’ on the old-fashioned boot-tree. A simple conical shape with a removable cap, Booty Up fits snugly inside boots, enabling them to stand upright, thus preserving their shape and preventing ‘boot droop’. I call it Viagra for boots. 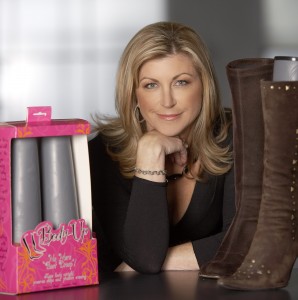 The cap on the top is removable in case you need to add some extra weight to give boots with very fine, high heels more stability. It also has a decorative design down both sides of the cone, giving it an elegant touch.

Another wonderful side bonus of inventing Booty Up, is that my sister, Jill and I then took the product to the Las Vegas International Shoe Fair, with the idea of shipping it overseas. Unfortunately the GFC raised its ugly head not long after, so we decided it was too risky an investment at the time, although it’s still something we’re looking at. But in the meantime, we had a blast in Vegas. 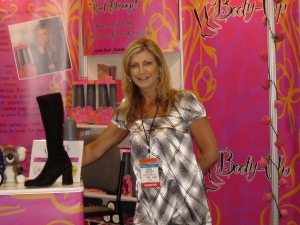 We have been providing Myer with the Booty Up product for the past three years. It’s in stock in the shoe department and sells for $24.95.

Or if you email me direct at jhansen@ubersavvy.com.au, we can pop one in the mail for you. (plus postage costs)