It’s the toughest time of year for VCE students who are right in the middle of exams and facing intense pressure to do their best. I remember it myself like it was yesterday and now I’m watching my son Tom go through the same ordeal. But is it the same? Is it worse for students these days because competition to get into tertiary courses is more fierce or is it all relative? 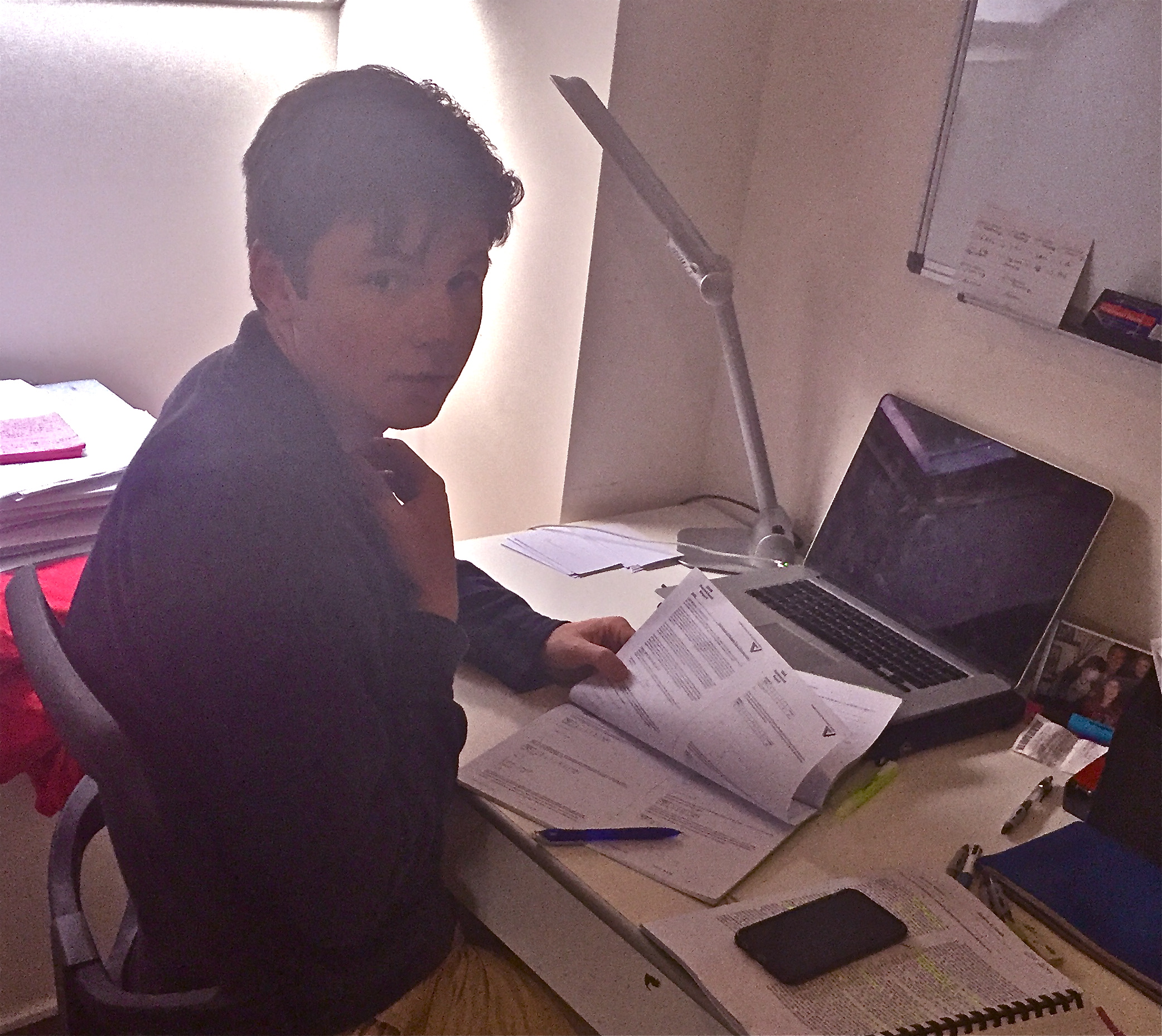 With so much media focus on how difficult a time it is for students, I thought I’d try and get some answers from some teenagers themselves. That can be hard – particularly with young men – so I decided to take Tom (who has just turned 18) out to lunch, along with my sixteen-year-old nephew, Jesper, who is facing Year 10 exams, to ask them first-hand how they are coping. Which they found highly amusing… 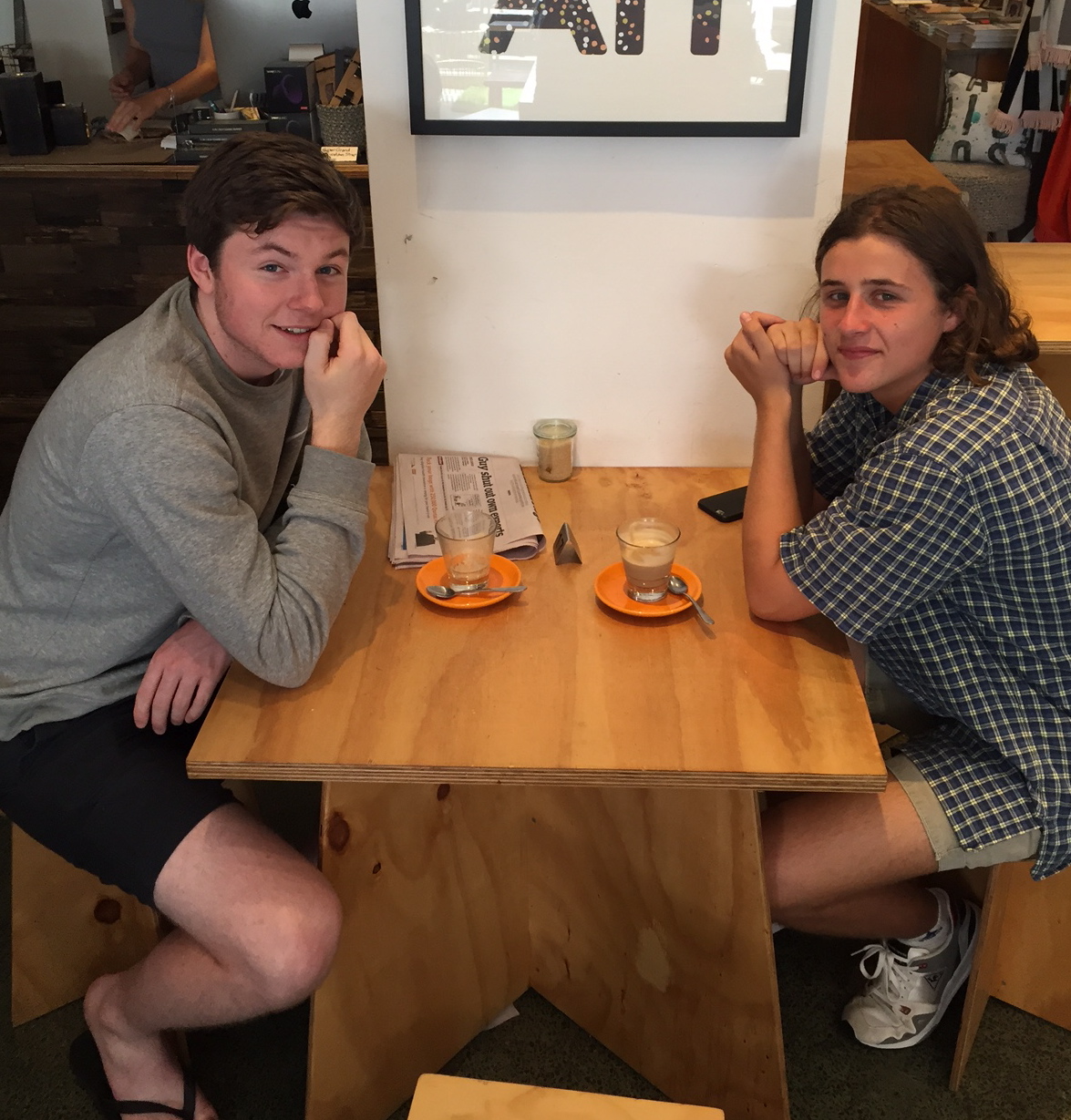 Out to lunch with Tom and Jesper

Here’s how our chat went.

JESPER: I think it’s pretty low key because it’s not relevant to my VCE score. It’s the last year where it doesn’t count. And the subjects I’m doing now, I’m not doing next year, apart from English, so it doesn’t matter so much. I can just cruise through. 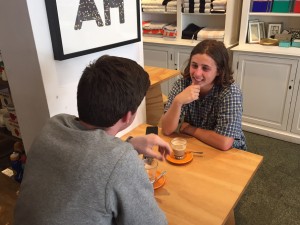 JEN: Have you got an idea about what you want to do after school yet? Is there a lot of pressure to make up your mind early on?

JEN: And Tom you’re right in the middle of Year 12 exams. How are you finding it?

TOM: It’s a pleasure to be here. (heavy sarcasm and comedic tone) Jennifer, great question firstly, and thank you again for having me here.

JEN: If you’re going to be a politician, you’re going to have to stop the avoidance tactics and learn to answer the question. Oh hang on, no, you’ll be a great politician… So HOW ARE YOU COPING with the pressure of exams?

TOM: Another good question. No, it’s a lot of pressure. These are last exams I’ll ever do at school. Lot of people make you feel like you’re whole future is hanging in the balance when you go into those exams, so yes, a lot of pressure. You’re hands shake a bit when you’re writing answers sometimes, so a decent amount of pressure.

JEN: You told me about one of your mates who was so terrified before an exam that he couldn’t even face being near his friends before walking in to the exam room…

TOM: Yes, one of my friends had to go off into a classroom to be by himself and try and calm down. Then he came outside the exam room where we were all huddled, having a chat, and my friend took himself into a corner. His hands were together his head was down his eyes were closed and it looked like he was praying. So he looked very stressed.

A lot of kids are also really exhausted from studying so much. They put pressure on themselves to do well. And there are a lot of stories about kids having problems with their parents – not getting along at all. The parents want them to study harder and get so angry that a couple of boys have run away from home.

JEN: And how have your parents been?

At least Tom can manage a smile!

TOM: Just atrocious. I’ve detested every second I’ve spent with them. (He’s smiling, so it’s okay…) No, in all seriousness, they’ve been good. Very reasonable expectations – not too much pressure. Although occasionally when I come downstairs to have a break and I’m at the table eating, my mother will say, ‘Gee, study’s going well,’ which is perhaps a bit unfair. Especially at 10.30 at night.

JEN: I’m sorry. I think I said that when I came home after being out so thought you’d been taking it easy all night. Sorry. Jesper, let’s get back to you… (and avoid Tom’s home truths- ouch!) Jesper, when you hear Tom talk about Year 12, does that worry you or do you think you’ll be fine?

JESPER: I think I’ll probably be more relaxed. I’m probably not the brightest kid out there, but at least I know what I want to do so I can focus on that. (He is very bright – and modest!)

JEN: And you’ve got better social skills which is a huge plus. 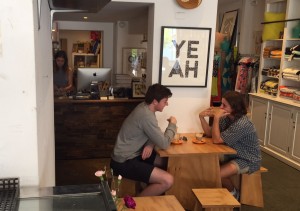 TOM: Does he? Meaning I don’t?

JEN: No, I wasn’t comparing him to you. Just saying that he’s better with people than your average bookworm academic-type. He’s a charmer and that will be a huge plus when he’s persuading clients to take on his interior design work. (much laughter)

TOM: Well, you can’t study for that.

JEN: No, but Tom you’re a charmer too. You have heaps of friends! What are you all planning to do after your last exam to celebrate?

TOM: Just go back to a friend’s house and have a quiet cup of tea and biscuits while we recount stories about school then go home at 9pm and go to bed and have a nice relaxed time. (more laughter)

JEN: Right… So is there much excitement about the end being near?

TOM: Yes, I just got a message from Ted on the way here – a group chat – saying only ‘Nine more days, fellas.’ We’re all looking at the calendar. I have a countdown clock on my computer till the final exam so it will be a fantastic feeling when we finally finish.

JEN: And what do you want to do career-wise?

TOM: Be a stay-at-home parent.

JEN: Oh nice. So how many grandchildren will I be having?

JEN: So you’re planning to move out of home?

TOM: I’m planning to live with my parents forever.

JEN: You might need to get a job to feed that many tiny mouths.

TOM: Both my parents are in the media so I’ll be fine.

JEN: I think you should be in the media. 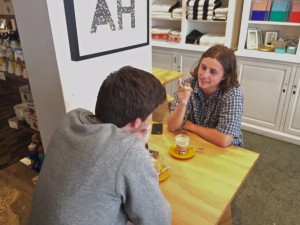 Jesper offers Tom some advice on their radio show together

JEN: And I think Jesper could be in the business too.

TOM: Well, this is where Jesper and I want to announce our new radio show together. Actually it’s a podcast.

JEN: Okay, but can you just get through exams first?

JEN: Then you can be stars. Thanks guys, Good chat. Now get back to the books.

Well I think that went quite well. A few stories about the rigours of Year 12, but ultimately I think Tom’s coping brilliantly. I’m incredibly proud of the hard work he’s put in consistently all year and the marks he’s already achieved.

Good luck Tom for the last two exams next week!

But while it’s been a tough year for VCE students, it’s also been hard on the parents.

Now I’m working on the More Music Brekkie Show with Mike Person at smoothfm, we’ve been chatting all year about both having sons in Year 12 and what we are all going through. Good luck to Will as well!

And while our sons will be letting of steam at the end of it all with SCHOOLIES, we thought it was time to give the parents a special celebration to mark the end of a tough year as well.

So that’s why we’re organising a ‘PARENTIS’ night – next week. If you also have a teenager studying VCE, you can join us AND be in the running to win a trip to India! – See more at: http://www.smoothfm.com.au/station/smooth915/show/mike-perso#sthash.bfBSW3rh.dpuf