I’m the last person to dish out advice on raising children. Generally speaking, I get squeamish around ‘preachy parents’. I’m sure I distanced myself from at least two girlfriends when our kids were born, purely because I couldn’t bear their judgemental attitudes. Breast-feeding debates, nappy ethics and the best sleeping techniques became the force-fed fodder of too many dull conversations. I mean, does it really matter if the cream I use on my baby’s bum isn’t organic??

That said, I did hear a piece of advice on radio last year that piqued my interest. It was about communicating with young teenagers – boys in particular. And because it sounded like fun, we took it on board and bought…. yes, a TABLE TENNIS TABLE!!!

The theory is that boys won’t open up and chat if you sit them down for a talk. They’ll feel under siege and the best you’ll educe is monosyllabic drivel. But give them something to do that will distract them from what you’re hoping to achieve, and gradually they’ll become more and more verbose. Like table tennis! And the beauty of table tennis is that it’s not as physical as ‘proper’ tennis, so you are close enough and not out of breath to enable a conversation to get underway.

A few years earlier, we’d renovated and built a new sunroom. This meant we were able to put a table tennis table up in what was the old lounge room. Otherwise, if you don’t have a spare room or outdoor shed, it’s possible to buy a version that sits on top of a dining table and can be stored upright against a wall when not in use. You can pick one up for around $300 from Rebel Sport or try for one second hand.

I don’t think we’ve ever had a problem communicating with our 14-year-old son Tom, (who is practically perfect apart from an inability to pick up clothes from his bedroom floor) but the regular playing of matches between the two of us has become our favourite shared pastime. There’s so much more I know about the minutia of his world because of that little yellow ball.

But don’t think it’s all fun and laughter. We are highly competitive. When we first started playing, I always won. Yep, I’m the bitch-Mum who hates to lose – even to her kids to make them feel better… Actually, I can justify this. I’m sure it’s the right thing to do. That way, when they win FOR REAL, they can taste the sweet joy of genuine victory. Plus, kids are smart. They know a patronising ‘Ooops, I hit it out the window again….’ from mum or dad’s.

Tom’s getting smart though. He knows when to pick his moments. I came home from an early dinner with a girlfriend last week and he knew I’d had a few glasses of wine. Game on, he said…. Amused by my lack of coordination, he decided I needed a handicap. Perhaps he’ll be a comedian? Of course he won. 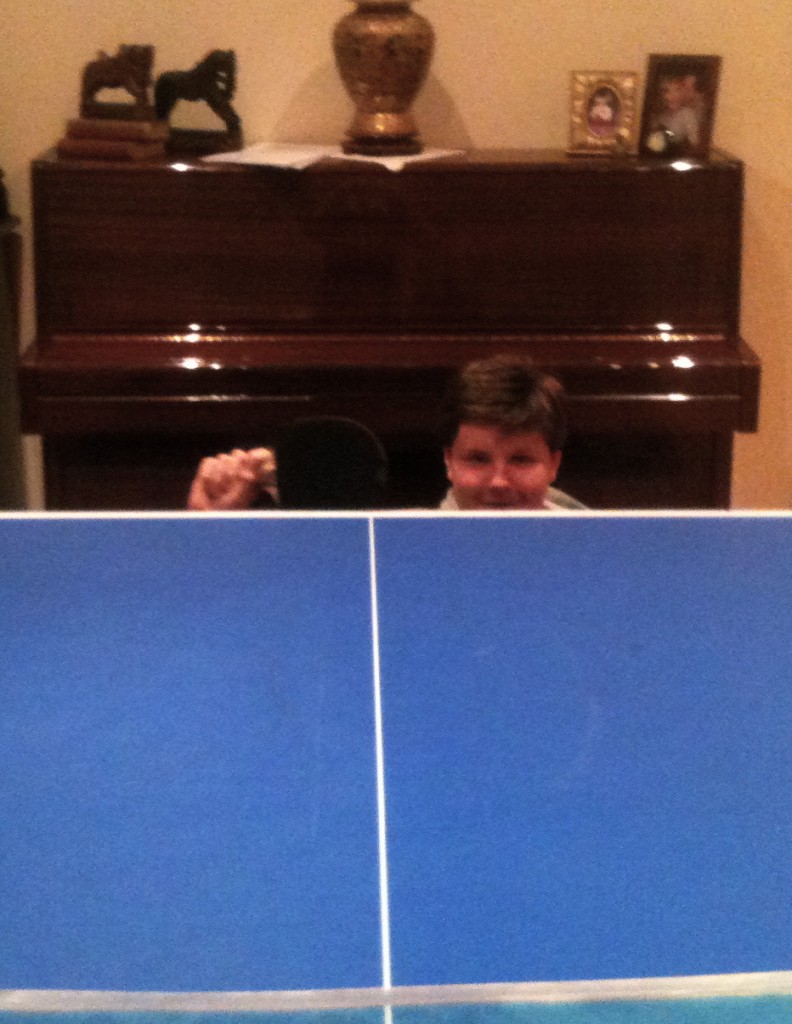 Tom gives his knees a workout

Now Tom is taller than me and and if I accidentally bat him a slow lob, he can smash it back faster than I can see it. It’s very close. I win a match, he wins a match. We seem to alternate and I’m sure it won’t be long before he’s on top of the family ladder. I won’t mind if that happens. I’ll accept defeat with grace. Just as long as I still get that big hug at the end of every match.