I am about to commit a Blogging sin. I promised – in my Welcome message – that if I wrote anything about my husband or kids, I’d run it by them first. Ahhhh geez…. that was months ago and the rules have changed. Well, they change when I want them to. But if this post disappears very quickly, you’ll know the reason. 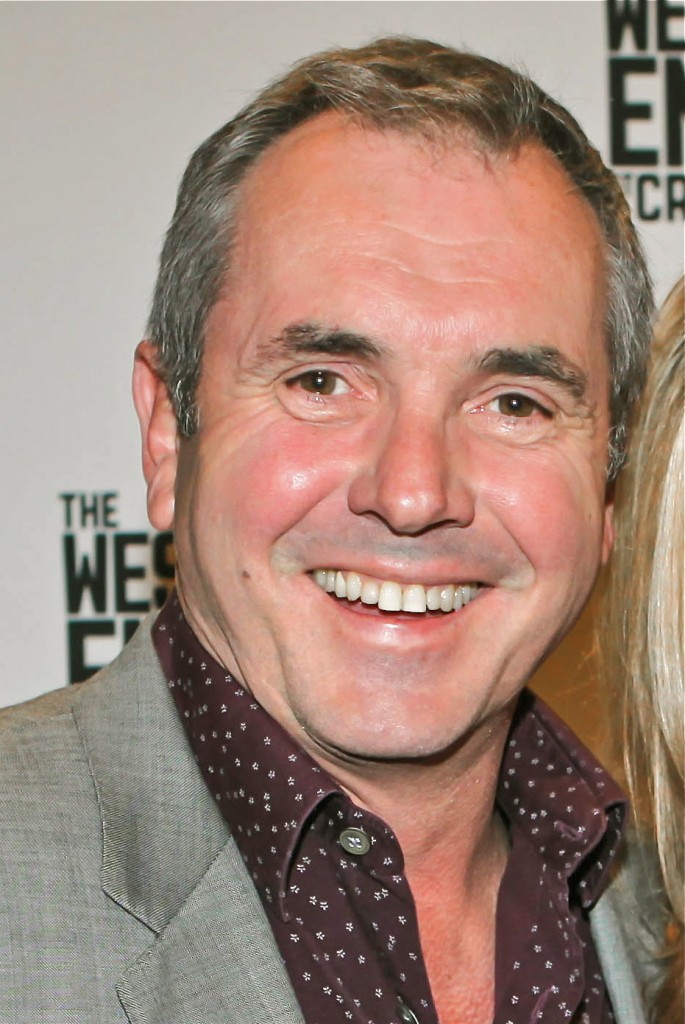 I have a very good husband. A very, VERY good husband who most of you know as Dr Karl Kennedy from Neighbours. You all know the TV show The Good Wife? Well, if they made one called The Good Husband, Fletch would be perfect for the role. Yes, he’s also an extremely talented actor and a lot of you adore him, but if you were married to him, (as in any marriage) – you WOULD find foibles.

Again, I have to say, I am lucky. I know this. He’s not a drug addict, he’s not an alcoholic, he’s not even a gambler, nor has he ever laid a finger upon me except in the nicest possible way. He works hard, contributes domestically, we have fun together and most of the time, we love each other. Yep, a pretty normal relationship, right?

Except that he has one SERIOUS problem. I’ve let it slide without much comment for about a year, but it’s now at the point where this has to be addressed. I want to know if anyone else out there is facing a similar battle. I can sum it up in four words:

CATCH OF THE DAY

The website, that is. Every day, this website advertises a new bargain. Now, maybe it’s born from an actor’s uncertainty about where his next meal ticket is coming from, and even though I try to remind him he’s been on Neighbours for 18 YEARS, it does nothing to deter Fletch from being a Catch Of The Day addict.

What is it about bargain hunting that’s so appealing? It’s not like nailing a wild beast on a a safari – surely? Besides which, Fletch is an animal lover. Is it that the thought of a bargain and saving money excites to the point where one doesn’t consider the value of the item being purchased? I have put up with our house being filled with superfluous objects for too long. For example, we didn’t need any more plastic containers in the kitchen, but Fletch found a bargain on Catch Of The Day that sold a variety of the buggers in a multitude of sizes, promising to keep food fresh till the next century. Now I can’t open a cupboard without being rained on with plastic…

I am also getting tired of being interrupted mid-work on the computer at home, to answer the doorbell to Australia Post. 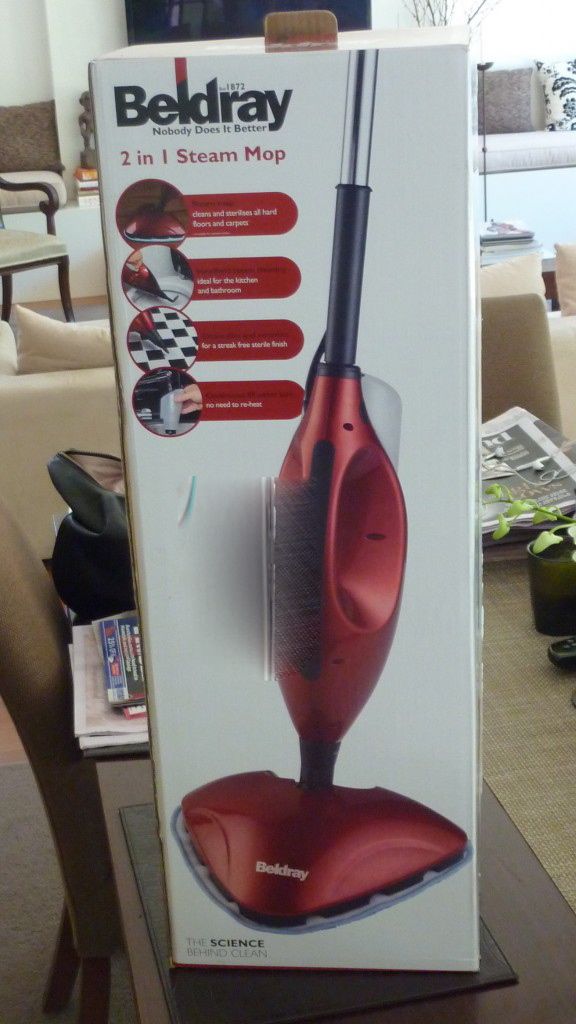 But the piece de resistance came with the grand arrival of the Beldray Steam Mop. Oh. My. God. For some reason, I was expected to be excited upon its arrival. Fletch certainly was. Apparently it was going to save us a bucket load of money, mopping floors and steaming the carpets.

We gave it a test run. The floors got wet – yes. But were they clean?? As far as I could see, there were only residual murky water marks covering the floorboards that hadn’t been there before… I pointed this out. ‘Honey, this actually doesn’t work. The floor looks like crap. Can we return it?’ ‘Hmm, you’re right, he said. ‘Yep, Catch of the Day make it easy. I’ll send it back.’

Wow. I had scored a major victory. For a while, accessories and plastic wrapping accompanying our new steam mop lay on the dining table. After some time, I shifted them into Fletch’s office, knowing he was busy but would surely return the said useless mop as soon as possible. After all, I wasn’t the Catch of the Day addict – it was he who should go to the bother of re-wrapping it and returning it – right?

Several weeks later I went to fetch a broom out of the laundry cupboard. I opened the door and CRASH – everything spilled out over my feet. Brooms, dusters, pans – clattering and falling in slow motion. But standing amid the mess, red, shiny and gloating, was the useless, space-consuming STEAM MOP.

‘ARGHhhhh!!!!’ I screamed. ‘FLETCH!!! What the hell is the steam mop doing in the laundry cupboard?’ Why didn’t you return it???’

Turns out he’d experimented with the mop again and found it quite successful. Skeptical, I proposed he couldn’t be bothered returning it. ‘Oh no,’ he reassured me. ‘It’s fantastic at removing stains from the carpet. I tried it when you were out.’ 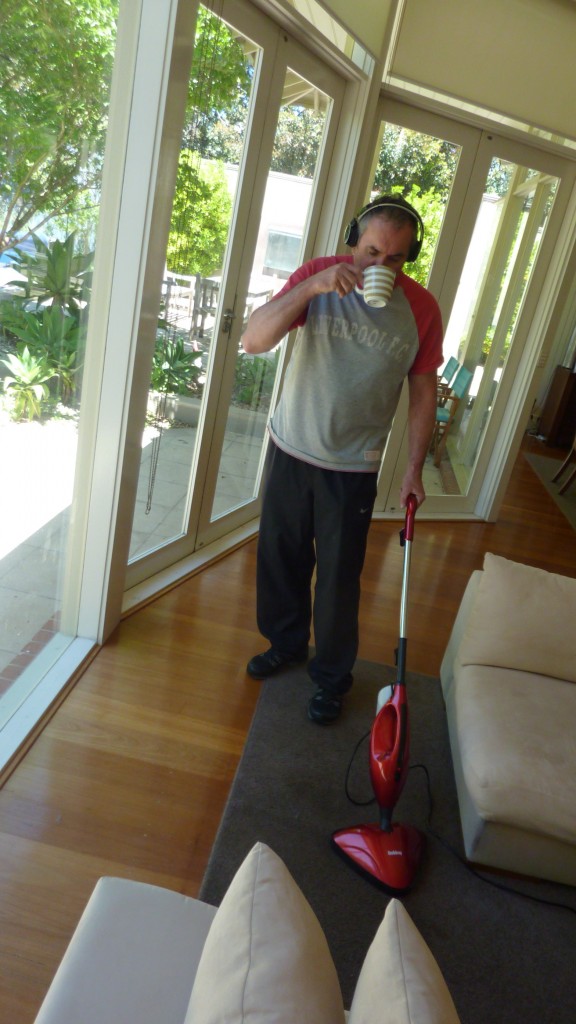 I scornfully denounced such a thing to be possible so he pointed to several carpet stains he’d worked on, marvelling at the improvement.  Quite frankly, I couldn’t see the difference. Determined to prove a point, he set to work on a new set of stains. It’s a bit annoying how he makes housework look like fun. With remote headphones and a cup of fresh coffee, he glided into action. He wasn’t even bothered by me taking photos. Over and over, he ran that mop over a light stain on the carpet. I took a before photo. And an after photo. What do you think?

Hmmm… now I bet you’re all thinking – WHY DIDN”T I GET ONE??

I probably shouldn’t complain. After all, there’s not many men who’d put up with me for starters. But quite frankly, what annoys me most, is that every time I want to use the old basic broom, I spend half an hour trying to extract it from the chaos created in the laundry cupboard. My plan is to make the red beast a garden feature by Christmas. And I bet Fletch won’t even miss the bugger. He’ll be too busy checking out what’s new on Catch of the Day.