Now coming to the end of January, I look back at how I’ve progressed with my New Year’s Resolutions and I’m feeling pretty good about myself. Some have been tougher than others, and I’ve used the holiday break as an excuse for not fulfilling some – but generally speaking, I’m improving. This blogging caper does help enormously too. It makes you accountable – even in a teeny weeny way.

So let’s do an update and I’ll share what I’ve learned along the way.

(1) Sugar free challenge (apart from wine) – to stick to the ONE LINE RULE diet. (which is not eating products that contain more than 5% sugar)
Even though I confessed in Sunday’s blog that I finally broke my sugar fast on Saturday night while watching a movie at the Village Gold Class Cinema and devouring a Choc Top, I’m going to stick with this one. People have asked why, and I have to say one of the main reasons is how I FEEL. I feel happier and healthier and have loads more energy than ever before. That’s why this is the BEST of all my New Year’s resolutions. It really HAS made a difference. I’m not absolutely certain if it’s kicking sugar, or just that (touch wood) life is pretty good right now, giving me a more positive outlook, but I have a hunch it’s got more to do with the sugar business.

I also love the up-myself, smug feeling I get when standing in the supermarket queue with all those rows of sugar-laden chocolate bars staring at me, begging me to buy them. ‘Ha!’ I say to them. ‘Don’t even THINK you can tempt me! I KNOW you are evil and I am strong enough to resist you!!’ Juvenile, but fun. Empowering. 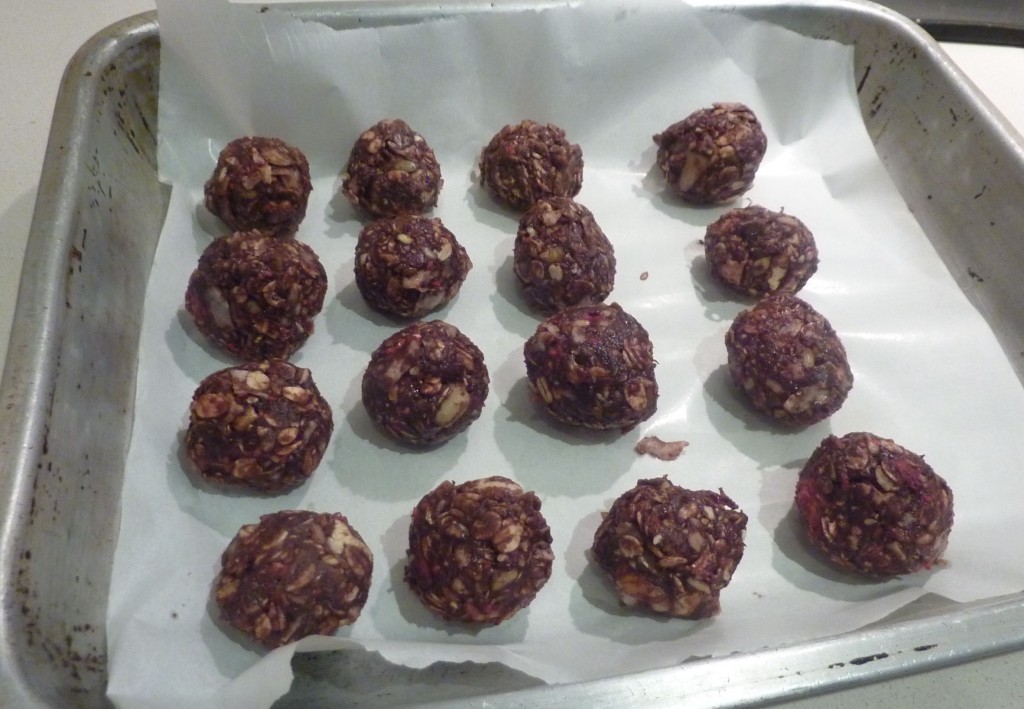 Emma the Guru’s recipe for chocolate protein balls has also been a big winner this week. I just LOVE them and they are now my regular afternoon treat. Just one… most days… Plus I managed THREE alcohol free days – a first in many weeks.

More food updates to come, so stay tuned. But I don’t get a tick for this resolution this week because of the Choc Top moment.

Yes, all good here. A big tick this week.

EXCEPT… that I found a new replacement addiction. I did mention it in a previous Blog, but I’m now going to reveal the evidence. It’s quite brave of me really, because I know many will condemn me for being a complete nerd…

I HAVE SPENT COUNTLESS HOURS PUTTING TOGETHER A JIGSAW PUZZLE. 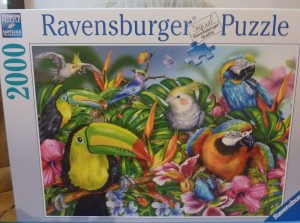 It all started when Veronica asked for a puzzle as one of her Christmas presents. She wanted something more challenging this time, so chose a 2000-piece puzzle. And after Christmas, she invited me to help her put it together. Like most teenagers, she lost interest not far into the game as it proved a tad more challenging than she’d expected…

Except that the rumpus room table was now covered with a barely completed puzzle and I couldn’t bear to pack it away until it had been conquered!

And so the fun began… It became an obsession. I’d start with thinking, ‘I’ll just finish off the parrot’s beak,’ and before I knew it, it was TWO AM!!! 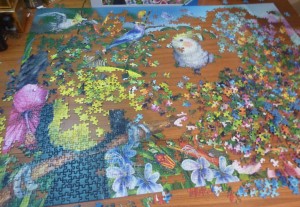 Fletch was becoming quite annoyed. I was neglecting the family and household chores – scurrying away upstairs any moment I could to put this damn thing together.  ‘See – the cockatoo is done!’ I’d squeal with delight. He didn’t get it.

Nor was the family pleased I’d covered the floor with pieces. The jigsaw was taking over our lives. But I did love the fact that being up in the rumpus room meant I spent more time with Tom who would be watching sport or playing Play Station with friends while I puzzled away. Every time I fitted a piece, I’d shout ‘YAY’, to which he had to shout back ‘YAY!’ It was a wonderful bonding ritual. 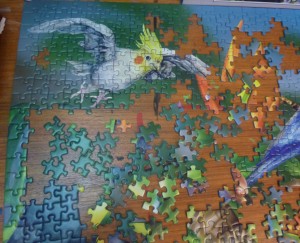 One kind friend suggested my obsession was a reflection of what was happening in my life. That I was figuring stuff out in my head while doing the puzzle and piecing together elements in my life that made sense. I liked that one. I’ll run with that. 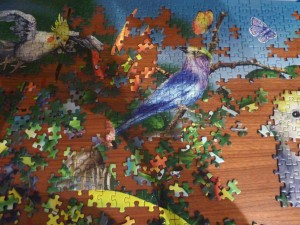 I think Fletch was more concerned I was regressing into a second childhood. But wait – I found evidence on the internet that doing jigsaw puzzles is wonderful exercise for the brain and makes people incredibly smart. Which means I am now a genius. Cool.

As I neared the end, one missing piece from the Toucan’s beak was driving me crazy. I knew it HAD to be green and black with a stripe in the middle – surely not that hard to find? But no, many a lengthy search proved fruitless… I worried the makers had stuffed up and sold me a puzzle minus a vital finishing piece…was my mission pointless???

Then, at two-thirty in the morning, I thought I was done, but STILL the piece was missing. The anxiety was torturous. I had to get to bed!! An easel with newspaper underneath to protect the carpet was next to the table. I shoved it aside and shook out the paper – and SWEET JOY – the missing piece spilled on to the carpet in all its glory. Victory. My mission was complete. Ahhh…. 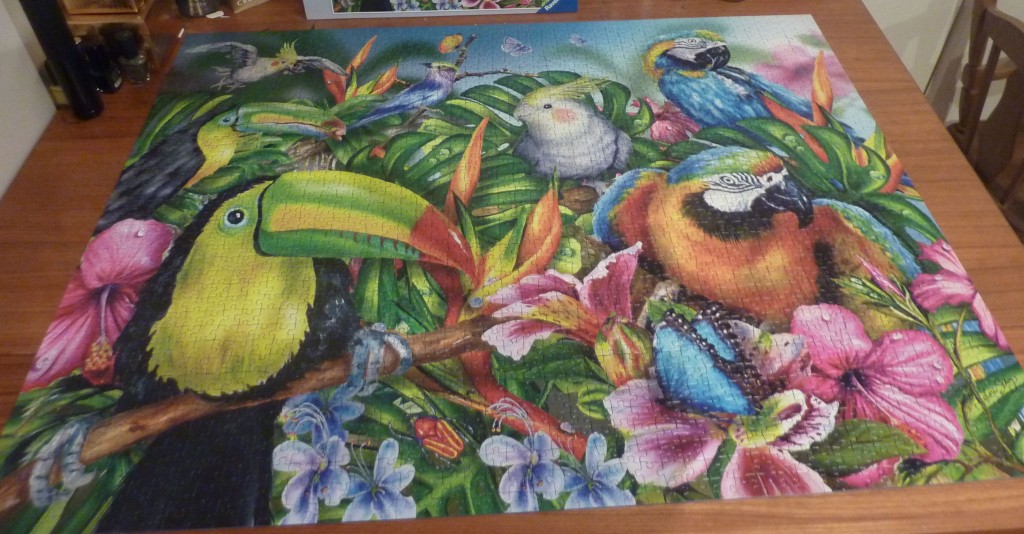 (3) To tidy my office before the end of March.

It’s an on-going, eternal nightmare, but I get a BIG TICK every week till the end of March. The best thing about this resolution is that it means I try to clear away a little bit off the desk each day. So progress, yes, even though it’s just tiny steps.

I did it! I actually got to the gym THREE times PLUS I have enlisted the services of a new personal trainer – Ross Sheridan – who I began work with on Friday. And you know what? If I hadn’t made an appointment to meet him on Friday, I doubt I would have made it to the gym. Hence the value of personal trainers. I really do need to be accountable… Still, very up-myself for making it to the gym three times. A big tick.

(5) To NEVER smoke another cigarette again.

The best part about this resolution is that it really belongs in last year’s resolution basket, and I am pleased to report, it’s SO much easier this year than last year. So, if it’s of any help to smokers out there, it DOES get better. I also suffer much less from smoker’s envy in social situations, which is fantastic. Another big tick.

Overall, checking the scorecard – that’s four ticks out of five this week, so I’m pretty happy.
Until next week!