It’s hard to admit, but yep, Tom was right. At the tender age of fifteen, he knew straight away from the title – The School Of Life – that something was awry. (see Tuesday’s Blog)

Being a huge fan of the author and philosopher Alain de Botton, Fletch had learnt that a branch of this wise man’s school was opening in Melbourne and thought it would be nice for us to go along to an event. It sounded fascinating. A chance to discuss interesting topics with a bunch of smarty-pants types over a feast of food. Maybe I would walk away with new insights into how we live our lives and how to make the world a better place? Surely I’d absorb some of the scholarly vibes through osmosis and magically transform into an intellectually superior being?

It didn’t start well. The floral chair covers sounded warning bells straight away. We arrived after most of the guests were already seated and were told to find a place. Anywhere. Sit with anyone. No nametags and no place names on the tables. Big shared tables. Now, I don’t mind meeting new people, but I’d thought we’d have our own table and the discussions on the night would be mediated by the MC. In a public forum. 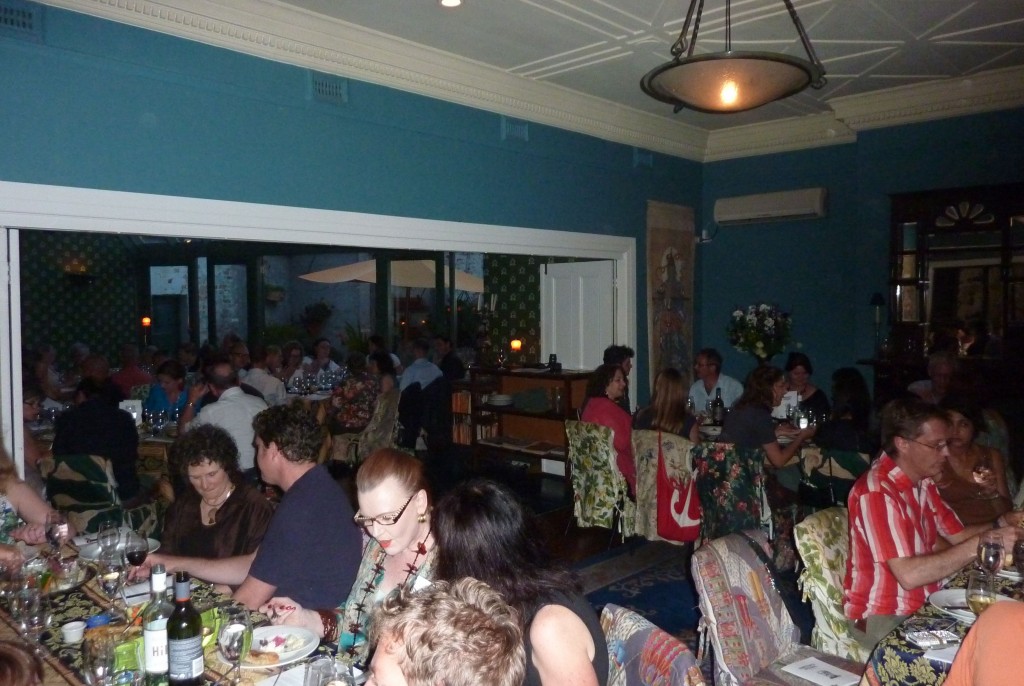 So we joined a table and introduced ourselves. Me, knowing full well, I’d forget all eight names in five seconds. Already I needed a drink. The only wine on the table was sauvignon blanc. As any chardonnay lover knows, you might as well offer a prime rib to a vegan. EWWWWWwwww. I asked a harried waiter if there was an alternative. Looking very put out that I’d even ask, he said there wasn’t. That always, without fail, puts me in a bad mood. A pre-paid set menu dinner and no decent wine. Luckily I have a wonderful husband who knew what was up and quickly raced to the bar to buy bottle. 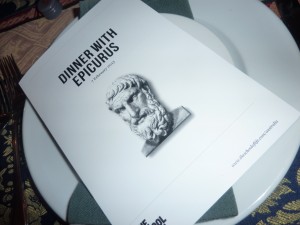 I picked up the program on my bread plate and read some of the topics. Fascinating stuff.  We’d be hearing about things such as:
– Should we try to be happy? If not, what else is there to aim for?
– Is pain ever pleasurable to you, or sadness somehow happy? Why?
– Is love ever really unconditional?
– Does work have to involve drudgery as well as joy?
– When has failure helped you?

And that was just for FIRST COURSE…

Then Damon Young, the Melbourne philosopher and writer employed as MC on the night, began with his introduction. Erudite, witty, pleasant – he kicked proceedings off to a good start.

What I DIDN”T like was discovering that after Damon read out the topics for discussion, we were supposed to chat AMONG OURSELVES. With our new best friends. Over some of the North Firtzroy Star’s fairly ordinary food.

I’m sorry, but you have to know a bit about someone before you get into whether pain is ever pleasurable for them – don’t you? So here’s what I don’t GET about nights like this. Unless the mediator calls for discussion in the room, the guests at the table probably AREN’T going to stick to the topics because they are too busy edging their way around who is who, and who does what, before getting into the deep and meaningful.

So, quite frankly, I couldn’t see the point of any of it. I would have preferred a night out with my friends. I don’t need new friends…. much as the people on our table were very nice.

Me with MC Damon Young

Damon Young was nice too. And an excellent MC. I just think The School of Life needs to look at how they run these nights because I didn’t get anything out of it. Alan said he managed to have several fascinating discussions that stuck to the topics. I missed those.

Guess I’m going to just have to save that program with Epicurus on the cover for our next dinner party and use it as a conversation starter then. Interested? 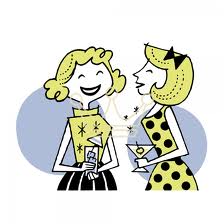