So before you start thinking I’m a spoilt brat who enjoys far too many holidays than she deserves, let me explain. There was a GENUINE reason I HAD to come to Bali this week. I had no choice – seriously. My sister’s fiancé, Pete, phoned me a month ago to say he was going to spring a SURPRISE WEDDING for Jill and wanted me to help with orchestrate the nuptials. How could I say no? 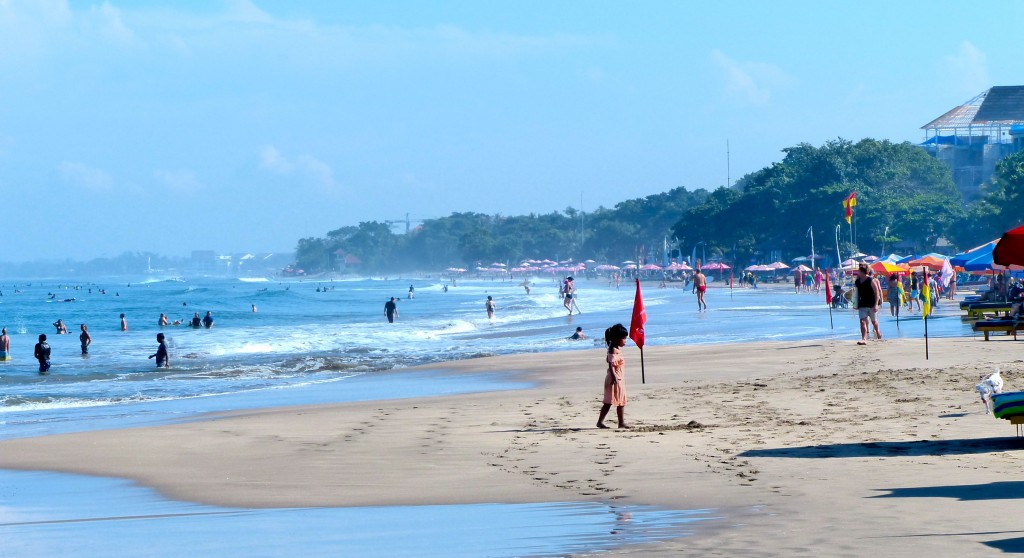 With Jill being so busy with work commitments, Pete knew it was going to be a tough call, locking in a wedding date. She’s also been married before and knew full well how much planning a wedding would involve. So when Pete tried to get her to set a date six months ago, she jokingly replied, ‘It’s too much to organise. You sort it out and I’ll just turn up.’ I don’t think she thought he’d take her so literally.

When it panned out that many of her friends were going to be in Bali at the same time, Pete thought it would be perfect to organise a surprise wedding. Particularly as it was Jill’s birthday on June 25th. It would be simple to get everyone together for a celebration without raising her suspicions.

I wasn’t so sure. Jilly is SO switched on, it’s difficult to keep anything a secret from her! But on the morning of her birthday, when I offered to blow-dry her hair, (because she should look her best at her celebratory dinner!!) she scoffed at the idea, saying she didn’t care. That’s when I was pretty sure she hadn’t twigged. Surely she’d want good hair if she knew she was getting married??

Pete booked a dinner at Bali’s most glamorous seaside restaurant – Kudeta. None of the guests knew until just hours before exactly what was going to happen. There was always the VERY slim possibility she might say ‘no’… so there was a palpable sense of excitement in the air as we gathered for pre-dinner drinks.

The tricky part was getting Jill to the restaurant by 4.30. We needed to kick proceedings off early-ish to make sure we could take photos before the sun went down. So we told a weeny white lie and pretended we had to get there early to secure the sofa area because it’s peak holiday season and the restaurant needed the space for another group booking, It worked and we managed to assemble everyone pretty close to the planned time.

Then we all held our collective breath as we watched Pete take Jill aside and tell her what was about to happen. They had their backs to us, so it was hard to work out exactly what was going on… the only give-away, when she wiped a tear from her eye. 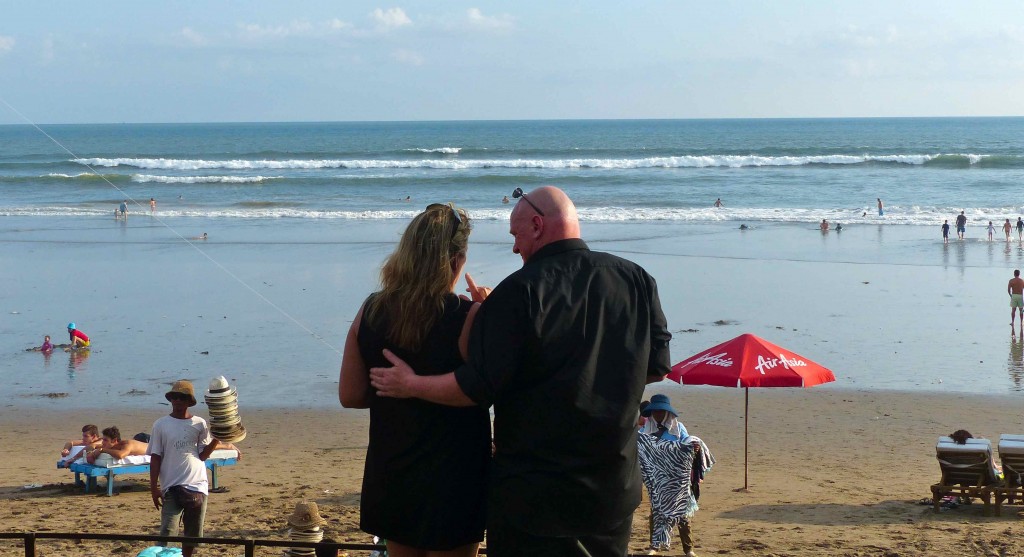 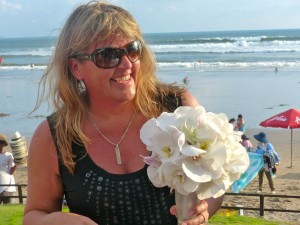 Jill with her bouquet

Then she turned around with a beaming smile and I sighed with relief and handed her a bouquet we’d organised. Plus some flowers for her hair. ‘Damn, I would have put some lippy on if I’d known!’ she laughed.

We’d also organised a marriage celebrant, so Pete led us down to the beach, where we met Kim, to officiate the ceremony. And a very celebrated celebrant I might add – as he just happened to ALSO perform the wedding of Australia’s most gorgeous super-model, Jennifer Hawkins, only a few weeks ago.

The aisle was marked out with scattered rose petals and orchids…

Kim not only spoke beautifully, with sensitively chosen words, but had also prepared a rose-petal strewn beach-aisle for the betrothed couple to walk down.

Then, there they stood. Pete and Jill, who have been together for nine years – finally –  exchanging vows on Legian Beach in Bali. I couldn’t have been more thrilled for my baby sister. I’ll let the pictures tell the story… 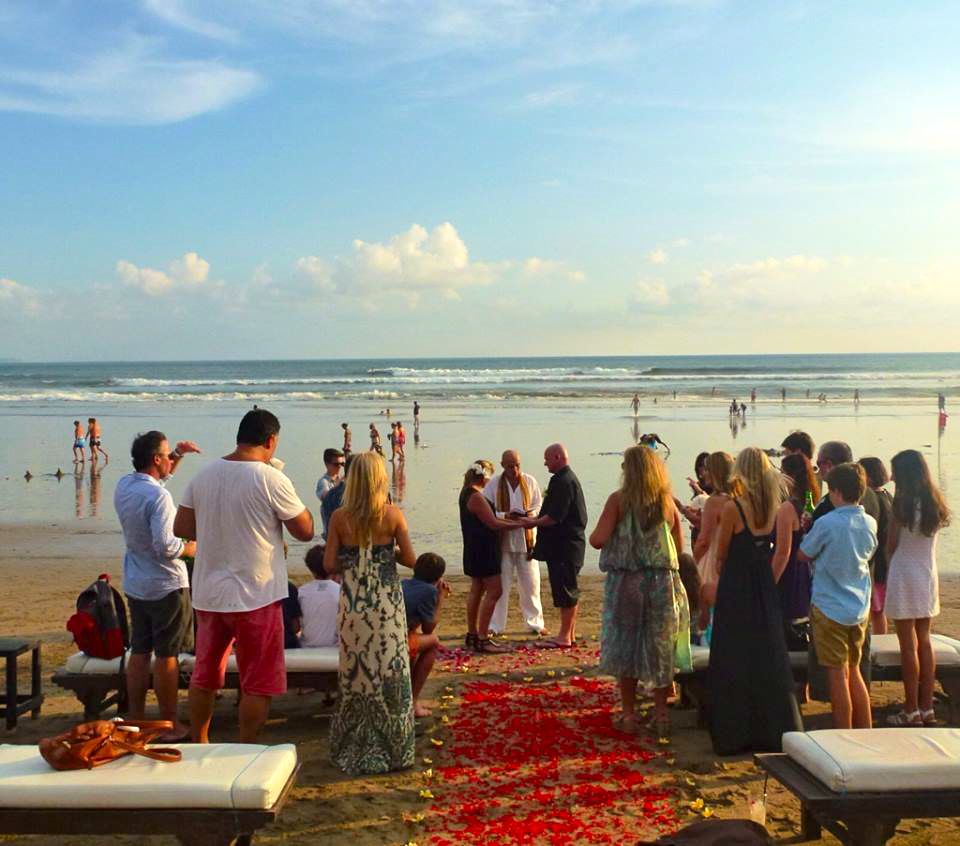 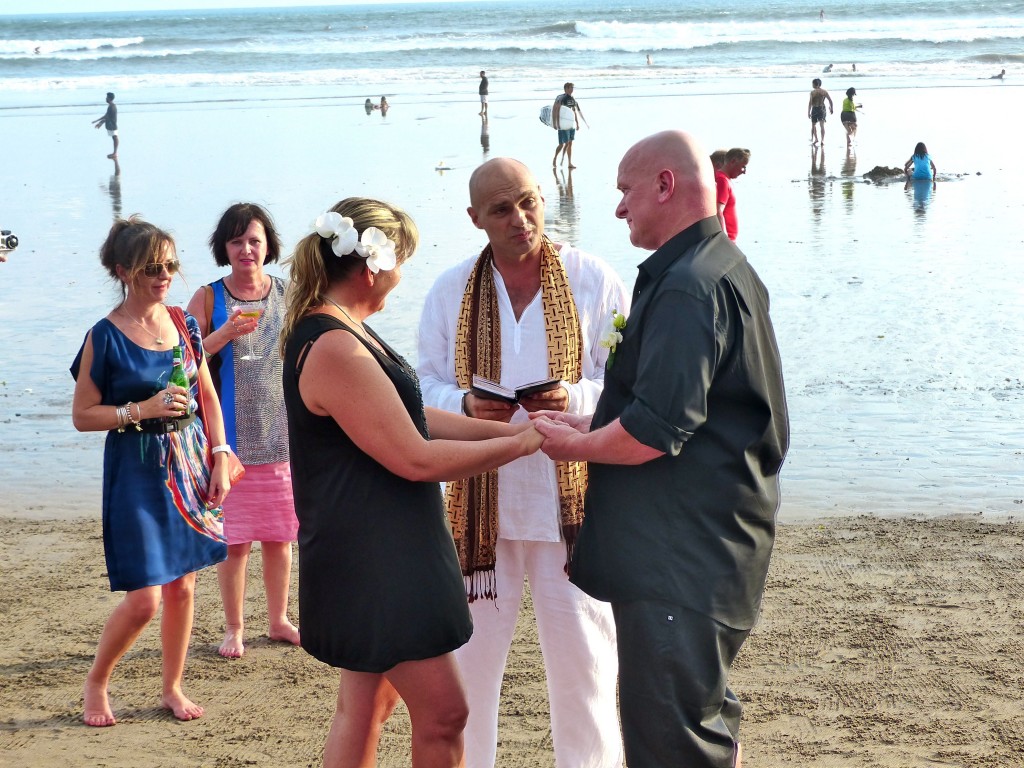 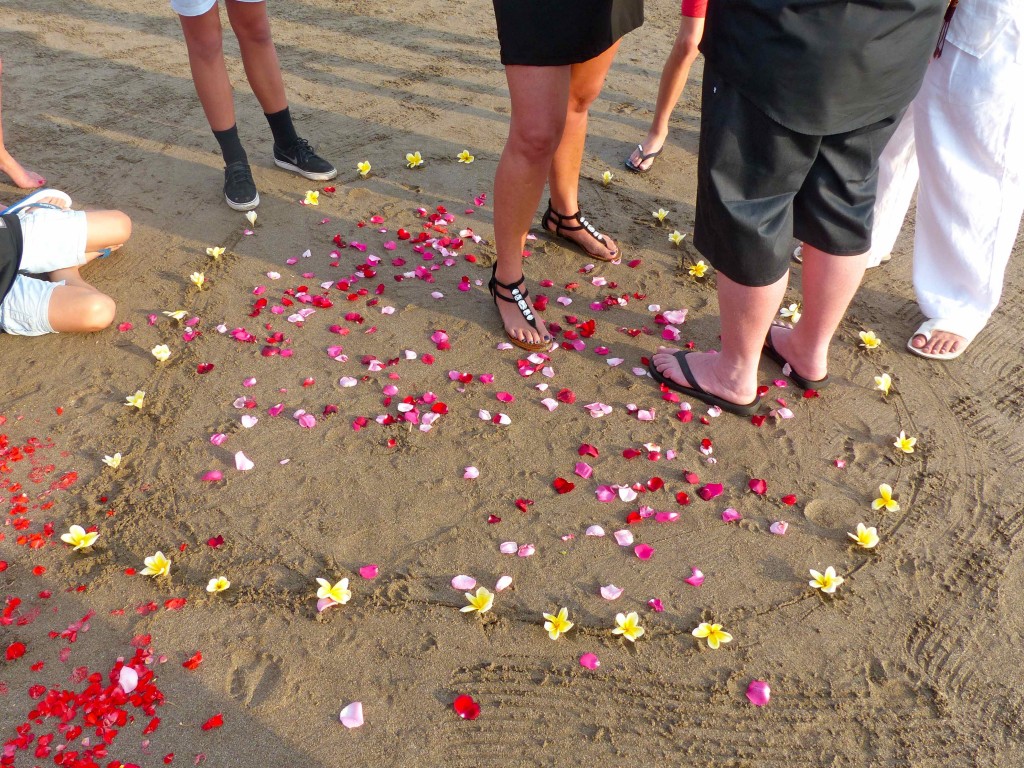 Married in a heart of flowers 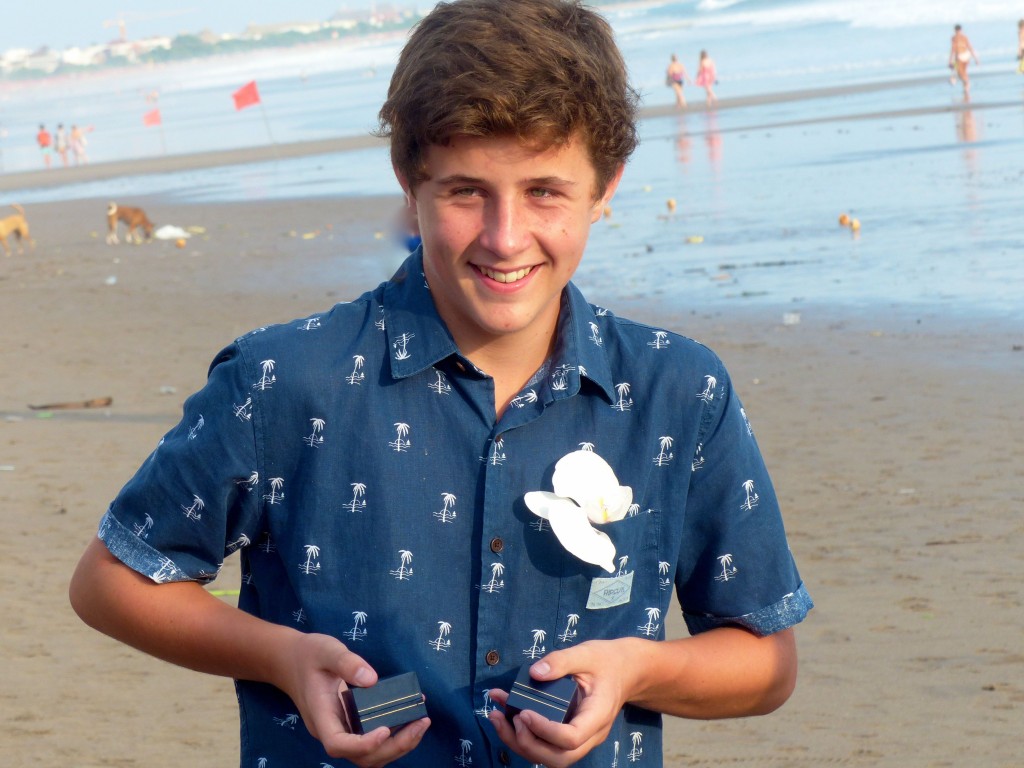 Jill’s son Jesper on stand-by with the rings 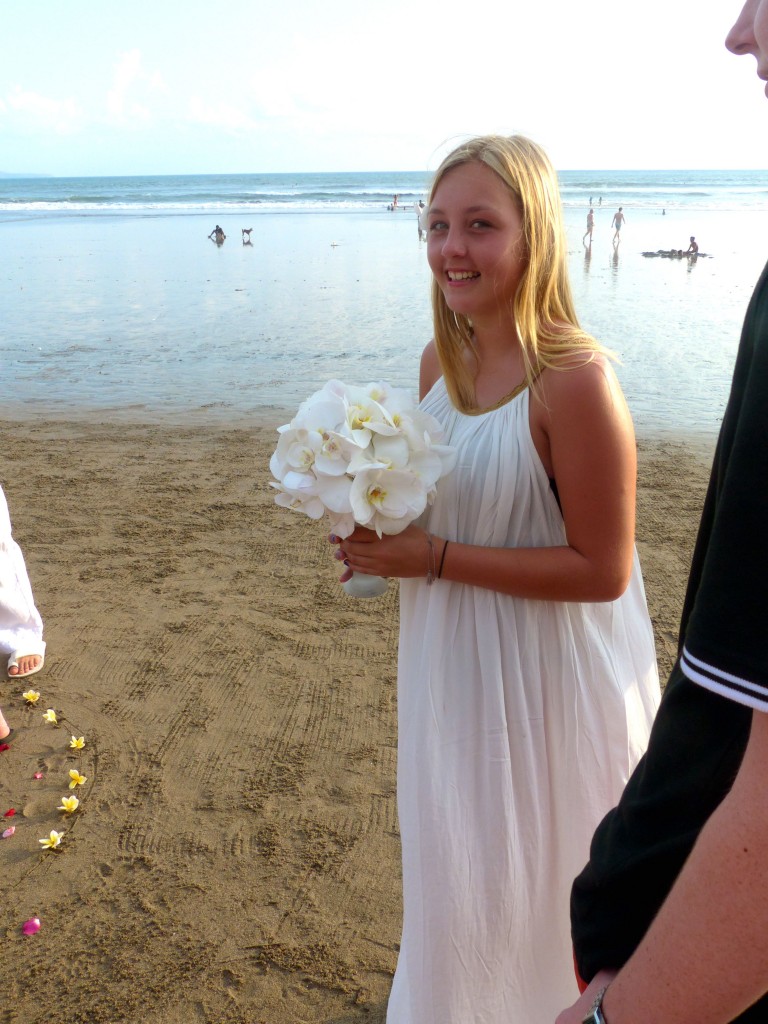 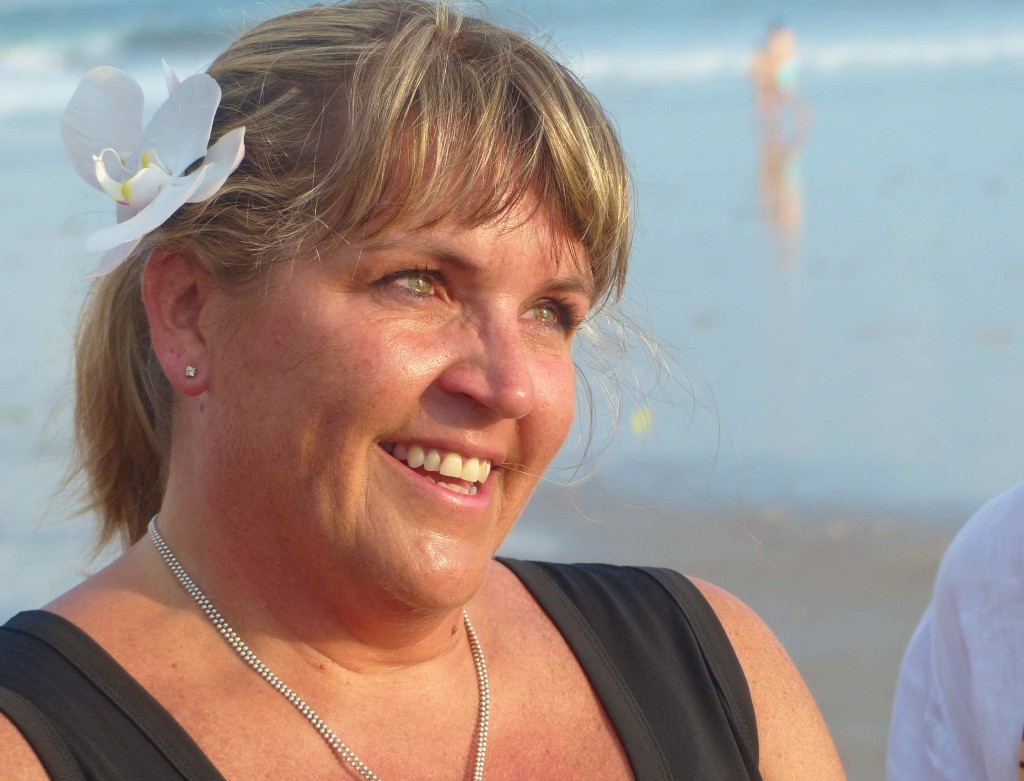 During the vows, tears of joy… 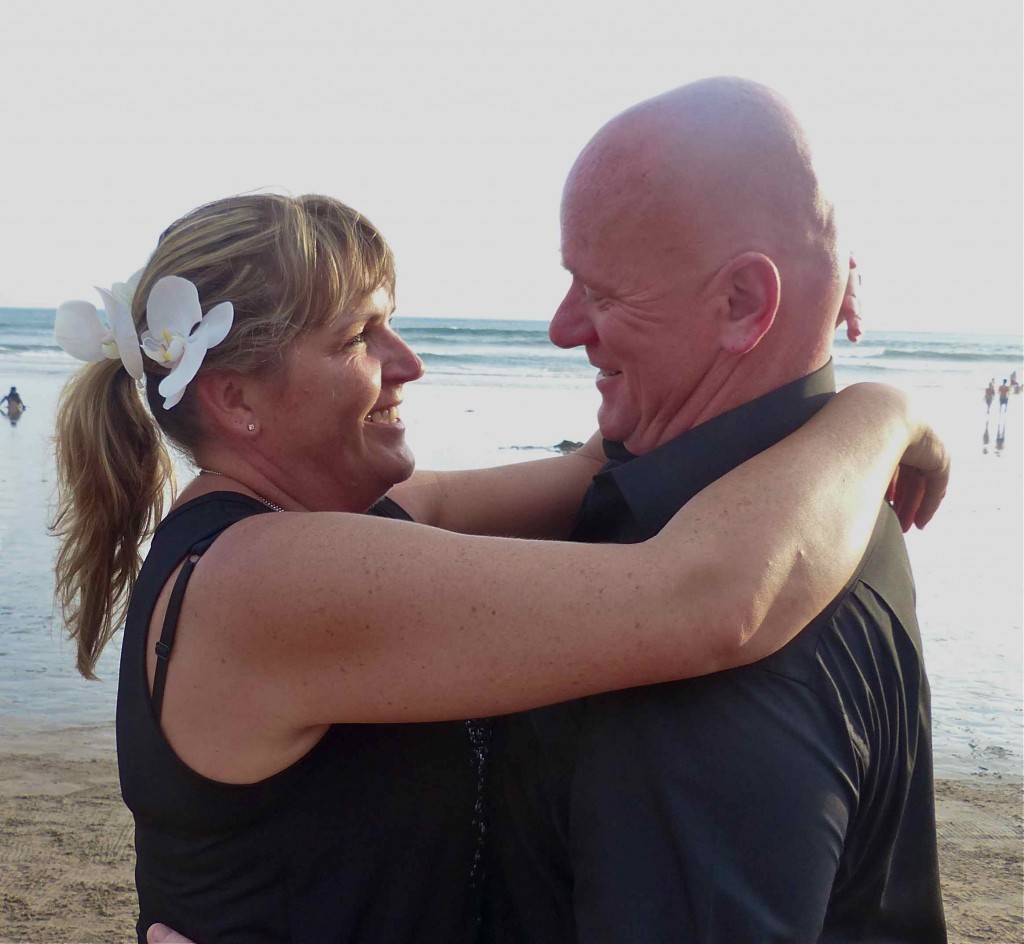 The look of love… 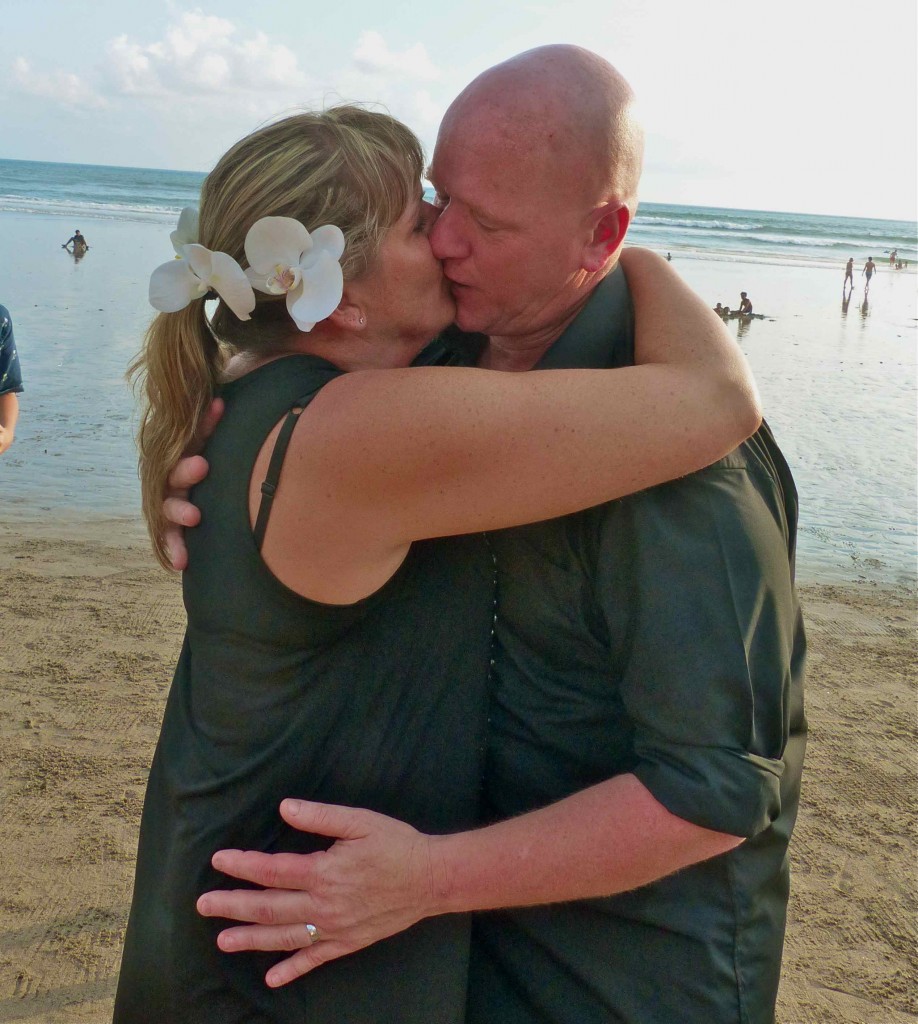 Sealed with a kiss… 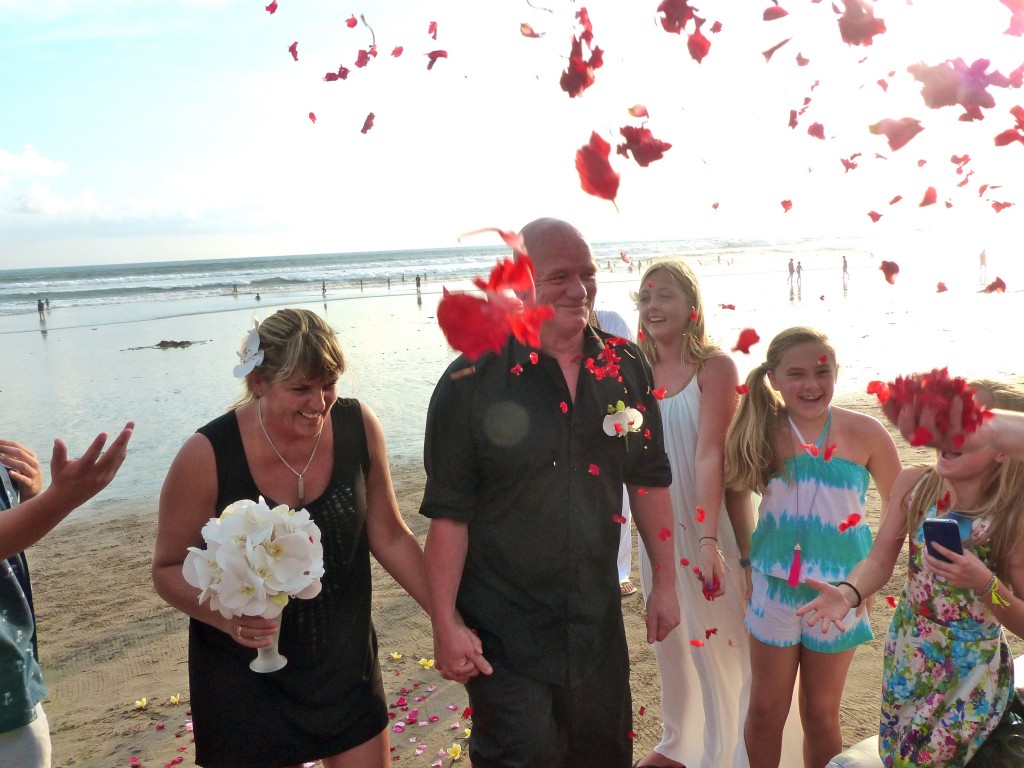 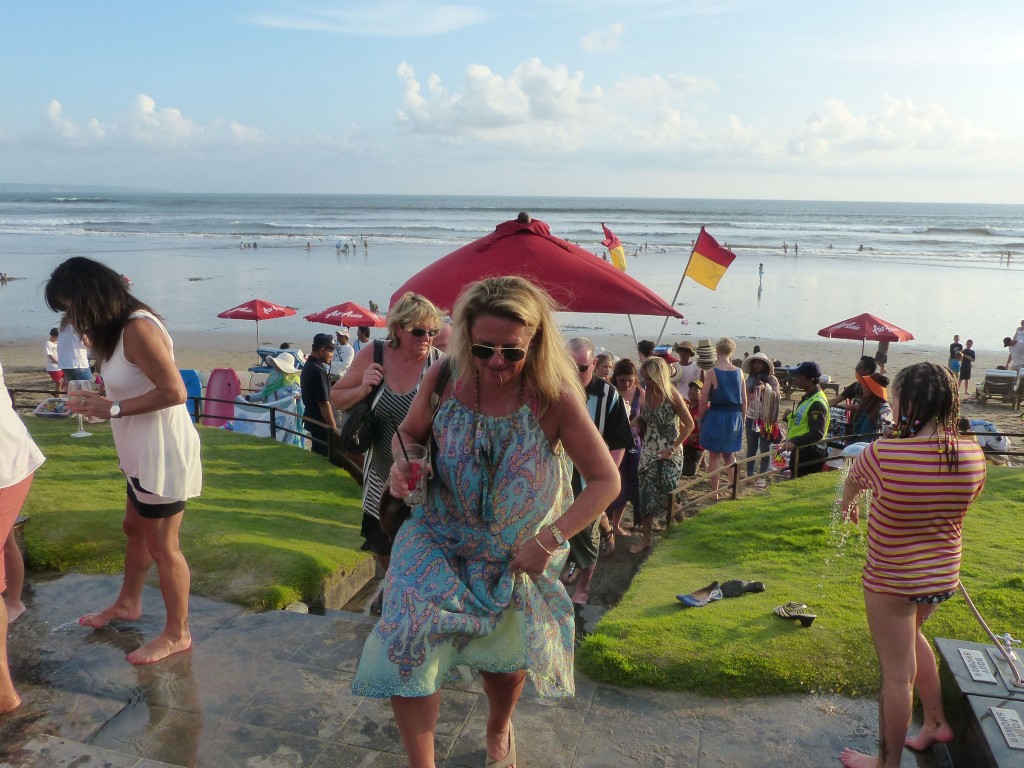 All back to Kudeta to celebrate! 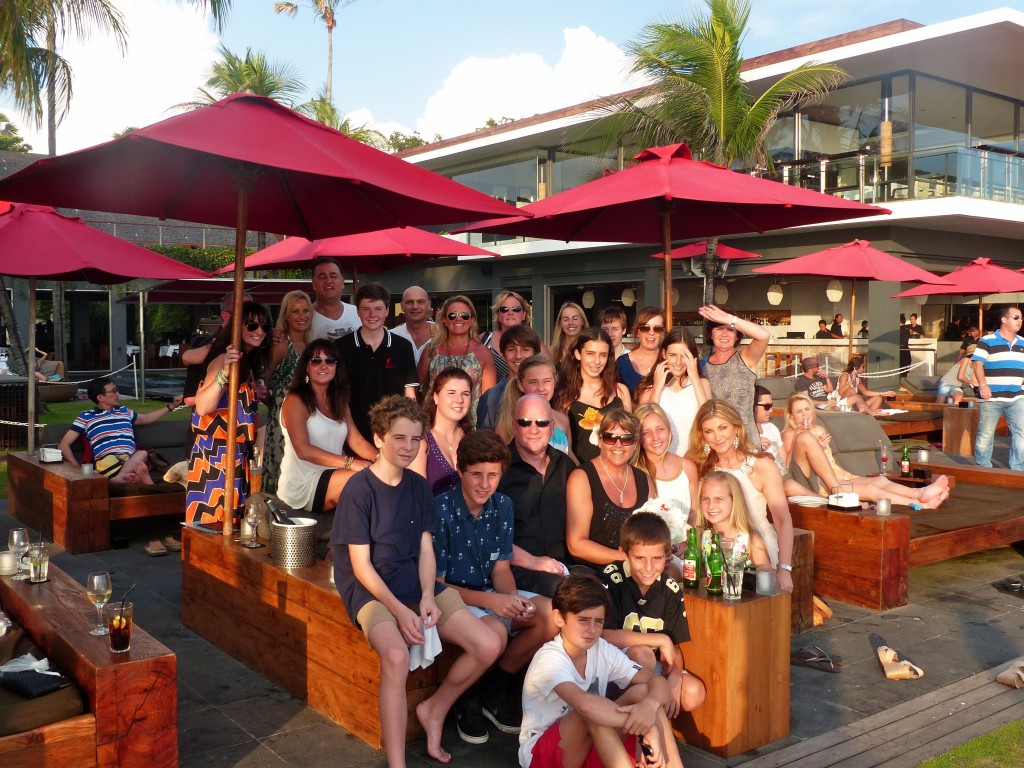 Just after the group photo, Jill announced it was time to throw the bouquet, so the youngest of the wedding party raced onto the beach to battle it out. 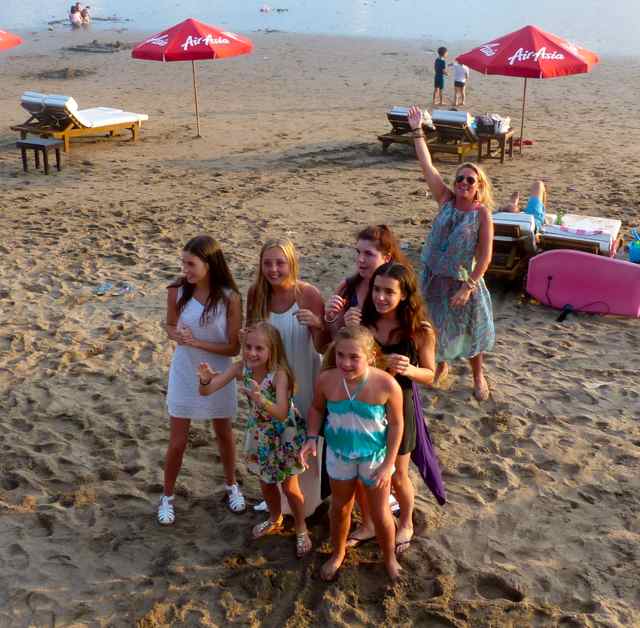 The battle for the bouquet 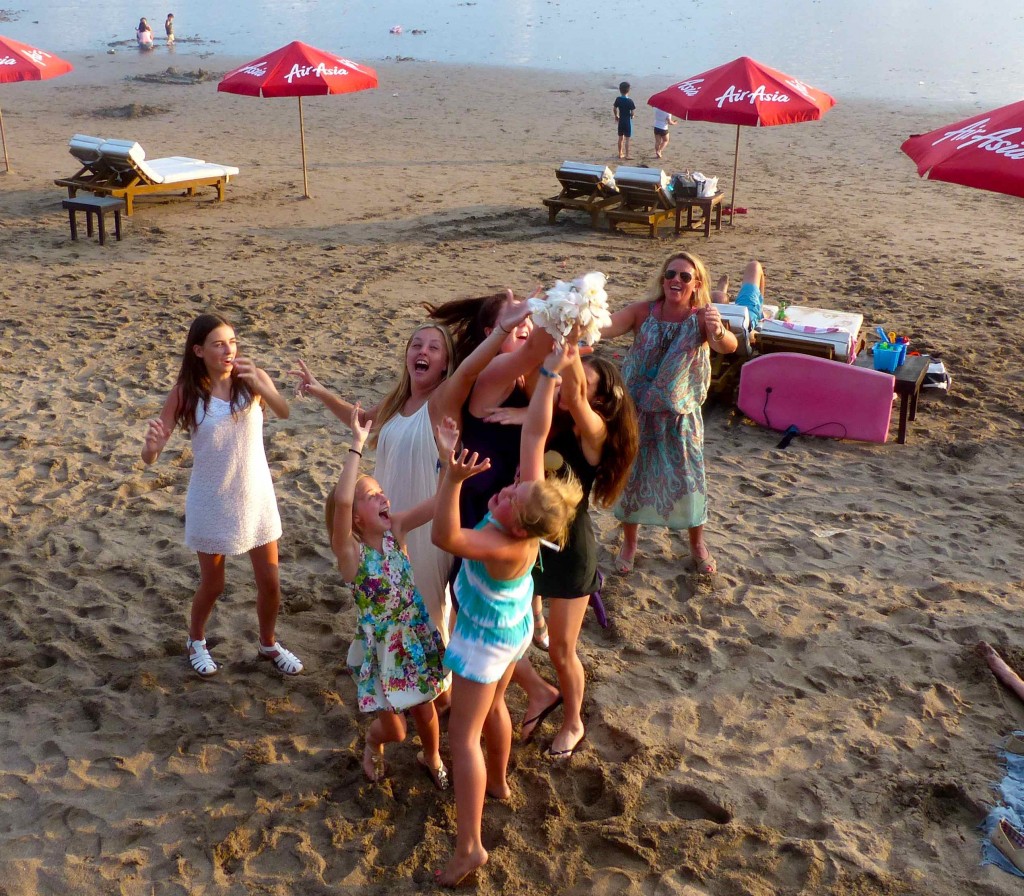 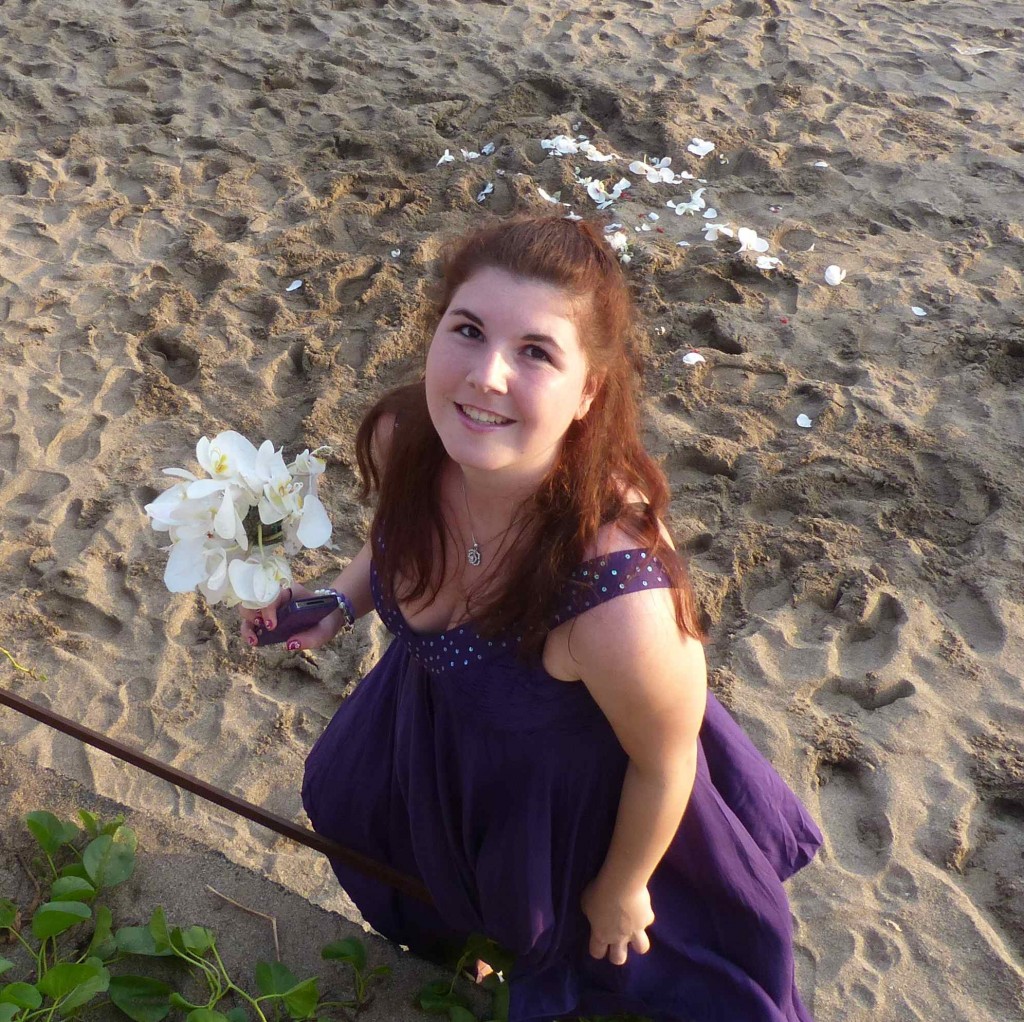 Ronnie with her bouquet

That’s my girl!! Yep, our daughter Ronnie beat the others to the bouquet. Which surely means I can look forward to another Bali wedding?

Then it was time for drinks and dinner. Although sadly I must have put a greasy finger on the camera photo lens at some point, making for slightly blurry pics… oops! 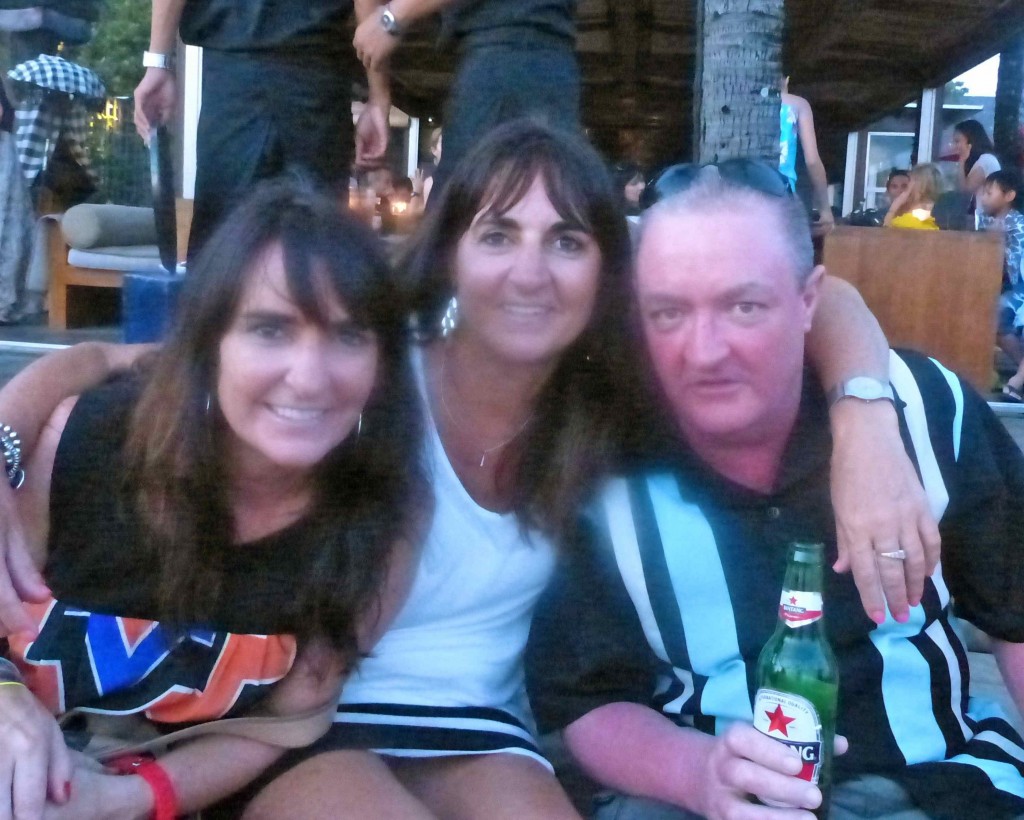 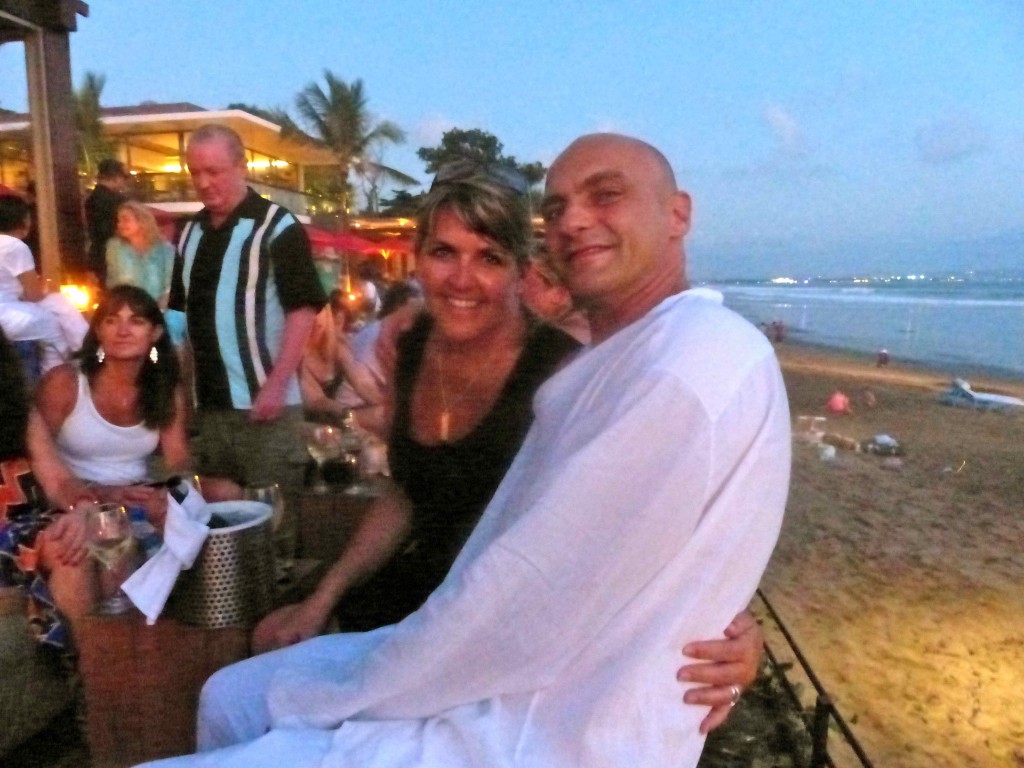 Kim, the celebrant, even hung around for a beer

And let’s not forget it was also Jill’s birthday. So yes, there was cake. 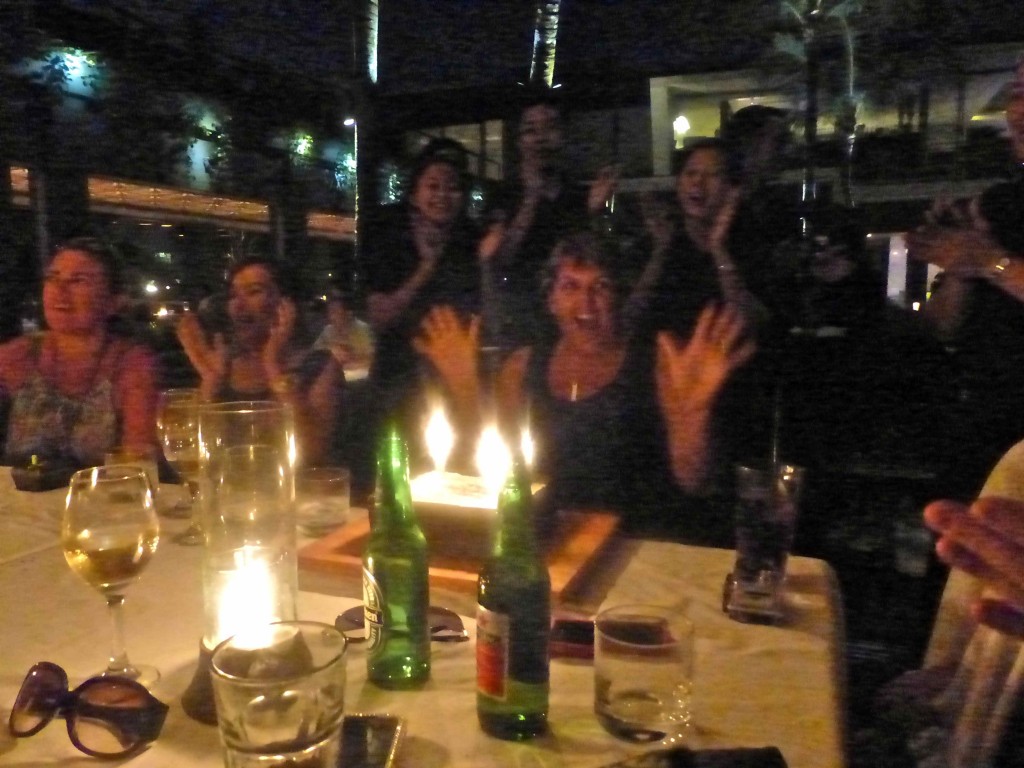 Pete and Jill have been together for nine years, so we’ve waited some time for this wedding. But it was definitely meant to be. From the beginning, their relationship has faced some tough challenges – trials you wouldn’t wish on your worst enemy. That they’ve managed to see these through just made this day an even greater cause for celebration.

Not long after they met at a bayside pub on a Sunday night just before Christmas, Pete headed off to the UK for business for two months. Smitten, he phoned her every morning and every night the entire time he was away. Both agree it was a wonderful way to really get to know each other and cement their connection through conversations that went for hours. Pete racked up a phone bill of more than four thousand dollars.

Then six weeks after Pete returned home, they met with some friends at a local pub. Pete had planned to take Jill on a date that night. As he was riding his motorbike, he told her he would go home and get changed, then return in an hour in his car to pick her up.

Her mobile phone rang. A man said he was calling from the Alfred Hospital and that Pete had had an accident and was asking for her. Initially, Jill thought it was a bad joke by one of Pete’s friends and told the man to get stuffed. Eventually he convinced her it was true and Jill took a taxi to the hospital.

Sadly, it wasn’t a joke. It was deadly serious. Pete had been hit by a four-wheel drive and knocked off his bike at a major intersection. The car had run a red light. Pete had nearly been killed.

Jill took one look at Pete, his body swollen and bloodied face, as he lay on a hospital bed and she fainted on the spot. He’d lost part of his bottom lip, nearly lost an eye, had two broken legs and a broken arm. He’d also suffered a head injury and was transferred to the  Epworth Hospital where he remained for two months. He was then back at the Alfred and in hospital for a whole year, mostly in a wheel chair.

Jill says most of Pete’s friends visited at the beginning but then the visits became fewer and fewer until he pretty much lost most of his friends. But Jilly remained steadfast and never gave up hope that he’d recover and that they would be able to share a life together. And they have.

Pete has never had kids of his own and has also been a wonderful stepfather to Charlie and Jesper.

Jill was thrilled with the wedding day but says if she’d known, she wouldn’t have worn black. And she might have put on a bit of make-up. But overall, the surprise made it such a special and over-whelming day, she wouldn’t have had it any other way.

Congratulations to my beautiful sister Jill and my wonderful new brother-in-law, Pete. 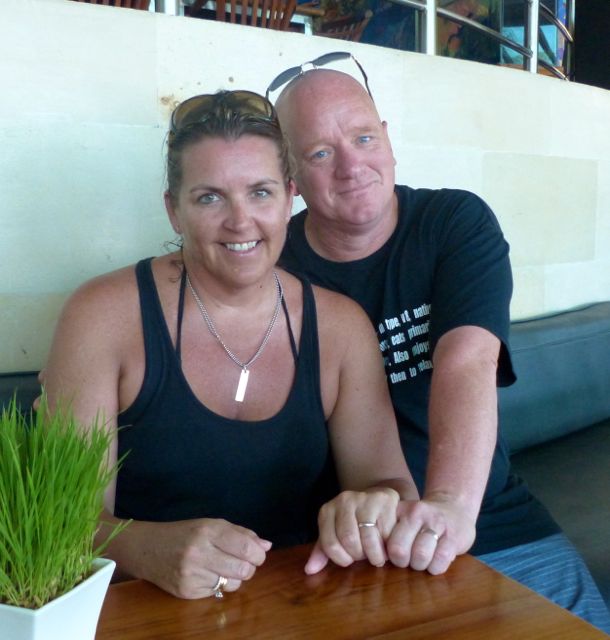 The Newly-weds the next day

(P.S. If you’re thinking of staging a Bali wedding and would like to get in touch with Kim, he has a website at  http://www.baliweddingcelebrant.com)