Ronnie all set for her 18th birthday

Our daughter, Veronica, recently turned 18. (Yes, yes, of course I was a child bride…) And while her birthdays have been cause for much celebration over the years, I wasn’t particularly looking forward to this one.

It’s not that I was worried about Ronnie. As I wrote in a Blog not so long ago, her Saffy-like tendancies mean she doesn’t drink alcohol nor did she plan to on her 18th. But she DID want a party. And these days, an 18th is a seriously tricky event.

Particularly because Corey Worthington wrecked the plans of millions of teenagers when he held that impromptu party at his parent’s home while they were away… You know the rest. About 500 feral youths trashed his home and the neighbourhood.

So forevermore, parents will be haunted by that story, fearing the worst when their own offspring plan an 18th celebration. Like me.

The biggest issue is alcohol. Whoever is celebrating their 18th, will no doubt have many guests who aren’t yet at the legal drinking age. So how can you, as a parent, monitor who is and who is not allowed to drink grog at a party? The laws have changed, so that if you are found to be serving a minor alcohol, (including those with fake ID) you can be fined or/and potentially sued. Even if the party is in your own home…

My biggest tip for parents of younger teenagers, is to start talking about the fact that you WON’T be throwing a party for their 18th NOW. Get in early. It’s just TOO damn hard. Give them money, send them on a holiday, buy them a car – just DON’T hold a party. Here’s why.

For starters, it’s impossible to find a venue. If you don’t want to hold the party in your own home – and who would with the threat of social networking sending a locust swarm of rampaging youths to your house within minutes – then good luck trying to find a place that will. We rang restaurants, function venues, the council and even the local RSL. While our initial enquiries were warmly received, as soon as I mentioned the dreaded birthday age number – EIGHTEEN – the phone line went dead. No one wants to take the risk.

In our case, we got lucky. We booked a local church hall and paid the deposit before one of the senior vestry members rang me, spluttering with concern, that we were staging a… SHOCK, HORROR – 18th!!! Turns out there’d been some miscommunication along the way and the lovely lady who took our booking, had no idea 18th birthdays were considered such a dangerous risk. As we had paid our deposit and sent out invitations, the booking had to be honoured. Lucky us. 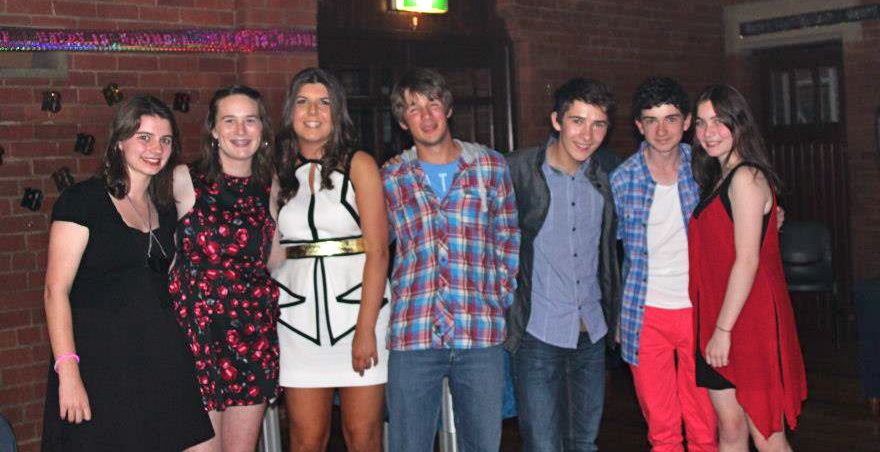 Ronnie with some of her guests arriving at the party

Then there’s a myriad of organisational tasks ahead. Here’s a quick checklist that might help:

1. Notify your local police about the party with the necessary details.

2. If you can afford it, hire a couple of security guards as an extra precaution against gatecrashers. We decided not to take any chances and did.

3. Have a thorough guest list and make sure those invited know they are not allowed to bring along uninvited friends.

4. Make sure there’s plenty of bottled water and soft drink available, as well as alcohol. And food!

5. Rather than alco-pop bottled drinks – favoured by lots of girls – organise a slurpy machine so you can add you own alcohol. It’s cheaper, plus you only need add a very small amount of grog to help prevent anyone over-indulging. (sneaky, huh?)

6.  Organise wristbands for those that CAN drink alcohol to help bar staff or friends serving beverages, to keep it legal.

7. Call on family and friends to help on the night. The more back up you have, the better. 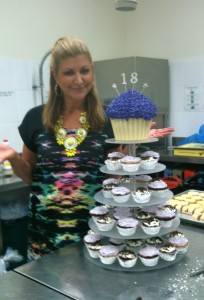 Relegated to the kitchen

8. Save money on a tiered birthday-cake display. Popular cupcake stores often hire out cake stands for $30 a pop. Buy your own on-line for between $30 and $50 and you’ll have one for keeps. I bought the Giant Cupcake on the top but then saved money by making the actual cupcakes. Okay, I ‘fess up – I used packet mix from the supermarket – but still a helluva lot cheaper than the cake shop versions. The pale lilac icing was challenging… Try mixing blue and red food colouring, but go easy on the blue. 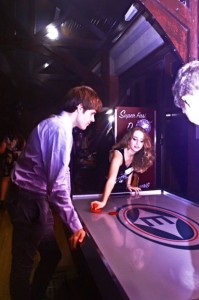 9. Organise as many games and activities as possible to distract the party crowd from grog being the focus. Fletch was a star and sorted Table Hockey and Foosball machines that were really popular – especially earlier on before the mob worked up the courage to hit the dance floor. 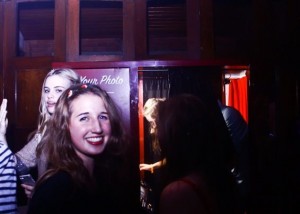 The photo booth was a winner!

10. Hire a Photo Booth. This was the BIGGEST hit on the night. Again, this genius idea came from Fletch, who sourced ours from the Australian Photo Booth Company. They also provide an assistant to help, plus a range of goofy hats, glasses and fancy dress paraphernalia to give endless hours of dress-up entertainment. 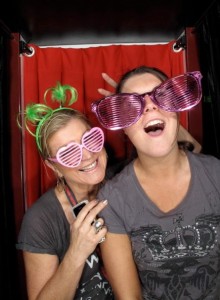 Doubles are made of all the photos, so that copies can be put into an album for the birthday person at the end of the night – a fantastic momento from the evening. Even better, it arrived earlier in the day, giving our family loads of laughs taking practice shots before the party. I even managed to get in a bunny-ears shot with Ronnie. Which is just as well, because I wasn’t allowed in the main party room on the night unless I was bearing food… (Mothers are SO embarrassing.) 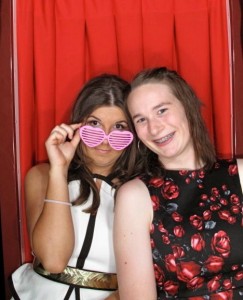 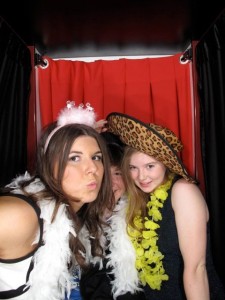 11. Book a GOOD DJ. I had no idea about DJs, but after talking to my niece Charlie, who knows far more about teen parties than me, I learnt there are plenty of local types who don’t cost a bomb but do a great job. So I took her advice, (about who was the most popular on the scene in our area) and it worked a treat. Again, more dancing means less drinking. 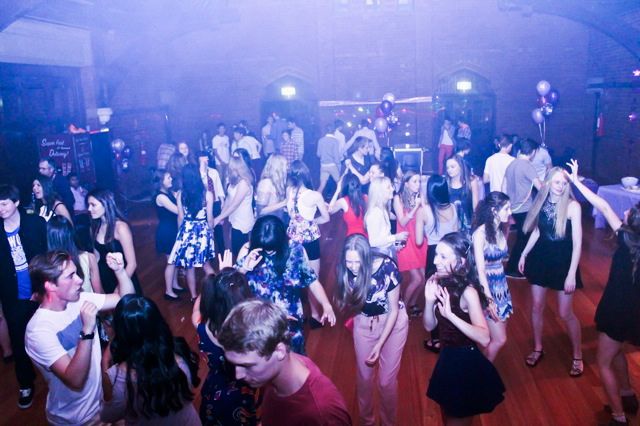 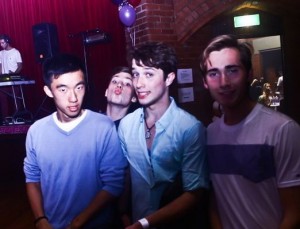 Not a Corey in sight…

12. Worry less. You’d be surprised how well behaved our teenagers are. It’s quite shocking, really. No one vomited, no one threw any punches and I didn’t even see ONE messy drunk. Although that could be because I wasn’t allowed in the room much… 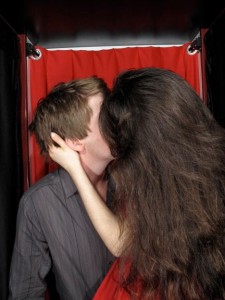 In fact, the most risqué behaviour I came across was when I flicked through the photo booth shots the next day. There WAS a little bit of random booth snogging… (Thank God – they ARE normal.)

And even though I DID worry too much, and Fletch and I worked our butts off cleaning up that messy hall with the help of my Mum and step-father, Ken, till TWO THIRTY in the morning, there was THAT smile on the face of our gorgeous daughter all night that made it completely worthwhile. In a word – incandescent. 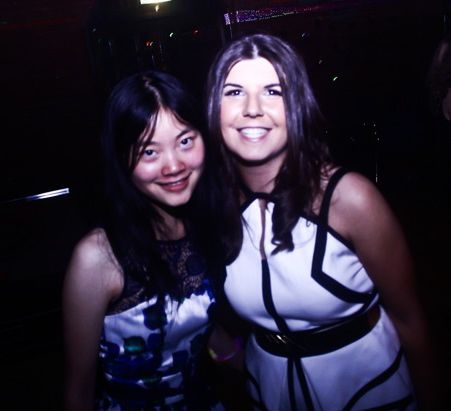 The smile that made it all worthwhile – Ronnie with her pal, Sunjuri