I’m all for a woman carrying the Aussie flag at the Olympics opening ceremony. After four blokes being granted the honour in a row, it’s definitely time. So I don’t mind that beach volleyball champ Natalie Cook has kicked up a stink about the whole palaver. Some now say her comments were in jest, but that hasn’t stopped plenty of commentators giving her a serve for daring to raise the issue. 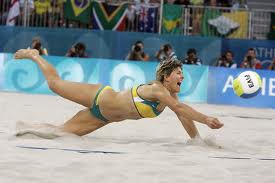 While I agree that the privilege  should be given to the most deserving athlete regardless of sex, I still believe that puts Natalie in the running. And I think it’s important the role has become a matter of public debate. Because women in sport have been given the short end of the stick for too long. Not just at the Olympics, but in terms of publicity, media coverage, sponsorship and accolades in general for decades.

Just look at what happened to Australia’s women basketballers, flying to London?They were shoved in economy while their male counterparts were lying back, lapping up the luxury of business class. Who made that decision and why? It surely couldn’t be based on a matter of size. Star player Elizabeth Cambage is 203cm tall so that’s clearly not an issue.

When I worked in television news, there were frequently arguments about the lack of female sporting competition in the nightly sports bulletin. Often viewers would ring and complain that a major netball match had been won by the Aussie team, but not a mention was made on the news. Producers would say that the public wasn’t interested – that not enough people attended the matches – and if they weren’t popular, we couldn’t justify airing results or highlights from these games.

As far as I could see, it was a classic chicken and egg situation. How are you going to get people interested in the first place if you don’t show them what they’re missing out on? And if we don’t make a bit of a fuss about our best female athletes, then how are we going to encourage young women to achieve in sport?

While overseas, I was particularly impressed with a TV ad campaign that’s currently screening in the U.S. encouraging young women to stick with their sporting interests at school and beyond. At age 14, girls drop out of sports at TWICE the rate boys do. ‘Keep Her In The Game’ spells out the over-whelming impact our magazine and image-obsessed culture has on young women – driving them to care more about make-up and high heels than enjoying the freedom of kicking a ball in a field with friends. The ad shows the girls turning their backs on a sports field and being transformed as they walk, from fresh-faced fun-lovers to over-painted, posturing pseudo-models.

The ad is produced by the Women’s Sports Foundation – originally founded by Billie Jean King. And it’s got people talking. I’m not saying teenagers shouldn’t like make-up and heels. It’s just that we need a balance. And if women played sport for longer, they’d likely improve not only their long-term fitness, more importantly, their self-esteem.

The media often vilifies magazines for causing eating disorders – using  models that are too skinny and too much air-brushing – perpetuating unattainable images. Instead of talking about what we SHOULDN”T be doing, how about focusing on something else completely – successful women in sport – to give girls something else to think about and aspire to?

Maybe Minister for Sport Kate Lundy could start up a similar ad campaign to ‘Keep Her In The Game’? Come on Kate, jump on board! Even if we don’t have a woman carrying the Aussie flag at the Olympics this year, let’s do something for women in sport for the long-haul. But I’m still hoping Natalie does win the honour and I’ll be cheering like crazy if she leads out our team in front of the rest of the world.

4 thoughts on “SHOULD NATALIE COOK CARRY THE FLAG?”