It’s all pretty trivial stuff. The bigger things – like volunteering for a charity, spending more time with my kids and personal emotional and career challenges – are important for me, but probably won’t  make for entertaining reading, so let’s deal with my Top Five first. And in truth, cutting sugar out of my diet isn’t so trivial, because good health is everything.

Here’s a bit more about WHY I’ve nominated these five challenges:

(1) After interviewing Emma Dumas (see Blog – Dec 19th) about the massive health problems that stem from high sugar consumption, and the enormous amount of sugar in so many processed foods, I was inspired to make some changes to my own diet. Yes, I’m going to try cutting sugar out of my life. Being an addicted sweet-tooth, it’s a frightening thought. 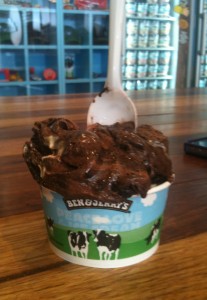 Veronica however, was thrilled with my decision because of my need to say ‘good-bye’ to sugar properly. This meant a dedicated trip to Ben and Jerry’s Ice-cream parlour in Prahran, where I gorged on the new Maple Tree Hugger combined with Chocolate Therapy and she was in ice-cream heaven with the Vanilla Cookie Dough flavour.  Seriously bad and seriously amazing. Just looking at this picture has me sighing with longing…

I’ll let you know the ground rules. As Emma advised, I’m aiming to stick to the ONE LINE RULE. This means eliminating any processed foods that have more than 5% sugar per 100g on the nutrition label.

Emma’s willpower is phenomenal in that she hasn’t had a lolly for more than seven years. I’m sure I won’t last that long and while I admire Emma’s strict adherence to the no-sugar diet, I don’t think I can set the bar quite so high myself. I’ll allow myself one piece of fruit a day and I’ll also allow myself wine (2 glasses) a maximum of four times a week. 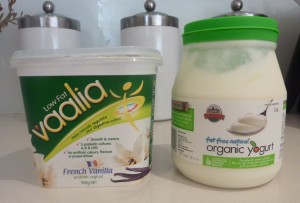 Plus I love yoghurt with my cereal and the lowest sugar-content of any yoghurt I can find is in the Gippsland fat-free Organic yoghurt and that’s SIX per cent. So I’ll be breaking the ONE LINE RULE by one per cent, but I can live with that. It means I’ll be giving up what WAS my favourite yogurt – Vaalia Vanilla – because sadly, that contains 16.3 per cent sugar.

It’s amazing when you go through your own pantry checking labels, that you discover how many products contain such large amounts of sugar! This will be a toughie, but I’ll update you with tips about what works and what doesn’t.

(2) The second resolution is to stop playing I-phone games. I nearly didn’t include this publicly, as it’s an embarrassing admission. But yes, I started playing certain games because of the kids. You know the conversation.. ‘Mum, you’ve GOT to play Dragonvale because I NEED you to send me more gems!!’ ‘Sure, honey, I’ll do that’ And before I knew it, I was actually caring about when my dragons were hatching. Yep, I told you it was embarrassing.

Then there were the endless games of ‘Words With Friends’ which I justified to myself because I was dealing with ‘WORDS’ and it was stimulating my brain – wasn’t it?

But no, all the amount of hours I have wasted playing these games can’t be retrieved and could have been spent doing many more valuable things. Like tidying my office…

(3) Tidy my Office before the end of March. This is because I am sick of working under the ever-increasing mounds of paper on my desk. Enough already!! This mission can be accomplished! It’s not a massively high priority though, so I’ve given myself till the end of March. There are LOTS of piles of paperwork to be filed…. ho hum…. dreary stuff.

(4) To go to the gym at least THREE times a week. After working hard to eliminate my muffin-top last year, I need to work harder at the gym to make sure I don’t grow massive bulges in other places. Spin classes are my preference, so I’ll let you know how this goes.

(5) And lastly, to NEVER have another cigarette. As I said in the blog about giving up smoking, I only broke a couple of times during last year, but this year, I don’t even want there to be ONE of those moments. Again I’ll keep you updated.

Let me know what resolutions you’ve made and how long you think you’ll keep yours!

2 thoughts on “My New Year’s Resolutions”