Who would have thought? A rare two-metre-high bird, found preening in the Yarra Valley… Not only epically towering above its species, but apparently indestructible. 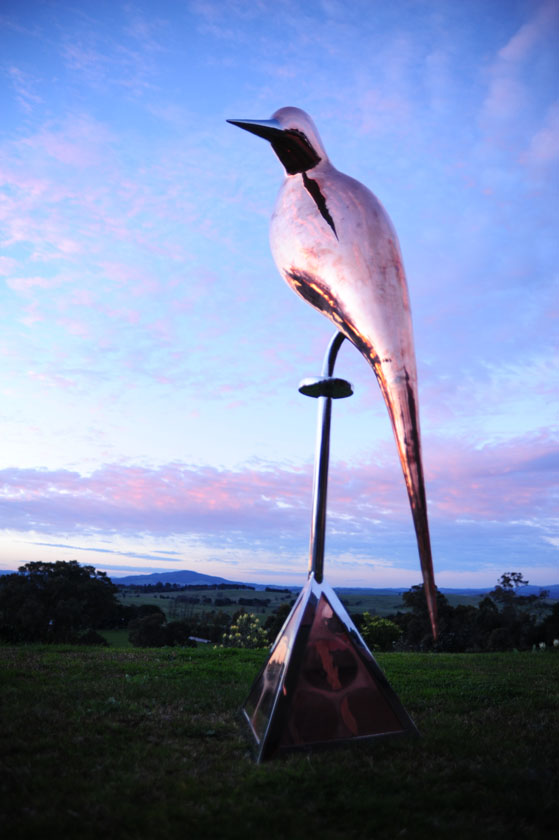 This sleek stunner is the baby of internationally renowned Melbourne-based Master Potter Ted Secombe. It’s one of seventeen major pieces, made of bronze and steel, in what will be his first exhibition since 2004.

Not only is it eight years since his last public show, this exhibition represents a completely new direction for the artist. Ted says he’s now looking forward to showing the world what he’s been up to.This sleek stunner is the baby of internationally renowned Melbourne-based Master Potter Ted Secombe. It’s one of seventeen major pieces, made of bronze and steel, in what will be his first exhibition since 2004. 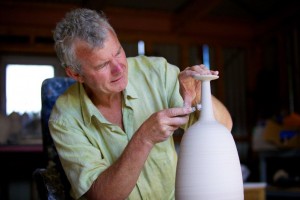 ‘I’ve gone off on a new tangent because after thirty years of working in the ceramic and clay area, even though I was very successful with it, it left me asking questions about where do I go now? So I put it away for a few years and built this really funky house out in the Yarra Valley. I spent a long time re-thinking things. Which was not a very easy process. It was like being in a wilderness for lack of a better word. It’s a strange place to be in, an uncomfortable place.’

It wasn’t until Ted came up with the concept of using clay as a means of facilitating another artistic process that he began feeling inspired again. He began using clay to make models for new sculptures in steel and bronze.

‘And because I have a real understanding of how to do this now, I can do really interesting forms. It’s so fluid, to be able to create these beautiful lines which aren’t available in other mediums,’ he says.

Ted has been a full-time artist for thirty-five years. It wasn’t a planned career. When he left school, he completed a science degree and worked as a bio-chemist in pathology. 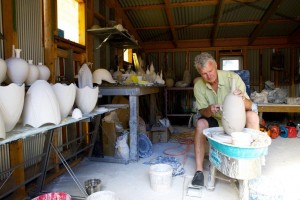 Ted working in his studio

‘I went travelling and never went back to it. When I came home, I spent time with friends who were studying arts degrees or acting. Some were painters and potters. I thought, why not have a play with this and see what comes of it? There were quite a few lean years , but luckily I eventually became quite good at it.’ 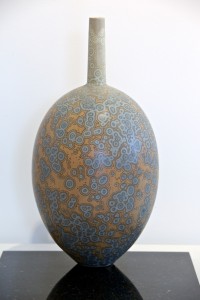 Ted never underwent formal training an art school, but ended up becoming more successful than most of his contemporaries. In particular, he created a name for himself with awe-inspiring ceramics – bowls, urns, water stones, lanterns and fountains which have been praised by art experts throughout the world. Complex glazes and finishes are his specialty.  His works are featured in major hotels around the world – the Shangra-La Hotel in china, Ethiad Airlines Towers in Abu Dhabi, the Ritz Carlton in Singapore and even at Melbourne’s Crown Towers. 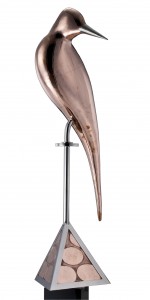 It seems like a huge artistic leap – from delicate, finely crafted pots, to towering steel structures. Ted explains what drew him to steel and bronze.

‘I think it was the more robust nature of it. I mean, ceramics are permanent provided they aren’t knocked about, but steel fights back.With clay, you are limited in scale and in contour and shape. This is an avenue for taking the work to other places – and maybe branching out to the public art pace area as well. I think there’s a need for that right now.’

He’s right. I can just picture these steel pieces being snapped up by the corporations for display in front of their city buildings.Ted says he also creates pieces on commission and could build birds up to about ten metres high.

It’s a long-winded process. First, Ted creates the piece in miniature. Then he travels to China to build the full-size version of the bird in clay. Why China?

‘Because it’s the only place I can find skilled fabricators to produce the work I need to produce. There’s no artisanes here. And if you could, the price is too inhibitive. What would cost about fifty thousand here only costs about twelve thousand over there. And that’s using top-grade steel. Plus everything has to be hand-beaten with hammers and anvils. It’s very time-consuming.’ 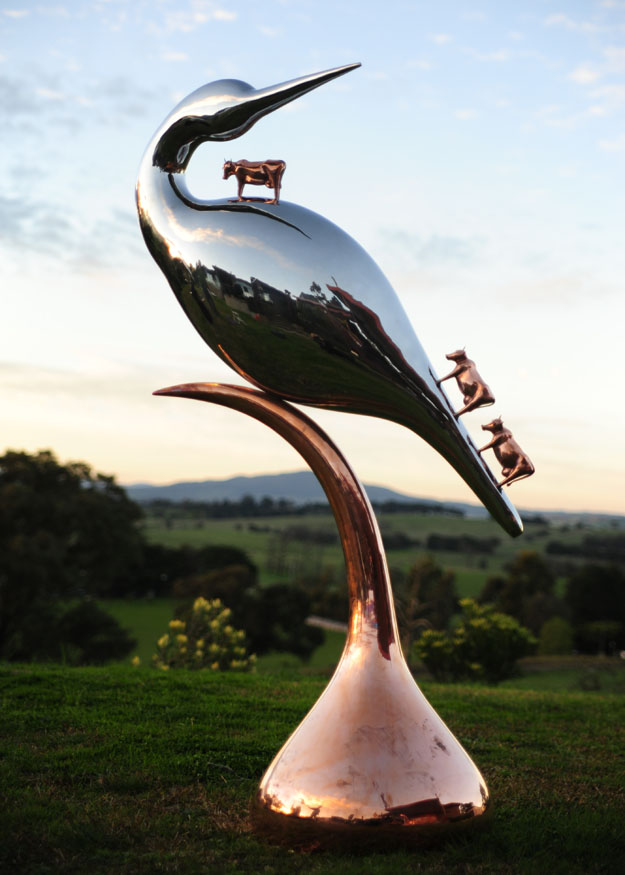 The birds aren’t based on an actual species. ‘Mostly they’re a figment of my imagination,’ says Ted. ‘Some have botanical references, but mostly they’re just forms that come out of my hands when I’m modelling the clay.’

But there are still smaller ceramics and pots in his next exhibition. ‘These are really organic forms – influenced by pods and things from nature. So I’ve done a series of those which are like still life installations.’ 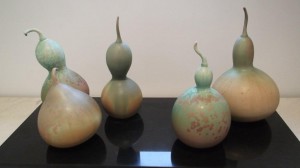 Ted says his inspiration comes from nature. ‘I live in amongst lots of natural, beautiful things and I’ve always been passionate about wildlife, gardens and flowers. The natural world is such a nurturing place.’

The exhibition has been about two years in the making. All up, it includes about fifty pieces – seventeen being major sculptures in steel and bronze. The major pieces range in price from $7000 – $20,000, while the ceramics are priced up to $2000.

And the setting is idyllic – at Ted’s house in the Yarra Valley. It opens on Saturday, September 1st and will run for three consecutive weekends. (inclusive) Visitors are welcome – even if you don’t think the artwork is within your budget. 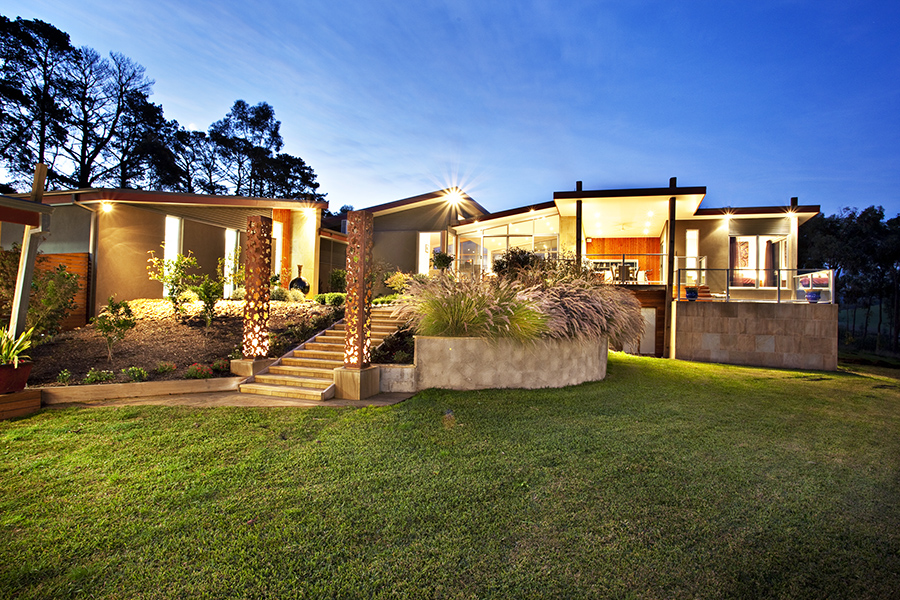 The Ted Secombe Studio and Gallery is at 240 Bleases Lane, Dixons Creek, Victoria.