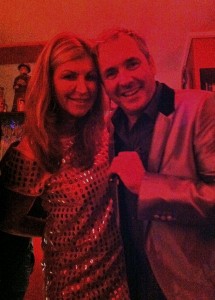 Awash with the Christmas spirit

While I do take my journalistic profession quite seriously, I have to admit it to having a bout of the giggles while interviewing my own husband. I mean, it does feel a bit ridiculous, after all, when you’ve been married for more than twenty years – to put a taping device between the two of you to start a process of ‘formal’ questioning…

Fletch wasn’t enamoured with the idea either. He even tried fobbing me off with a press release instead! Are you kidding? His own wife? There isn’t a self-respecting journalist on the planet that would do a story on the back of a mere media release. Well, except for the super-lazy and disinterested. I’ve got plenty of faults, but I’m not those.

This was an interview that HAD to be done properly. It’s all about Fletch’s new Christmas song – If You Want A Happy Christmas – out today on ITunes for a teensy-weensy $1.69.  https://itun.es/i6Fb88M  #iTunes 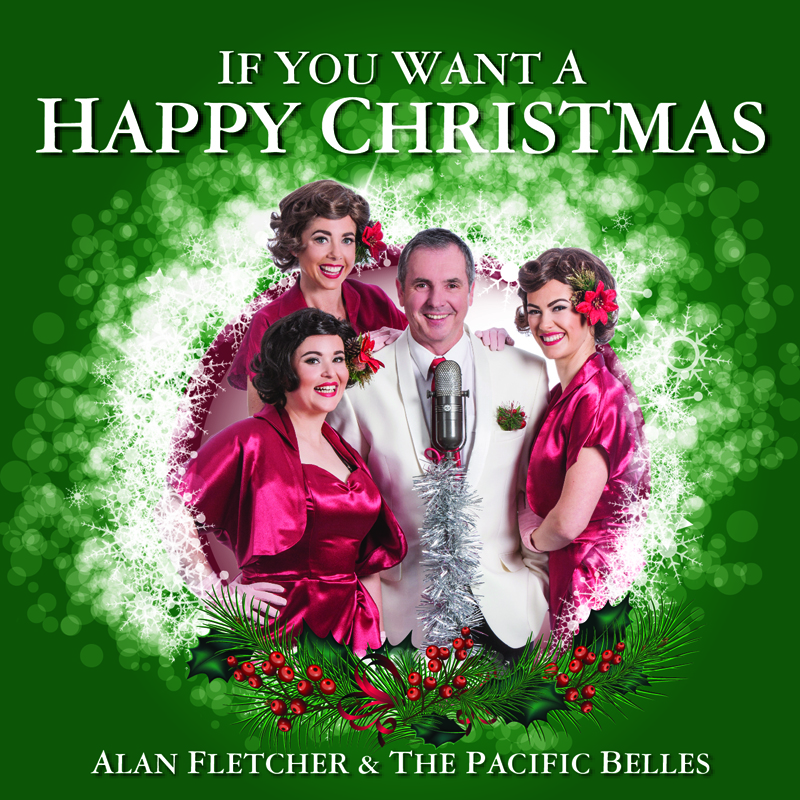 It’s an upbeat, catchy tune that will put you in the festive spirit, plus all the profits from the song will go to a wonderful charity, Blue September, to aid cancer research.

Fletch recorded the song with harmony singing sensations, The Pacific Belles, who also feature prominently in the video which can be seen on You Tube. The clip has already had more than 9,000 views. Check it out at http://www.youtube.com/watch?v=AMeRu-0q8E8

He even called on help from his ‘neighbours’ to take part in the video – with actors and great friends Stefan Dennis, Chris Milligan and James Mason joining in the shenanigans, playing the roles of a rather funky Santa and a couple of cheeky elves.

But enough from me. Let’s get straight into that interview. And just for the record, I call him ‘ALAN’, not Fletch in this interview, because I am, after all, a complete professional.

JEN: So tell how you came up with the lyrics for your new song?
ALAN: I’m happy to, but I’m only going to give you one shot at this because I know you’re very, very unreliable with recording interviews. So have you got a back up plan here?

(Okay, so maybe there have been technical glitches with a couple – just a couple – of interviews I’ve recorded on my IPhone that have had to be re-recorded…)

JEN: (laughter) Ah, only my fantastic memory.
ALAN: Okay then, we’ll see how you go.

JEN: So, the lyrics?
ALAN: The lyrics? Oh yes, right. Well, I personally am not a huge fan of the commercialisation of Christmas and so when I came to write a Christmas song, I wanted to do something that was fun but I wanted it to have a little bit of a message as well, and to shift the focus away from present-giving and back on to connecting with the ones you love.

JEN: Is this just a really elaborate way of you saying you’re NOT going to be buying me a present this year?
ALAN: Yes. Yes, you’re getting nothin’ but a big, big smooch right under the mistletoe.

JEN: But what about the diamond hoop ear-rings I really want? (much laughter as of course, I would never expect something so expensive from my very un-materialistic husband)
ALAN: Well, there’s plenty of rich bastards out there who will buy their wives diamond hoop ear-rings but that won’t get them anything. And you’re not going to get any.

JEN: Why were you reluctant to be interviewed by me?
ALAN: Because you’re too invasive as an interviewer and you have a reputation for running with sleaze.

JEN: Rubbish! Give me an example.
ALAN: Your cosmetic blogs. They’re full of sleaze.
(I have no idea what he is talking about…)

JEN: Well, what about your song with the line in it about kissing under the mistletoe with a MERRY HO? What does that mean? You want to pash a drunken whore under a green leaf?
ALAN: Would you stop wasting my time?

JEN: No, this is my interview and I’m running it so just answer the question. Do you really think it’s appropriate we should be singing about drunken whores to our children at Christmas time?
ALAN: Well, it’s better to sleep with a drunken whore than a sober one.
JEN: Why?
ALAN: Because they won’t remember you the next day.

JEN: Time to move on. So what measure of success do you need from this song to make all the hard work worthwhile?
ALAN: I’d like it to have widespread distribution and recognition over the years – not just this year – and that I don’t make a loss.

JEN: So you want it to be played in shopping centres, at carols nights etc..?
FLETCH: I would like it to be played wherever people feel festive. I think it’s a festive song with a really good hook and I think people will enjoy it. 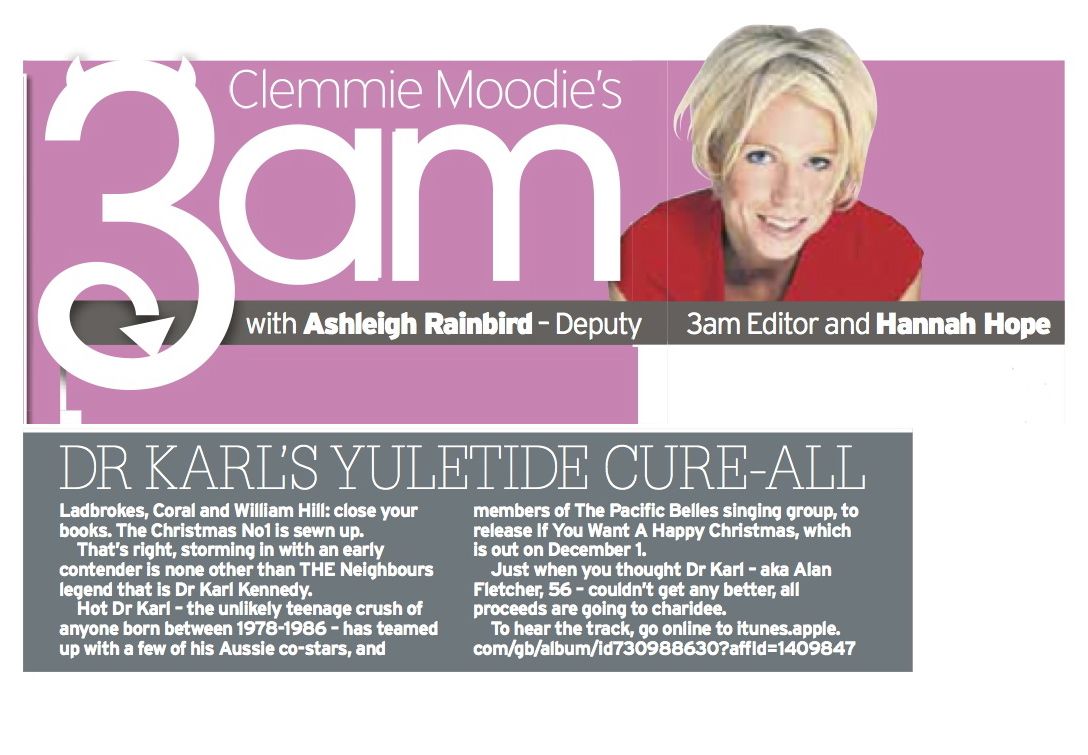 JEN: It’s already being touted by the Daily Mirror as a potential Number One hit. That’s a good start, isn’t it?
ALAN: That was very kind of them and if reaches Number One on the charts, I will be sending them a massive crate of French champagne.

JEN: Will I get any French Champagne?
ALAN: You never said it was going to a Number One Hit. You told me it sounded like a Wiggles song.

JEN: The Wiggles are very successful. Do you think it would sell better if you’d made a whole album of Christmas songs?
ALAN: And where the hell would I have found the time and money to do that?

JEN: Good point. It’s a very catchy song. Do you find it stays in your head?
ALAN: I can’t stop singing it. I wake up singing it, I go to sleep singing it… 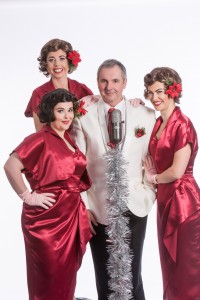 Alan and The Pacific Belles

JEN: Does it haunt you?
ALAN: It haunts me.

JEN: Do you hate it now?
ALAN: I don’t hate it, but it haunts me. And everybody I have played it to has had the same reaction.

JEN: That’s called an earworm. Do you know that term?
ALAN: I think you mean brain worm.

JEN: I suppose you have to put the challenge out to everyone.Can you listen to this song twice without it being stuck in your head?
ALAN: So that’s going to be the focus of you blog?

JEN: No, it’s going to be ‘Is he Mr Scrooge or Mr Christmas?’
ALAN: (laughter, rolls on the couch and falls off)

That’s the end of our interview. I quite enjoyed it. I should also mention that If You Want A Happy Christmas was performed by Steve Purcell’s Pearly Shells, written by Alan Fletcher/Tim Smith, produced & mixed by Robin Gray, and recorded at Allan Eaton Studios in Melbourne, Victoria.

So why not buy it today, help Fletch reach Number One on the charts and help a great cause at the same time? Oh, and let me know if you DO think this song really is an ear worm!