Sometimes I wonder why I do it to myself. WHY? Why would I tell you I’m going to post weekly New Year’s Resolution updates? How stupid. Does anyone actually stick to their resolutions? I must say, with a couple of those declarations, I DID add the disclaimer – NOT during holidays, so I can let myself off the hook until this week, but seriously, I am NOT doing well so far.

I also have mixed feelings about a very positive step I took today. I’ve signed up with a new personal trainer – Ross. He’s a lovely man – very encouraging and patient. I know he’s patient because I promised to email him last SEPTEMBER with my health background, with the view of starting way back then… But I’m lazy. And life happens. Work commitments and travel got in the way, and then I injured a glute muscle trying to climb over rocks in the Grampians, so I kept putting it off – until today.

So I AM proud of myself that I had a meeting with Ross this morning and am booked to begin on Friday. All good. What’s NOT so good is Ross’ take on my resolutions. He clearly thinks I’m appalling when it comes to alcohol consumption. He’s happy with my sugar-free mission, but when I proposed that MY RULES also allowed me to drink wine four nights a week, he practically choked on his whistle. Eyes popping, ‘Four?’ he gasped. ‘You drink FOUR nights a week?’

‘Well that’s what I’m aiming for,’ I said. ‘I think three alcohol-free days is pretty good, isn’t it?’ Clearly not. Ross needs to meet my friends.

‘No,’ he said firmly. ‘Have you any IDEA how much sugar is in a glass of wine? You should only drink ONE DAY a week.’

ONE DAY? Is he kidding? But then, Ross gave up alcohol eighteen months ago – purely as a health challenge – and he likes being pure so much, he’s continued. I don’t think that’s on my agenda. I enjoy wine – especially chardonnay. A good chardonnay is like liquid gold to the palate – in moderation, of course.

Hmmm…. this could be a challenging relationship. Our views on drinking are dramatically opposed. But, maybe – just maybe – this is what I need? 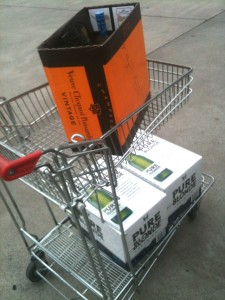 Regardless, I didn’t tell him my next stop after the gym was to pop in to Dan Murphy’s to buy a present for my hairdresser (Grey Goose Vodka) and to refill Fletch’s beer supplies. Friends often pop in at our place and there’s nothing more embarrassing than an empty fridge. Oh yes, I also picked up a couple of bottles of chardonnay…

But let’s get back to that resolution update. Here are my pathetic results from last week:

RESOLUTION UPDATE
(1) Sugar free challenge (apart from wine) – to stick to the ONE LINE RULE diet. (Which means not eating anything that contains more than 5% sugar.)
This is the only resolution I ALMOST get a tick for. While the THREE alcohol-free days rule doesn’t apply during holidays, I still managed two alcohol-free days, so I’m feeling okay about this one. Ross might not be impressed, but I am. 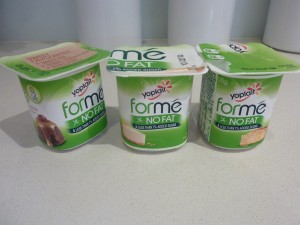 I did, however, have one major disappointment with this resolution, and it was by accident. I was helping myself to a serving of yoghurt for afternoon tea, when half way through, I thought I should ‘double check’ the sugar content, even though I was sure I’d already done that and I was fine.

BUT, this flavour – apple pie – comes in a six-pack and I discovered the sugar content I’d read was for ANOTHER FLAVOUR!!! Damn!! The apple pie yoghurt ended up being 7.4% sugar, so inadvertently, I’d stuffed up.

SO I get a cross for this resolution this week, but I will persist.
(2) Not to play I-Phone Games

I get a big, fat cross here too, because I played Baker’s Game – a form of solitaire – on my I-phone one night when I was finding it hard to get to sleep. It’s a bad habit I know – relying on an I-phone to get to sleep – but I blame Fletch. He won’t let me read (even with a reading light) while he’s sleeping because he says it wakes him up. Very selfish of him really, so I say it’s all his fault. But yes, I still get another cross…

This is an easy one. I have weeks ahead of me to get TICKS till the end of March! I am making progress though. Albeit slowly…

(4) To go to the gym at least 3 times a week
This is a tricky one as the disclaimer on this resolution, was “except for when on holidays”. Overall, I was NOT on holidays for half a week, (last week)  so it’s awkward to assess… I DID do a spin class this morning, but no, that’s only one visit to the gym for the whole week, so really I probably deserve a CROSS. Damn. It’s hard with the kids on holidays to find the motivation…

(5) To NEVER smoke another cigarette again

I get a tick here too, although I did willingly chase the smokers outside last night to stand near them and inhale their second-hand smoke. But I did NOT actually smoke a cigarette. Second-hand fumes don’t count. Another tick, thank you!

Overall, checking the scorecard, that’s only TWO out of FIVE. A poor result.I am taking myself off for time out in the naughty corner. I will attempt to pull my finger out next week. Promise. Surely with Ross on side I can do better? How are you going with your resolutions? I’d love to hear stories from someone else who’s finding it tough!