It was an appropriate venue – The Toff In The Town – to hold the annual Ned Kelly Awards, celebrating Australia’s best crime writers, as part of the Melbourne Writers Festival. From the outside, a dingy old building that hides secrets within. Even the 1950s tiled stairwell, cracked and stained, doesn’t prepare you for what lies ahead. A lush dark red restaurant with private dining booths lurks on the second level, boasting  a surprisingly good menu and great reviews. Then on the third, a dimly lit bar and band room oft sought after by high profile musicians wanting to play for an intimate audience.

It was here – the room dotted with small round tables and groups gathering in dark corners and hiding in the back shadows – that the Ned Kelly Awards got underway on Wednesday evening.

Jane Clifton, as MC, kept the night ticking over with witty banter between each of the main awards. It was noted by one presenter that the awards get bigger and better each year, proving that crime writing is indeed flourishing in Melbourne.

Hence the suggestion we build a huge ‘CRIMINAL’ figure at the gateway to the city – in keeping with other giant monuments around the country such as the Giant Pineapple, Giant Avocado, Giant Banana or Giant Blue Heeler. Yep, I reckon that’d be a sure-fire winner with the tourists…. But which crim would we pick? And where would he or she be placed? I think I’d rather just list the award winners than put my personal safety at risk by guessing and offending God-knows-who. 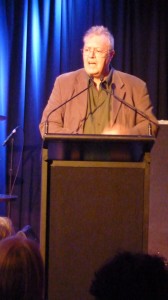 Peter Twohig, author of The Cartographer, won Best First Crime Fiction. He describes his novel, which is  about a young boy mapping crime in Melbourne as 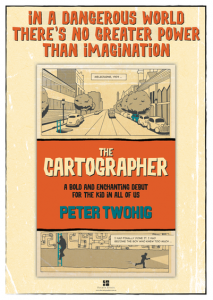 ‘A light look at some very dark stuff,’ and insists, despite much questioning from those who have read it, that it IS all completely fiction!

Eamonn Duff took out the award for Best True Crime for his book, Sins of the Father, which delves into the Schapelle Corby case and took three years to write. Happily for him, he couldn’t be there in person to collect the award as he is already overseas promoting his book in the UK. Short story writers were also recognised; this year’s SD Harvey Short Story Award going to A.J. Clifford for Summer of the Seventeenth Poll. 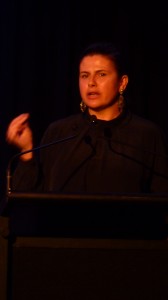 Described as an unsettling novel, Pig Boy, by J. C. Burke was awarded Best Crime Fiction. Burke also took three years to write her book, which focuses on troubled teen Damon Styles and what happens after he is expelled from school on his 18th birthday.

The highlight of the evening was the presentation of the Lifetime Achievement Award. This year’s winner was flagged as complex, compelling and cutting-edge, whose publisher promotes her as Australia’s Queen of Crime. And the winner is…. 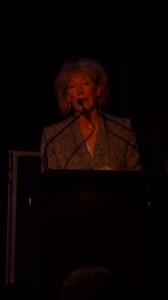 And yes, it was VERY dark in the room…sorry.

Over the course of her career, Lord has written 15 novels, a children’s book, won the Ned Kelly Award for Best Crime Fiction in 2002, and wrote the highly popular Conspiracy 365 Young Adult series, which has since been made into a television series.

Congratulations to all the winning authors.