For most writers, the dream begins at an early age. That burning desire to create a book that you’ll one day hold in your hands – physical proof you’ve achieved your goal of becoming a published author. It’s the validation most writers seek that their words really do have some merit.

These days it’s harder than ever to have a book published that’s printed on paper. The increasing popularity of e-books is taking a toll on many a writer’s dream. All the more reason for author Ailsa Piper to be celebrating, with news this week that her first book, Sinning Across Spain, is to be re-released one year on, in the smaller B format, coming out in April.

But sometimes reality falls short of our dreams, so I’m curious to find out if Ailsa’s experience has lived up to expectations. Having a book published is also the start of a long journey – promotional commitments, signings at bookshops, media interviews, appearances at writers festivals – all very much a part of what needs to happen to generate a buzz about your book. Has it been everything she’d hoped for?

‘It’s still continuing,’ said Ailsa. ‘The thing I didn’t realise, being a first-time author, is that it can be six months or a year and you think the book has done its dash, and then suddenly a letter comes in talking about it transforming someone’s life or you’re invited to another writers festival – so it’s been an amazing journey.’

As well, the subject matter of Ailsa’s book has led to some added complications. It’s a real-life account of her travels, hiking through north-west Spain and following a long-held tradition of carrying other’s sins to buy forgiveness. That’s not because Ailsa is deeply religious – rather she was exploring a spiritual concept to help her write a play, unaware at the time her experiences would end up becoming a successful book. 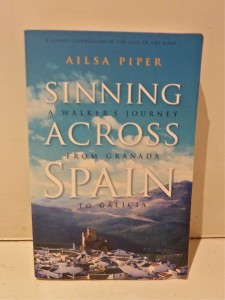 ‘Because this book is about confession, people have made a decision on some level that I’m the vault and can keep secrets, so they tell me extraordinary things. In fact, in the last few months, because of the royal commission into sexual abuse and the fact that the book deals with someone’s whose brother committed suicide as a victim of abuse by a cleric – that has led to people telling me about the abuse of their children, their siblings… That’s been quite hard but I’m also very aware I’m privileged to receive their stories.’

I imagine that could be quite a lot for one person to carry. Is the weight of such stories sometimes too much to bear?  ‘There was a day last year where I felt my heart would break because I had about six people at one book signing come up with those stories and then I came home and heard from someone I know, who had had a similar experience and it came very close to home. I don’t have much to offer except to listen, but I’ve come to understand that listening is not a bad thing. It’s small thing, but it’s something.’

But the subject of abuse is just one of many issues raised in the book. In fact, Ailsa says she’s often surprised by the number of ways readers have interpreted her work. ‘It depends on the reader,’ she said. ‘Some people read it just for the story about the Camino and there are people who read it because they love the poetic nature of the descriptions about landscape and Spain. Others go into the morality side of things. It reminds me that a book is co-written by the reader, in a way that has really surprised me. One person’s experience of the book can be completely different to another’s.’ 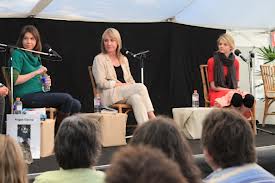 Part of the book’s success has led to Ailsa being invited to many writers festivals – definitely an upside of sinning. In the past year, she’s been part of festivals at Airey’s Inlet,  Byron Bay, Daylesford, Perth, Denmark and Albany. Next on the agenda is the Sydney Writers Festival in May. The main benefit of these, says Ailsa, is that they open the book up to an audience who may not have known about it.

I’m sure part of the reason for Ailsa’s book finding such a broad audience is that it appeals to those interested in pursuing a spiritual quest that isn’t necessarily religious in the traditional sense. Ailsa herself was brought up as a Catholic, but her parents divorced when she was little, and she was never forced to go to church.

‘I loved all the rituals – the candles, the incense – I still love all that. But I was always angry I couldn’t be an altar girl and that thing about a woman’s place in the church was frustrating, so I had skepticism from early on. I wanted to believe, but kept questioning things. Even on the walk, I wanted to believe and that’s why I kept going to churches. I really do envy people who have their faith.’

For myself, I found the book satisfying in that Ailsa’s long and arduous quest in Spain does lead to a form of spiritual realisation. I don’t want to give away the ending, but I think it’s something many will relate to. And it doesn’t mean you’ll feel any pressure to get to church every Sunday. But you might want to put on your walking shoes and appreciate the here and now, instead of trying to get to heaven.