When I left the Howard Fine Masterclass Theatre in Footscray on Saturday evening, I was zinging. My feet didn’t touch the ground as I walked to the car, my head was in the clouds and I got lost twice driving home.

Performing live when the stakes are towering is a massive adrenalin rush. I would grab this feeling and bottle it if I could. To take a risk, put yourself ‘out there’ and come away feeling you’ve achieved a breakthrough is a phenomenal high. Very few major life experiences come close.

That morning I had blogged about my fear and trepidation about performing and how my 15-year-old son Tom, had given me a ‘talking to’ about making the most of a wonderful learning experience, instead of worrying so much.

But I think my previous blog was a little misleading on another level, in that I probably spent too much time talking about one pair of actors who copped some criticism. I know now why I focused on that. I was projecting my own fear about my own performance. That stood out for me because that was what I dreaded the most.

But I’ve heard a lot more in the past few days from both Howard Fine and David Coury which better explains why they use tough love. As Howard said, ‘We’re going to kick your ass and we’re not going to let you get away with any bullshit but we’ll do it with love.’ As he also pointed out, ‘You can’t help someone without being critical.’ True.

From David came, ‘By my applying pressure, you know that I care.’ And it was through the pressure and encouragement of both teachers that we saw changes in performances that were inspiring. 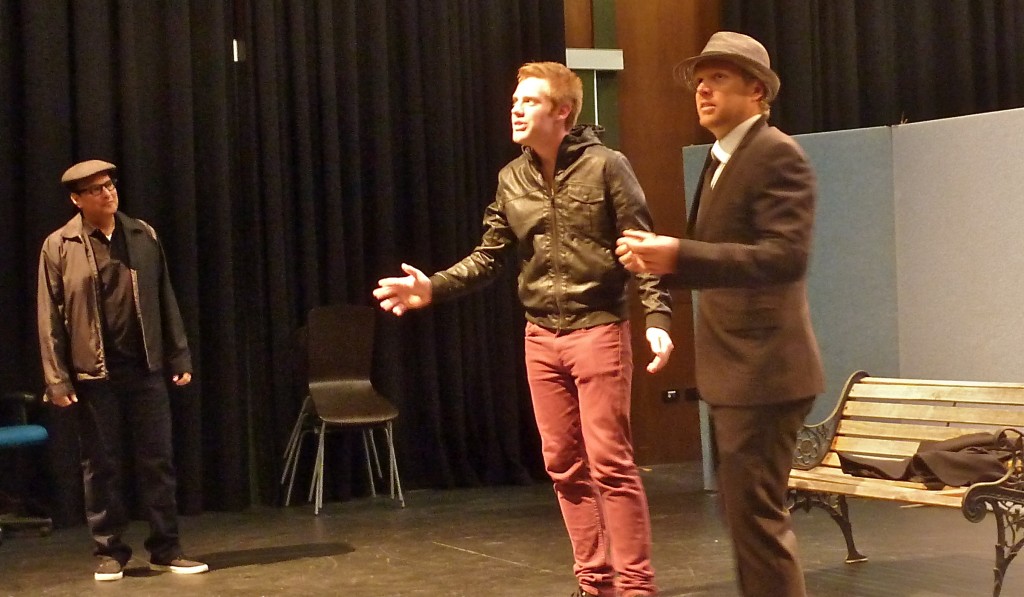 One such moment arrived when David urged a young actor, Chris, to REALLY express the words ‘I’m in love!’ in a scene with his friend in Central Park at 2am. After several attempts, David got Chris to sing aloud various lines from the scene and to find the feeling in the words. Then he stopped him mid-song and said, ‘NOW say it to us.’ Chris instantly turned to the audience, arms spread wide, face shining and burst forth with ‘I AM IN LOOOVE!’ so convincingly that I’m sure there wasn’t a dry eye left in the auditorium.

Another moment was a hilarious scene performed by Sarah and Cat where two bridesmaids are talking over a bottle of champagne in their hotel-room, after their best friend’s wedding.

Yep, their dresses are a bridesmaid’s worst nightmare, but that works well with the comedy played out on stage. I thought both girls were brilliant. Then Howard chatted with them about creating from ‘joy’ and embracing new ways of trying things. He talked through a few crucial points in the scene and the girls gave it another run. He had given them permission to make mistakes and have fun. The end result was amazing. Even funnier and sharper than their first performance – and I’d thought their first go was good.

There’s also an incredible feeling of support from the audience at the Masterclass. A lot of the crowd are fellow students with whom you form a camaraderie and connection. Each of you is processing one heck of a lot of emotional baggage – from yourself and the connections you make with your character. Many of the actors end up in tears, but not because they’re distressed – because they’ve pushed themselves to the point where they’ve made a wonderful discovery that has opened up something new, deep inside.

Then, after six pairs of actors had done their thing, it was our turn. Lucky last… As I mentioned on Saturday, I’ve been fortunate enough to be paired with the very talented actor, Samuel Johnson. We were both nervous and I tried to remember Howard’s advice. ‘Creativity creates terror. You must give up control. Don’t use technique over spontaneity.’

Easier said than done. As we began the scene, I took a seat at the table of an ‘outdoor cafe’, waiting for my estranged husband, Dennis. I picked up my cup to take a sip and my hand shook so much that coffee spilled over the side. Arghhh…. not a good start.

We were performing Scene Five from Christopher Kyle’s The Monogamist. I’m a University Professor who has been with poet and academic, Dennis, for fifteen years, but only married for the last six months, during which time our relationship has hit the skids. Dennis has found me in bed with a student three days earlier. We are having coffee so that I can try and win him back. It doesn’t go well… especially when Dennis admits to sleeping with a young woman two days ago.

Sam was brilliant and while I was a million miles from fabulous, I think I was passable. I didn’t forget my lines and I didn’t faint from terror.

Samuel Johnson and myself learning about our performance from Howard Fine

When we finished, I saw David Coury sitting in the front row, nodding his head and smiling encouragingly. Phew, that had to be a good sign? Then Howard joined us on stage, and talked through stuff about my character, Susan, and every note rang true. I had played the beginning of the scene being very anxious and sad when meeting Dennis, because of the guilt I was carrying about my infidelity. In a kind voice, Howard talked through how I needed to ‘open my heart’ and ‘choose to care’, about  the situation. For instance, wouldn’t I be looking as if I were happy to see Dennis? Isn’t he the love of my love? Wouldn’t I greet him warmly? Yep, that made sense. Most people do try to cover their discomfort and mistakes.

Then we talked about my reaction to learning of Dennis’ infidelity. Howard suggested I was a little non-plussed on hearing the news. I interupted to say, ‘Oh, you mean be a bit more like…’ At which point he interrupted me. ‘Ah, no, no, no, no! We’re not telling you how to play a role – be this, be that. We’re looking at the human condition – what is it about and where does that live inside of me? If you make him (Dennis) the love of your life, the thought of him with another woman takes care of itself.’

‘Fighting for control is interesting. Being in control is not. Make yourself vulnerable. And then be okay. There’s a Grand Canyon between being okay and trying to be okay.’

There was a lot more than that, and I am not doing justice to Howard’s incredible ability to communicate and his turn of phrase, but that will have to do in summing up. And it really did make sense. None of the feedback was upsetting or directly critical. It was accurate and only served to make me want to give the scene another shot, taking on board Howard’s words.

Then David Coury joined us on stage. He’d clocked that nerves had been an issue so gave both Sam and I a much-needed lesson on breathing deeply from the diaphragm. 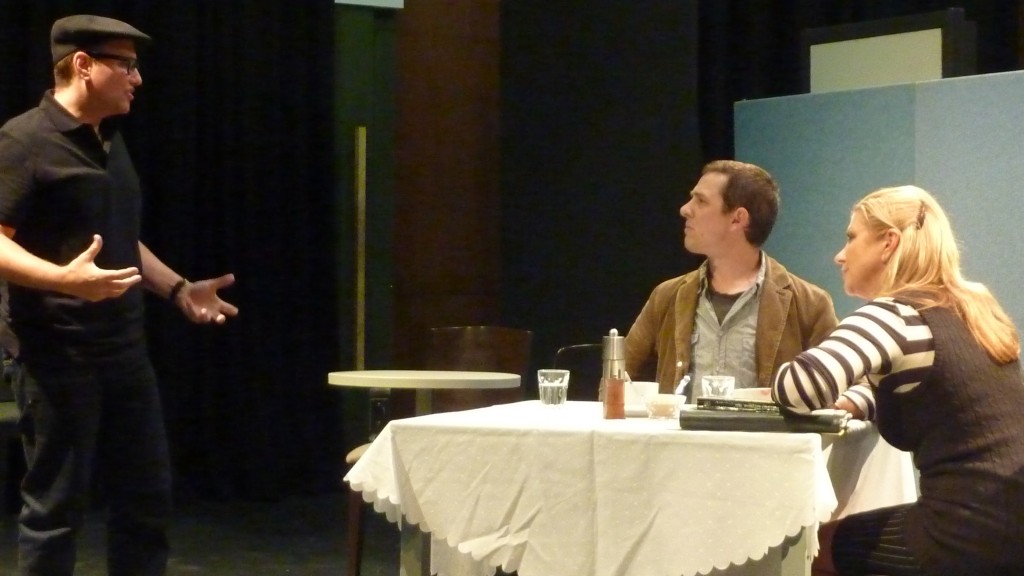 David Coury coaching Sam and myself

Then he called on us to vocalise emotion by yelling a scene at each other. I thought I’d practically burst both lungs, but when we were done, David smiled at Sam but turned to me and asked, ‘Did you think you were yeling at full volume?’ ‘Yes, absolutely,’ I said, fully confident.

‘You didn’t,’ he said firmly. ‘What if you were calling out to a loved one or a friend who was about to be hit by a truck? Think of someone and call that out. NOW!’ Without thinking, I imagined my baby (of course he’s not now – he’s a big strapping 15-year-old) being hit by a truck and screamed ‘TOMMY!!!’ with all my heart. That worked. I think people clapped. David was happy. It felt good. (I’d saved my son from a fatal accident, after all!)

We did our scene again and it was better. But there’s still room for improvement. Especially from me. We’ve been rehearsing as much as we can and now we get one last shot today – our last day of the Howard Fine Masterclass. Wish me luck. I’ll let you know how it went. But the best thing – this time I’m actually looking forward to it.