Christmas single ‘If you want a Happy Christmas’

So let’s start with the good news… The talented musical trio, THE PACIFIC BELLES, have been chosen to represent Australia in the upcoming World Championships of Performing Arts in LA. They’re a brilliant act who some of you may remember, also starred alongside Fletch in the making of a Christmas song last year, which proved a hit in the UK.

Now the bad news is there’s a chance The Pacific Belles might NOT be able to take up this opportunity of a lifetime – and it all comes down to sponsorship. Like athletes who need support to compete on the world stage, so too, do our most talented performers in the arts arena.

The official World Championships of Performing Arts celebrates its 18th year, in July this year and is universally cited as the one-and-only official global event for performers and entertainers both amateur and professional. It’s pretty much the Olympics of the Performing Arts.

Each year, more than 75 scouts and national directors scour the globe for outstanding talent to take part. More than 75,000 applicants from 50 countries auditioned to participate in this year’s event, which will be staged in West Hollywood.

But taking part is an expensive venture. I spoke with singer and PACIFIC BELLES manager Laura Monaghan about how they’re going about trying to raise money through a POZIBLE crowd-funding project. Jump on board and help if you can by going to this link:

http://www.pozible.com/project/180216
Q: How did the Pacific Belles come to be chosen to represent Australia in the World Championships of Performing Arts?

LAURA: Last year we were very lucky enough to be asked to be the support act for Tyla Bertolli from The X Factor. We got to perform at her single launch for her song ‘Burn’ and she suggested that we apply to be contestants in The World Championships of Performing Arts. Tyla is also a scout for WCOPA, she took part last year and did really well from it. We thought it was a huge opportunity so we auditioned, 75,000 applicants from 50 countries later we got picked!

Q: How did the Belles form as a group and why the fascination for music from yesteryear?

LAURA: The Belles have been performing together for nearly a year now, we formed after I (Laura Monaghan, Manager and soprano singer) set it up and auditioned for other girls to sing with. I grew up with a love and fascination for the 1940‘s and old Hollywood. The Andrew Sisters and Doris Day are my all time favorite. The two other Belles are also obsessed with the fashion and the music of yesteryear and we love the glamour. We joke that we were all born in the wrong era!

Q: Why doesn’t the organisation that picked the performers fund the trip to LA?

LAURA: Obviously we wish that whole trip was funded but I think that WCOPA rely on sponsors to keep the event going each year. We are currently looking for Aussie brands that would benefit with some international exposure to sponsor us. We would love to be sponsored by a make up or vintage clothing brand.

Q: How important is it to you and the Pacific Belles to go to LA?

LAURA: It would mean the world for The Pacific Belles to get to go to LA and perform in front of industry professionals. The whole experience to be apart of such a huge competition “The Performing Arts Olympics” as they call it will be amazing. I am extremely proud with how far The Pacific Belles have come in a year and to be asked to represent Australia doing something we love would be an honour. 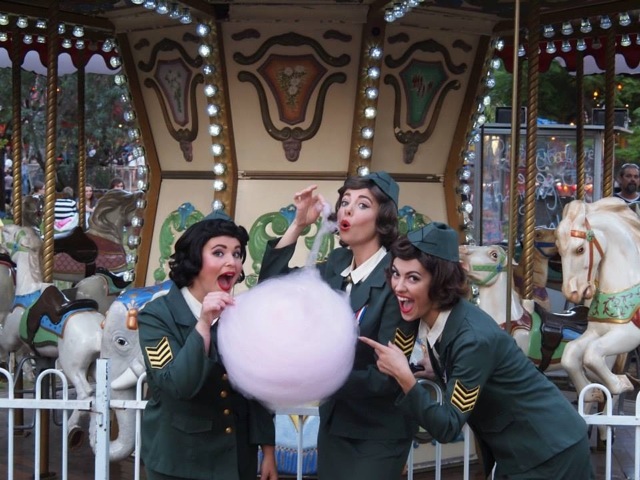 Help the PACIFIC BELLES savour the sweet taste of success

Q: What do you hope to achieve by competing?

LAURA: We obviously hope that we will do well from the competition and that we’ll bring back at least one gold medal for Australia. I think that would be an achievement enough. Although saying that we have our fingers crossed that our trip to the states could open a few career doors for us too.

Q: Why did you decide to go ahead with a ‘Pozible’ crowd-funding campaign?

LAURA: As well as a few main sponsors we need to raise some money for the expenses of the trip and crowd funding seemed like the way forward as we have a lot of support from our friends and family and also fans. Pozible is a really easy to use fund raising site and offers rewards for pledges. We have rewards from just $10 and every little bit helps but we can’t believe it – someone has already pledged $1000 to have us perform at their event!

Q: Is the fund-raising campaign a lot of work?

LAURA: Yes, it is a lot of work. We can only hope we reach our target of $10,000 on Pozible. We have decided that in return for your pledges we are going to give back to the community. When we reached $2000 we performed at an Age Care home. Next milestone $4000, we will go and perform for children at a children’s hospital. These are our most rewarding performances. The other day we met a lady who was 102 years old! We’re also planning a fund-raising event next month.

Q: What are your long-term goals for the Belles?

LAURA: Our long term goals for The Pacific Belles are to keep spreading our sound around Melbourne and to tour Australia. We also hope to record an album with a jazz band, perform our show on a larger scale and visit other countries – LA being one of them!

We wish the PACIFIC BELLES all the best with their fund-raising. Don’t forget, go to this link if you can help – every bit counts!