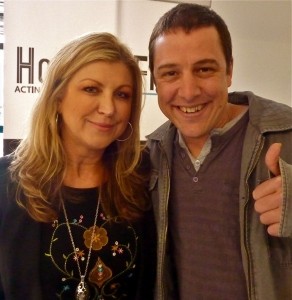 Me with Samuel Johnson

I first met Samuel Johnson last year, after enrolling in the Howard Fine Acting Studio master class. World-renowned teacher Howard Fine was himself visiting Australia to teach this course and it seemed like an incredible opportunity to hone my rather limited acting skills. Sam was assigned as my ‘scene partner’ and knowing his enormous talent from watching him for years on the hit TV show ‘The Secret Life of Us’, I was a tad daunted at the prospect of working with him.

Luckily for me, Sam has an extremely generous spirit, and was patient and encouraging with my lack of expertise. It was an absolute delight working with him and I’ll be forever grateful for his support. Getting up in front of an audience, knowing your performance is to be critiqued shortly afterwards, is terrifying and I was reassured that Sam also found the experience, not only rewarding, but nerve-wracking.

But if you think that sounds challenging, wait till you hear about Sam’s next project. It is truly inspirational.

Tragically, Sam’s sister Connie is dying of breast cancer. In a bid to raise awareness and ONE MILLION DOLLARS for the Garvan Institute to conduct research, Sam is going to set a new world record – riding around Australia on a unicycle. You’d think riding a bike alone would be tough enough – but on such an ungainly contraption? Sam’s aim is to break the Guinness Book of Records world record for the longest distance covered on a unicycle.

Sam with his sister, Connie

The launch is going to be massive and you’re all invited. It’s kicking off just after midday in Federation Square in Melbourne, on Friday, February 15th. Put it in your diary now! Sam wants as many people as possible to turn up, to form a human corridor for him to ride through and cheer him on his way for the start of his epic journey. 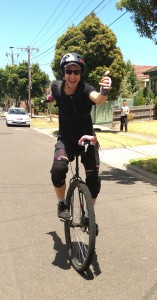 Sam on his unicycle

It will be a stirring event, with a 40-strong drumming band from Mornington High School beating out their support as well as other entertainment. And while the drums beat louder and louder and the cheering from the crowds reaches a crescendo, Sam will ride off the stage, through the human corridor, to begin a ride that may take the entire year.

Channel Ten’s The Project is also supporting Sam’s ride and will be covering the launch with a feature piece that evening, as well as stories during the course of Sam’s ride. Sam’s thrilled to have the program’s backing, knowing how important it is to raise national awareness for his mission to be a success.

There’ll also be a one-hour program on Network Ten, documenting his ride when he finishes. Sam’s first port of call is Melton, before heading off to Adelaide and then Darwin.

It’s taken a long time for the ride to become a reality. Much planning and sponsorship sourcing has been taking place, ever since Sam and Connie came up with the idea. 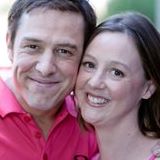 ‘My sister, Connie, was diagnosed with breast cancer two years ago,’ he said. ‘As often happens, this brought us all closer and we were keen to find a way to turn the negative into a positive. In facing her own mortality, my sister was forced to confront the issue of her legacy. She’s determined to leave a large one. And she’s desperate to prevent even just one other young mother from befalling the same fate.’

‘Not being able to see that through is obviously a cause of great pain and sorrow for her,’ said Sam. ‘In a way, this event we’ve hatched together serves as a way to show the kids the kind of spirit she encompasses. It’s not just something to keep her ‘up’ as she goes down… It’s not just an appeal for every woman in the land to be breast aware. It’s a chance for us to prove together to our families that you can do anything if you put your mind to it. No matter how bad the situation is.’

I was curious as to why Sam chose a unicycle as his form of transport. Turns out he’s already taken a long trip on a unicycle – riding from Sydney to Melbourne to raise money for the children’s cancer charity, Canteen, which helped Connie in her early years. Connie is not only battling breast cancer now – she survived two earlier bouts of cancer when a child. On that ride alone, Sam raised half a million dollars.

‘Obviously, with her diagnosis being so grim, we needed a concept that gave us the best way to remind every mum in the land to be breast aware. One of the best ways we could think of to do that was to go around the country and engage directly with communities.’

For Sam, the unicycle gives him a point of difference and attracts a lot of media interest. ‘I had to find something that hadn’t been done before,’ he said. ‘Otherwise I’m just another charity gig.’

The unicycle itself poses many difficult challenges. It’s much slower than a regular bike, so Sam will be in the saddle for up to EIGHT HOURS A DAY. Sam admits he prefers riding a bicycle but is willing to do it tough if it makes his mission a success. ‘There’s a greater margin for error with a unicycle and it requires an enormous amount of concentration and physical aptitude,’ he said.

A good point, I thought. So what happens when the going gets rough – when he’s faced with rocky dirt roads – and God knows, there are plenty of those circling our sunburnt country. Sam just smiled.’ Well of course they’ll hurt the ball-ios a bit more. And it sounds strange, but you get used to the pain.’

Ouch. Doesn’t sound like fun… I’m just starting to get a sense of how physically testing this journey is actually going to be. Sam though, is well aware of what he’s in for. ‘It’s going to be extremely painful and painfully extreme,’ he said. ‘But I won’t be enduring half of what my sister is going through.’ 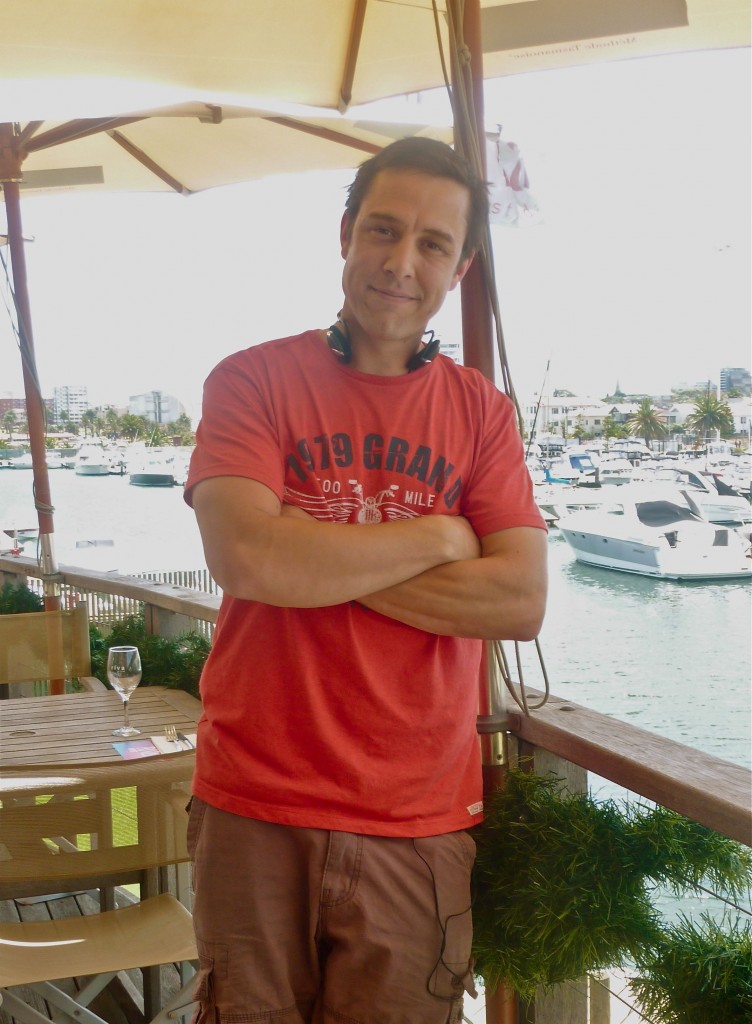 Sam’s training schedule has been arduous. He’s had to achieve an almost professional level of fitness to be able to conduct the ride over the distance he’s planning. ‘It sounds incredibly simple, but in amongst all the madness of putting my life on hold to organise this event, I’ve got to constantly remind myself that fitness is paramount. I cannot condition my body enough for this task. But I’ve got to be sure that on Day One, I’m the fittest I can be. As well, psychologically it’s going to be an amazing test.’

For this purpose, Sam gave up smoking and drinking several months ago, and says he’s enjoying his fitter lifestyle. Lunching at Riva, there wasn’t a ciggie in sight, nor did a drop of alcohol pass his lips.

I asked Sam if he’d miss acting while taking a year off and would he return to it when the ride was done. ‘Who knows what I’ll want at the end of this crazy thing?’ he said. ‘I imagine I’ll essentially stay the same person. After all, I don’t know how to do anything else, so I don’t know what else I’d go back to. But I can only think of the bike ride right now.’

So is he confident he’ll actually make it around Australia? Does he hold any doubts? ‘Healthy doubt, yes. True doubt – no,’ he said firmly. I believe him.

Sam’s hope stems from the fact that Connie has already defied medical predictions for her health. ‘But once she goes downhill, I suspect it will happen within weeks. Should she die while I’m doing the ride, I’d fly back for her funeral then fly straight back to continue on the road an push even harder. We’ve talked about that. Either way, she knows I’ll finish it.’

As I said, Sam’s mission and attitude are truly inspirational. I know I’ll be there cheering him on when he heads off from Federation Square. I’ll hope you’ll join me.

And to keep up-to-date with all the news about Sam’s epic journey, check his Facebook page at https://www.facebook.com/loveyoursister